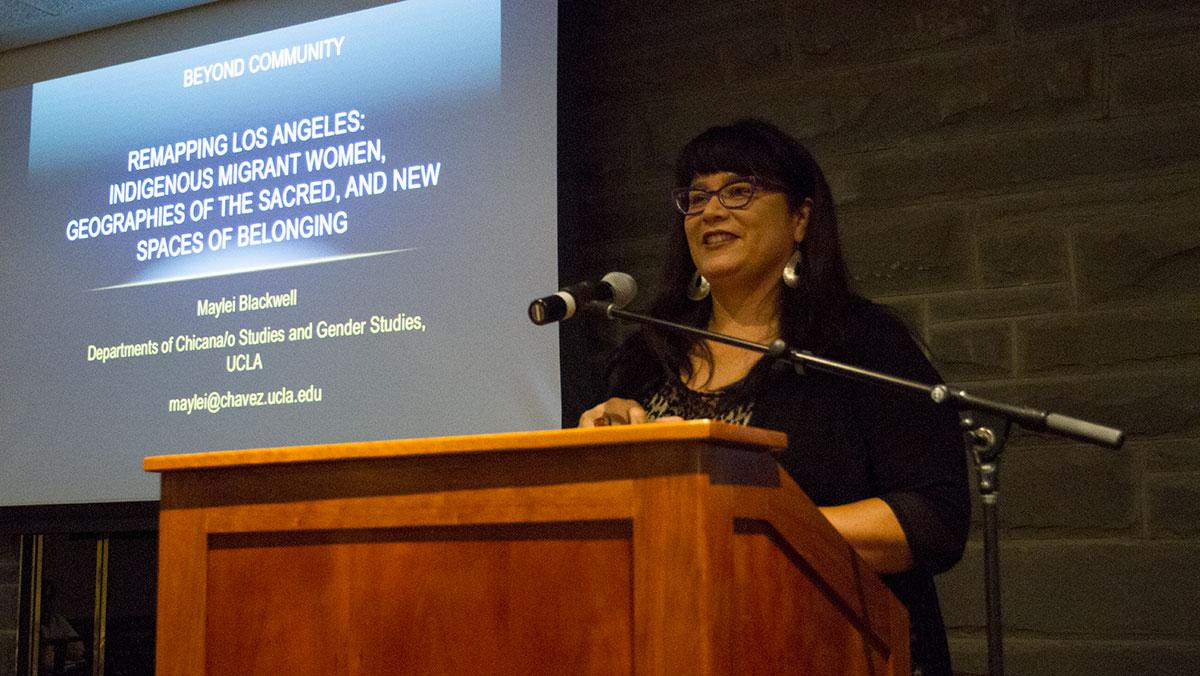 Marissa Booker/The Ithacan
Maylei Blackwell spoke about transborder gender and identity as a part of a discussion series hosted by Ithaca College’s Center for the Study of Culture, Race, and Ethnicity.
By Meredith Husar — Contributing Writer
Published: September 23, 2015

Maylei Blackwell presented her work on “Transborder Gender and Indigeneity” Sept. 21 as the first speaker in this year’s discussion series hosted by Ithaca College’s Center for the Study of Culture, Race, and Ethnicity.

Blackwell, associate professor in Chicana/o Studies and Women’s Studies at the University of California, Los Angeles, is the author of, “¡Chicana Power!: Contested Histories of Feminism in the Chicano Movement,” which tells the story of the rise of Chicana feminism throughout southern California and the Southwest. Her research has focused on women’s social movements in the U.S. and Mexico, as well as the challenges of organizing across national boundaries.

The discussion series is a yearly event hosted by the CSCRE, and this year’s theme is “Beyond Community.” The theme “explores and problematizes the concept of community,” with the invited speakers giving their insight on the implications and impacts of community, according to the CSCRE website.

Belisa Gonzalez, associate professor and director of the CSCRE, opened the series with rhetorical questions on the idea of community.

“We are always working towards defining and building community, but what is beyond it?” she said. “What if it is not the utopia we want it to be?”

Blackwell explained her research of the complicated ways that “community” is being reconfigured in LA with indigenous peoples migrating to the area from Latin America. Her research focused specifically on indigenous women and the challenges they face in advocating for themselves while being caught up in cultural and institutionalized systems of oppression.

“I want to start by recognizing that we’re on indigenous land,” Blackwell said at the beginning of her presentation.

After being displaced through governmental policies, Native Americans have been migrating to LA to live and work, causing the city to become a transnational hub for indigenous people. Blackwell spoke specifically about the Oaxacan people — one of the largest urban Native American populations in LA.

Blackwell said indigenous migrant women often face gender discrimination on both an institutional and cultural level. She said lack of education and language barriers, among other factors, make it difficult for these women to advocate for themselves. Blackwell shared the stories of some of the women whom she has met throughout her years of research, with narratives including sexual abuse and denial of access to education.

Students and faculty from the college as well as Cornell University and Wells College gathered in Clark Lounge to hear Blackwell speak. An open Q&A followed Blackwell’s presentation.

Chandler Smith, one of the many students who traveled from Wells College about 40 minutes away to attend this presentation, said she enjoyed Blackwell’s extensive insight.

“I learned so much in this hour, it’s crazy,” Smith said. “I came in not really knowing what to expect — Chicana Studies is a pretty new topic to me. So coming in and having such a breadth of knowledge placed in my hands, and now carrying around the responsibility of this conversation that we had, is really immense.