Kristen Harrison/The Ithacan
The Office of International Programs and Extended Studies has announced that summer and winter undergraduate tuition rates will be discounted by 30 percent.
By Madison Fernandez — News Editor
Published: January 28, 2019

The Office of International Programs and Extended Studies has announced that summer and winter undergraduate tuition rates will be discounted by 30 percent.

Set to begin during the summer 2019 session, tuition will be $1,056 per credit for most academic programs and online courses during summer and winter sessions, the Office of Extended Studies announced in an email sent to to the campus community Jan. 9. This discount rate is the highest ever offered for intersessions, said Jennifer Wofford, director for extended studies.

The announcement comes months after the Ithaca College Board of Trustees approved its highest increase for tuition since the 2014–15 academic year. For the 2019–20 academic year, tuition is set at $45,275, a 2.95 percent increase from the 2018–19 academic year. 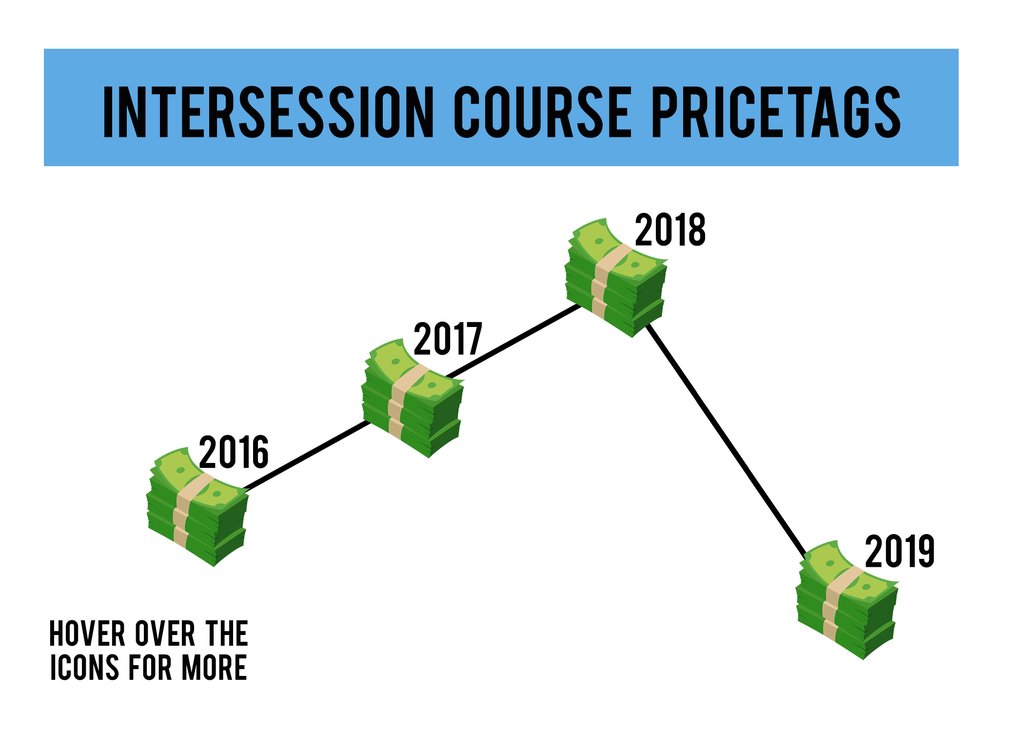 Wofford said the decision to increase the discount rate for intersession courses was inspired by an analysis of student success rates. She said students that were academically at risk with a GPA lower than 2.5 earned higher grades in summer online courses compared to coursework done during the academic year.

“Increasing the chance that a student would succeed and stay at IC was agreed to be worth the risk of the revenue that might be lost by the increased tuition discount,” Wofford said via email.

Wofford said she hopes the discount will encourage more students to participate in summer and winter classes. On average, 500 undergraduate students register for summer courses each year, including internships, fieldwork, private lessons and independent studies, and 180 undergraduate students register for winter courses, Wofford said. The majority of these classes are taken online, and Wofford said the hope is to get more students to enroll and take classes on campus during the summer because of the increased discount rate.

Marie Blouin, associate professor and chair of the Department of Accounting and Business Law, teaches Financial Accounting, a course also offered during the academic year, over the summer. Seven sections of the class were listed on HomerConnect for the 2018–19 academic year, and five of those sections were either at capacity or over-enrolled. However, Blouin said she only has about five to 10 students enrolled during the summer.

Because Financial Accounting is an introductory class that is taught at community colleges around the country, Blouin said, she sees many students transferring the course in for credit because it is often cheaper to take the class elsewhere. For instance, at Tompkins Cortland Community College, web-based courses are $181 per credit hour. Blouin said that while this may be cheaper for students, the outside course may prepare students differently compared to the course offered at the college. She said she hopes the discount will make the college’s intersession courses more appealing for students to take.

“It’s been kind of frustrating,” she said. “I’m really hoping that this will make it easier for Ithaca College students to take that important core class through Ithaca College rather than somewhere else.”

Some students view the summer sessions as a way to get ahead in their classes, especially for the Integrative Core Curriculum. Senior Anna Gardner, who is enrolled in a dual degree BFA and BA program, took Personal Health during the summer 2017 session and Introduction to Logic during the summer 2018 session as a way to take ICC courses in order to graduate on time. She said she thinks the tuition discount is beneficial for students also looking to complete some of their requirements.

“To be able to take a class over the summer is really helpful in that it’s one thing you can focus on, especially for nonmajor classes,” Gardner said. “My time is so much more well spent when I’m on campus.”

Sophomore Alexis Bingham said she wanted to enroll in Personal Health during the winter 2019 session in order to finish her ICC requirements as well. Even with the discount, she said she still does not think it is worth paying extra for a class she could take during the academic year.

“Winter courses are so short compared to a full semester course, so I don’t see why we should have to pay so much for them,” Bingham said. “Plus, we’re not using the college’s space for the online courses, so I feel like that should make it cheaper.”