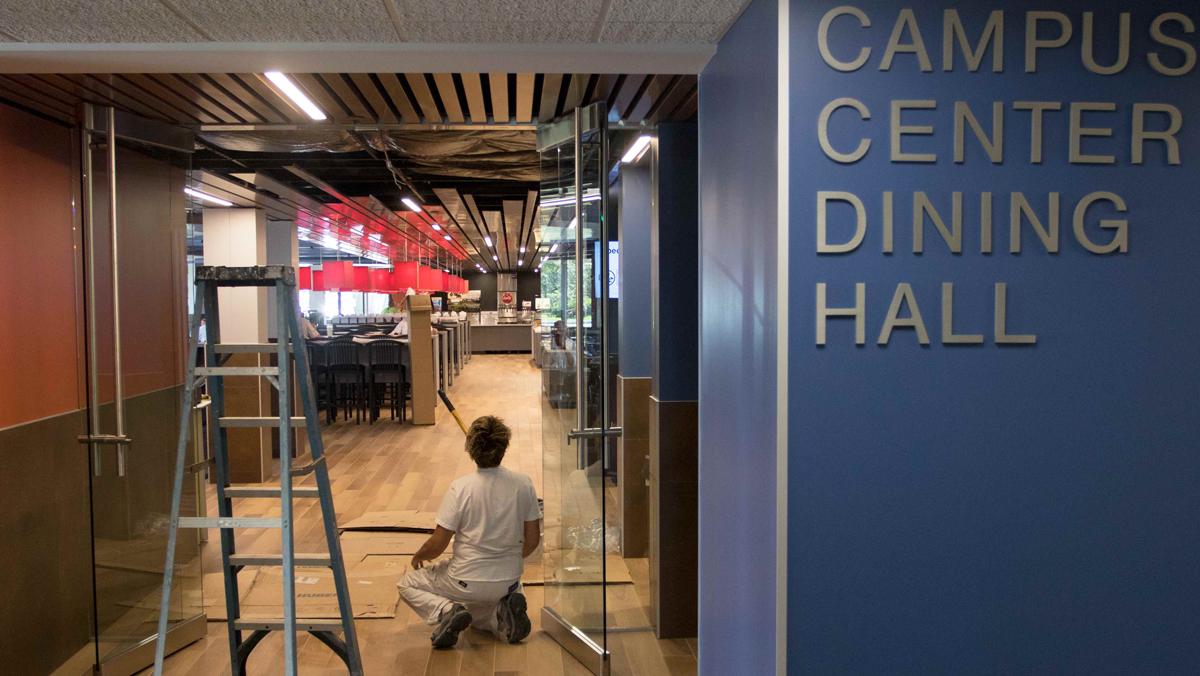 As students return to campus for the fall semester, they will notice that Ithaca College looks different than when they left at the end of the spring semester. The college has used summer break to make a number of cosmetic and technological improvements to the campus, including renovations to sports fields, the Campus Center Dining Hall and the Towers Residence Halls.

The school is celebrating its 125th anniversary this year and has chosen to update a number of both academic and residential buildings. Tim Carey, associate vice president for facilities, said that while none of the buildings are in particularly bad condition, some of them still have furnishings from when they were originally built 50 years ago. Carey also said a majority of the projects were funded by the Office of Facilities’ approximately $14 million deferred–maintenance budget, with other projects requiring additional funding from the recurring capital fund.

“What we’re trying to do is take some of these aging buildings and strategically execute projects that enable us to make them younger,” Carey said.

The Office of Facilities focused on three major projects for the summer: the addition of a retaining wall to Butterfield Stadium, remodeling of the Campus Center Dining Hall and renovations to the Towers Residence Halls. The retaining wall, which will prevent hillside erosion, is scheduled to be finished by the end of August and cost approximately $1.2 million, according to the school’s 2017–18 approved budget.

Some of the more noticeable renovations are those made to the Campus Center Dining Hall, including a redesigned entrance, new lighting and furniture, and an added check-in counter to admit students quicker during peak dining hours. Jeff Scott, director of dining services, said one of the goals of the renovations was to modernize the hall both cosmetically and technologically to meet the needs of users.

“I think that we’re fortunate that we have frequent engagement with student leaders and social media,” Scott said. “We get a very ‘now’ pulse of what people want.”

The college renovated the Terrace Dining Hall last summer. Carey said the positive feedback from students and faculty is part of why they wanted to continue with the Campus Center Dining Hall. The renovations to the Campus Center cost approximately $850,000, according to the college’s 2017–18 approved budget.

“We were fortunate as an institution to be able to update the Terrace Dining Hall last summer,” Carey said. “So, to be able to do the second major dining hall this summer was really good for our college, and I think that the students will definitely benefit.”

Incoming freshmen will have a new layout in the Towers Residence Halls. Besides repainting, reroofing and replacing the windows in the entirety of West Tower, new additions include four individual bathrooms per floor instead of communal bathrooms for all of West Tower and floors eight through 13 of East Tower. Water fountains and sinks have also been added to the hallways of each floor, and the eighth floor of both Towers were remodeled to have a large lounge replacing the space that used to be single rooms. to be one large lounge for hosting large events.

East Tower is about halfway finished with painting and maintenance and is scheduled to be completed next semester.

Jenny Pickett, assistant director for residential life, managed the Towers project over the summer and said plans for the Towers took into account feedback from the community. Last year, she spoke with members of the Residence Hall Association, who said they wanted to see more bottle–filling stations, more occupancy sensors in the lights, and privacy improvements.

Other improvements to the campus include the replacement of Higgins Stadium’s turf and the Wheeler Tennis Courts; the addition of gathering spaces around campus, including a new patio outside of Terrace Dining Hall; and the repaving of the U-Lot, O-Lot and P-Lot to meet Americans with Disabilities Act standards.

Carey said that while most of the major work has been completed, a few projects may bleed into the early part of the fall semester. He said it will not be disruptive to the students.