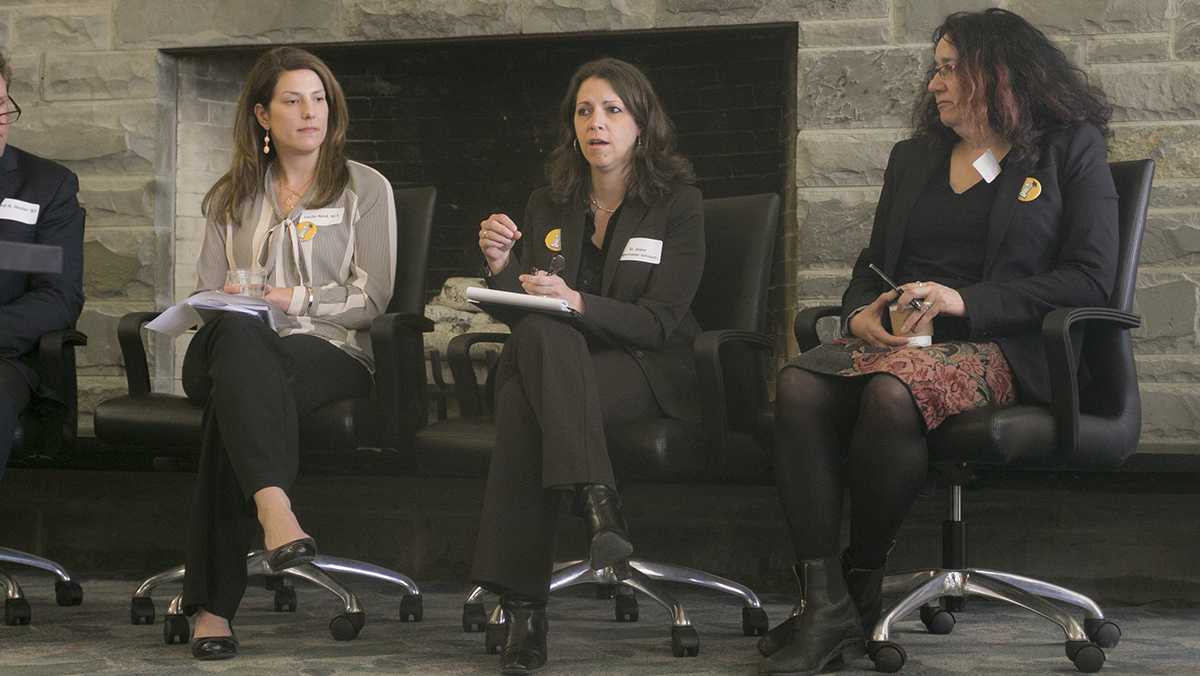 Many first-generation college students deal with roadblocks during their college career, but their struggles are often overlooked, according to panelists who discussed their experiences at the First-Generation Faculty and Student Discussion Panel at noon March 31.

The panelists were Fae Dremock, assistant professor of environmental studies and science; Jeane Copenhaver-Johnson, interim associate dean of the School of Humanities and Sciences; Paul Hesler, director of principal gifts; Leslie Reid, manager of student accessibility services; and junior Omar Stoute. The panelists talked about their experiences as first-generation students at Ithaca College and how that has shaped who they are today.

The panel, which attracted an audience of about 30 attendees, took place in the Taughannock Falls room of the Campus Center. Five Ithaca College students attended, and the rest of the audience consisted of members of the college faculty and staff. The event was coordinated by the First Generation Working Group. Elizabeth Bleicher, one of the coordinators and associate professor in the English department and exploratory program director, who said she has a broad definition of what a first-generation college student is.

“It means your parents or guardians did not attend college, did not graduate, obtained certification or a degree from a night school or vocational school, or lived at home and commuted,” Bleicher said. “For me, it is very much about the alien landscape of a four-year, residential college experience.”

Roger Richardson, associate provost for diversity, inclusion and engagement and interim chief diversity officer, asked questions to start off the panel, and a Q&A followed. Several audience members were inspired to share their own stories of being first-generation students at the college and provide their own advice to students seeking guidance.

Stoute said that when he first got to college, he was under pressure as either the first to fail or the first to succeed. He said that at first, he was working mostly for his family, and finding intrinsic motivation helped him to find his passion.

The panelists said first-generation students deal with obstacles such as finding their own sense of identity, feelings of isolation, pressure to succeed and stepping away from community and family.

Bleicher said her experience as a first-generation student inspires her to reach out to current students as a mentor who helps to cultivate their strengths.

“What all first-generation students share is a desire to learn,” Bleicher said. “That can take the form of an unstoppable drive because they do not take college for granted.”

“We are role models for first-gen students, so we would want to be able to showcase ourselves so those first-gen students who are invisible to the campus community, hopefully they begin to see that there is a nurturing, supportive environment here to outreach to,” Richardson said.

Junior Nigel Nelson said although he isn’t a first-generation student, he was inspired by the motivation and success of the panelists.

“It’s amazing to me that they keep that success going with everything that could have possibly gone wrong,” Nelson said. “Sometimes when I get a bad grade I immediately want to stop, so hearing their stories is really interesting because they show that it’s possible to succeed.”

Bleicher said she hopes to use this momentum to create future programs based on what students say they need.

“So many have said, ‘If I had known they had been through what I was going through and been successful, it would have made me feel like what I was trying to do was so much more possible,’” Bleicher said.

This article was updated April 3 to reflect that Elizabeth Bleicher was not the sole coordinator of the event. The First Generation Working Group coordinated the event as a group.