Ithaca College part-time faculty to vote whether to unionize 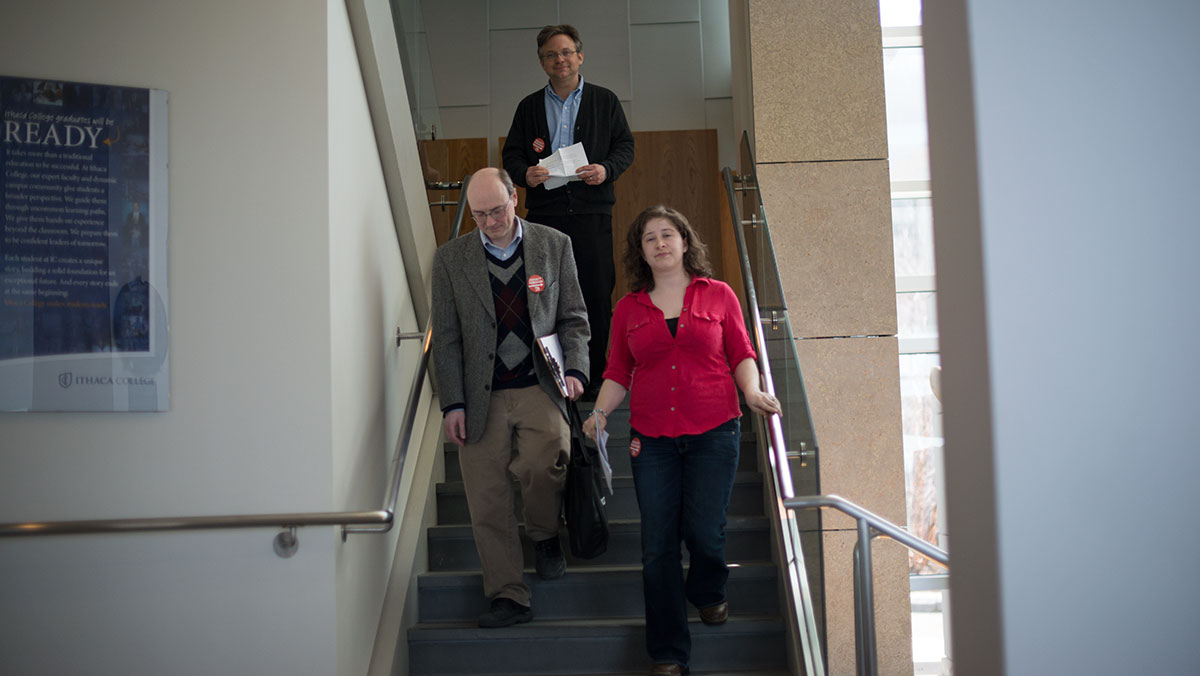 Ithaca College part-time faculty will vote in the coming weeks on whether to unionize, having filed their petition to unionize with the National Labor Relations Board on April 15.

Five part-time faculty members from the Ithaca College Adjunct Organizing Committee met with President Tom Rochon; Nancy Pringle, vice president and counsel for the division of human and legal resources; and Linda Petrosino, interim provost and vice president for educational affairs, in the Peggy Ryan Williams Center to ask the college administration to remain neutral and allow “for a free and fair election” as the faculty file to join Adjunct Action, a project of the Service Employees International Union, Local 200United. This is part of a recent movement toward unionization among the college’s part-time faculty, who began discussions last spring and began organizing in January.

Rachel Kaufman, a lecturer in the Department of Writing and one of the faculty members present in the meeting, said she thought the meeting went well and believes the college administration will remain neutral.

“It was a productive conversation,” Kaufman said. “The administration’s been very respectful and neutral so far, and we expect them to continue.”

“They don’t think the union is the best way to go,” he said.

After attempting to reach Rochon for comment, David Maley, senior associate director for media and community relations, said the college would not comment on the meeting between the organizing committee and administration.

“We also believe that these voters should have the opportunity to hear, and express, all viewpoints, and should also have access to relevant information before they exercise their right to vote,” the statement said. “If an election is conducted, we will support the provision of information to these employees so they can make an informed choice on this very important issue.”

Ten minutes prior to the Ithaca College Adjunct Organizing Committee’s meeting with the administrators, five student organizers with Students for Labor Action attempted to deliver a petition containing the signatures of 660 students and alumni to Rochon on the third floor of PRW.

The petition calls for “President Rochon and the Board of Trustees to stay neutral and respect the democratic right of our part-time faculty to organize a union without any administrative interference.”

After the students knocked on Rochon’s door, Master Patrol Officer Chris Teribury told them to wait downstairs. The students went to the first floor and then gave the petition to Burroughs to present to Rochon.

Sophomore Peter Zibinski, a member of Students for Labor Action, said the petition let the administration know of the students’ presence.

“The petition was our way of letting the president know that we’re watching, that we do care about our professors and how the administration reacts to that,” he said.

Students for Labor Action will be paying attention to the administration’s actions to make sure it stays neutral, sophomore Taylor Ford said.

“We’re going to be keeping a close eye on the way that the administration behaves in the coming weeks,” he said.

Joshua Kelly, another member of Students for Labor Action and a senator-at-large in the Student Government Association, said the petition could be the end of their efforts if the administration does not interfere with the unionization efforts.

“The petition was the first step and hopefully the last step as long as the administration stays neutral,” he said.

Two days prior, on April 13, the SGA passed a bill strongly recommending “the Ithaca College administration not interfere in any way with the ability of Ithaca College faculty and staff members to unionize.”

The legislation was sponsored by Kelly, who said the bill doesn’t put the SGA on one side or the other of the unionization debate, but instead simply requests the administration follow the National Relations Labor Act, which states it cannot interfere with a unionization attempt.

Kelly said he thought the bill was necessary because there have been instances at other colleges where administrations have used tactics to try to sway faculty or staff from unionizing.

The bill was passed by a narrow margin with eight senators voting to pass it, six voting against it and one abstaining. During the discussion phase of the bill, concerns were brought up that the bill would inhibit the administration from expressing any doubts or concerns about faculty and staff members unionizing.

However, Kelly said the legislation is simply a mechanism to try to ensure faculty and staff members remain free from any interference by the administration in the unionization process.

Next week, there will be a stipulated agreement between the administration and the organizing committee, which will set the election date for the unionization and decide which groups at the college are included in the unionization election.

The election date will be three to four weeks from April 15, the date the the college’s Adjunct Organizing Committee filed its petition with the NLRB. Part-time faculty members will then receive a mail-in ballot, which is due two weeks from the election date.

The organizing committee chose to file its petition to unionize April 15 because of the SEIU “Fight for 15” rallies nationwide, which called for a $15 minimum wage. In accordance with the “Fight for 15,” Adjunct Action is also calling for $15,000 per course in compensation to part-time faculty, according to the Adjunct Action website. Kaufman said the $15,000 figure is being used to organize the national campaign and is not directly related to the Ithaca College efforts.

Kaufman said the committee is confident part-time faculty members will elect to unionize.

“Over this past year, we’ve been talking to so many part-timers, and over 75 percent of the people that we’ve talked to have been supportive of the effort, so we’re confident,” she said.