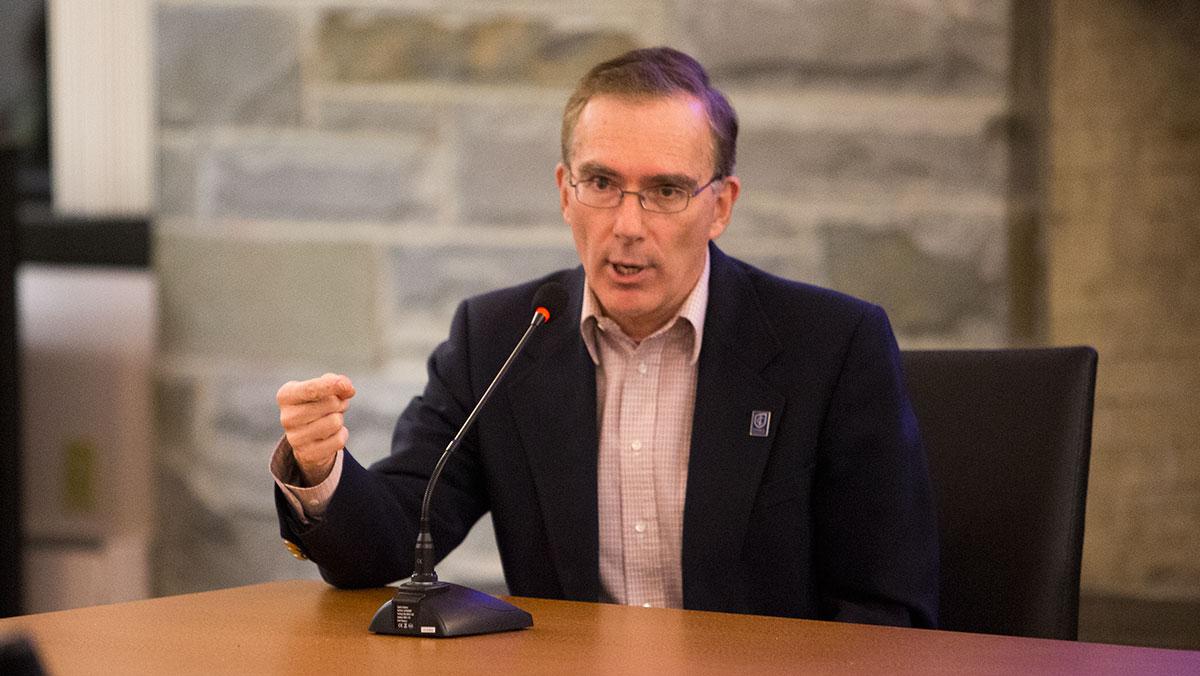 Though Ithaca College President Tom Rochon’s salary ranks ahead of presidents at similar colleges and universities, the average salary of faculty at the college is below the median in the college’s peer group, according to two recently released surveys by The Chronicle of Higher Education.

According to The Chronicle’s Executive Compensation at Private Colleges 2012 survey, which was based on information gathered from the IRS form 990, Rochon is the third-highest paid president in his peer group of 11 schools in total compensation, with $543,499 for the 2012 calendar year. The peer group included schools such as Bradley University, Providence College and Seattle University. In base pay, Rochon made more than all but one of the presidents in The Chronicle’s peer group with $357,215.

The salary of professors, associate professors and assistant professors, on the other hand, each ranked seventh out of the 10 schools in The Chronicle’s peer group who also participated in the 2013 American Association of University Professors survey. This survey takes into account salaries for the 2012/2013 school year, as there is no faculty data available for the 2012 calendar year since faculty are paid by the academic year. Harding University was in the Chronicle’s peer group for the executive compensation survey but did not submit data to the AAUP survey. Instructors at the college were paid the fifth most of the nine schools that submitted data in that category.

Nancy Pringle, vice president for human and legal resources, general counsel and secretary to the Ithaca College Board of Trustees, said Rochon’s salary is decided by the board of trustees based on a report by an outside consultant who compares many factors in deciding a list of comparable institutions, including size; operating budget; complexity of programs; and number of employees, faculty and staff.

“The board looked at that data and has historically benchmarked the president’s compensation package in the median of the subset,” Pringle said.

The Chronicle survey found that Rochon made more than 58 percent of the 500 presidents included in the survey. The survey also found that Rochon’s base pay was 3.7 times the average salary of full professors at the college, and it would take 11.7 students paying the full price of tuition to pay Rochon’s full compensation. The Chronicle calculated these numbers without including Rochon’s deferred compensation, which was $110,367. 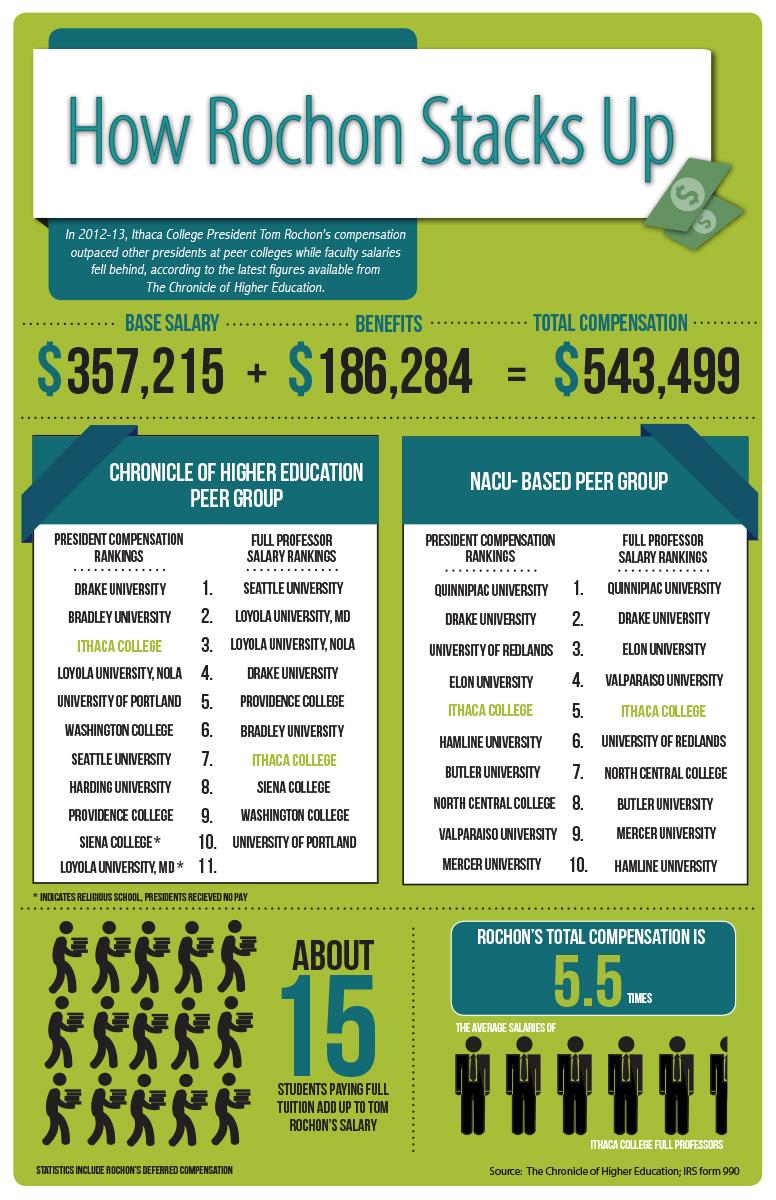 Infographic by Alison Teadore/ The Ithacan

“I’ve never heard of some of these institutions,” Pringle said. “They’re not on our comparator list, so how The Chronicle decided they were good comparators, I don’t have a clue.”

Pringle said it is particularly difficult to compare the college to religious institutions, which sometimes do not pay salaries to their presidents. In The Chronicle’s survey, six of the 10 presidents are catholic priests, three of whom receive no base pay.

“It’s hard to benchmark against religiously affiliated institutions because they compensate the presidents differently, depending on the missions of those institutions,” she said.

According to The Chronicle’s website, the similar institutions were determined using The Carnegie Classification of Institutions of Higher Education endowment value, total expenditure, percent of expenditures spent on instruction, admissions rate, religious affiliation, enrollment, percent of graduate students, percent of undergraduates over the age of 25 and median SAT score.

Peter Rothbart, professor of music theory, history and composition and chair of the Faculty Council, said the peer groups in surveys are often flawed.

“It’s a very imperfect scale,” he said. “The president has clearly stated that the goal is to keep salaries competitive for us. We’re all sort of hovering around the median salary for whatever the comparable group is.”

Rothbart added that he believed Rochon’s salary was around the median of presidents of comparable institutions.

Mark Coldren, associate vice president of human resources, said Ithaca College does not use the AAUP data in deciding faculty salaries. Coldren said the college instead uses data from the College and University Professional Association for Human Resources. As a member, the college submits human resources data to CUPA-HR. The college uses data collected by CUPA-HR, which contains salary data by faculty discipline, region and peer colleges, to set faculty salaries.

“We work with the deans and the provost to identify which schools they want to compare [with],” he said. “Those are the ones [for which] we go out and look at the data that we collect through CUPA-HR. Usually they are similar in size, usually private, and being in the northeast is important to us, but also we do look around the country as well.”

Rothbart said he believed faculty salaries should be increased, particularly part-time faculty, who have not received a raise since 2009.

“The point I continually object to is that, in general, the Ithaca College faculty salaries are around the median, which means that we’re just average, and I think the faculty here is very clearly well above average,” he said. “If you want a better school, you attract better faculty with higher salaries.”

Rochon falls under the median, however, when he is compared to members of the group of peer school groups created by The Ithacan last year to address concerns with The Chronicle group. This group is composed of institutions which were members of the New American Colleges and Universities, a group of small- to medium-sized colleges and universities, when Ithaca College was part of the group up until two years ago. Schools in this group include Quinnipiac University, Drake University, Hamline University and Elon University.