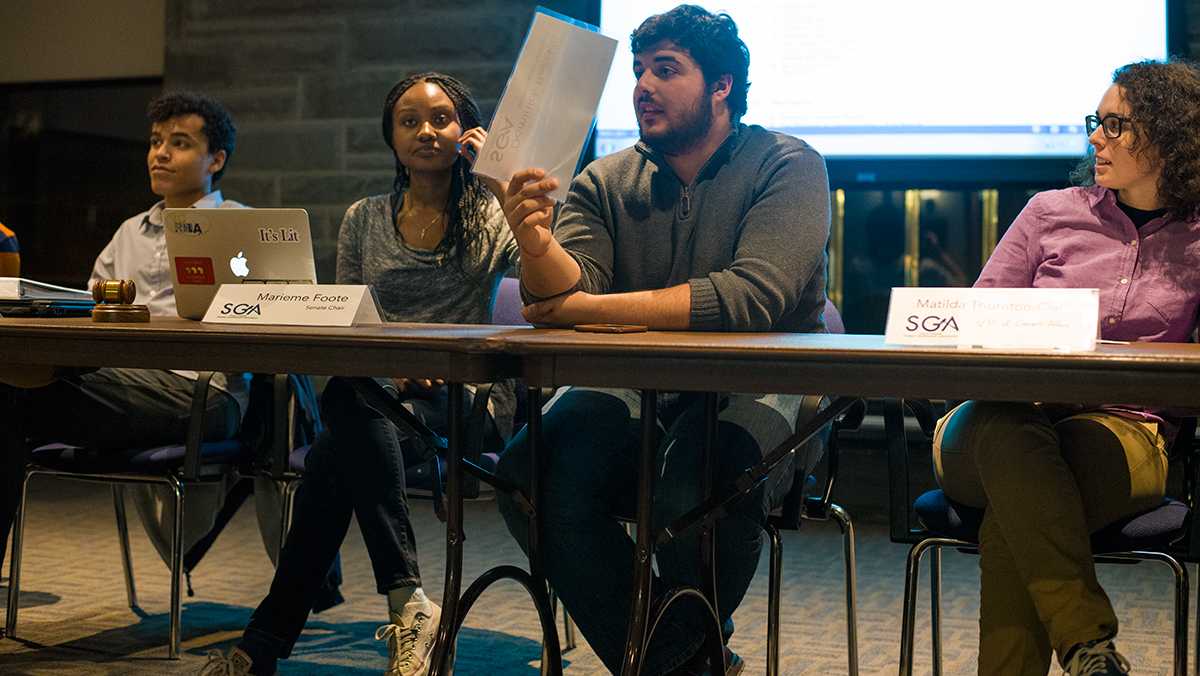 The Ithaca College Student Government Association has been unable to officially induct its new vice president of campus affairs due to low attendance at meetings and unfilled senate seats.

Following an executive request for the resignation of former vice president of campus affairs, Yena Seo, due to a re-evaluation of SGA priorities and the SGA constitution, the executive board appointed an interim vice president: senior Matilda Thornton-Clark.

According to the SGA constitution, a majority approval of the senate is required to accept the recommendation for the temporary or interim replacement, but senate approval is not needed to appoint the permanent position following the application process. Although the executive board has chosen Thornton-Clark as the permanent replacement, she never received a senate majority approval for her interim appointment.

SGA President Dominick Reckkio said he was not sure of the process of nominating Thornton-Clark to the vice president position.

“We did have an application process,” Reckkio said. “We as a board were confident in Matilda’s ability, so we chose her as the interim with the hopes of her being voted in as the full, and so there was some confusion. I honestly did not read the constitution close enough, and I didn’t know the entire process, so we are going to take a deeper look at that process as an e-board at our next meeting.”

Kyle Stewart, vice president of communication, said the source of the confusion in the constitution may have been caused by last year’s executive board review.

“I think the constitution does need revision,” Stewart said. “Every two years, they do an organizational review of the constitution. They did that last spring, where they updated our constitution, and in that process somehow there was miscommunication, mistyping that makes it unclear what they mean.”

Reckkio said a senate vote to accept the recommendation for a temporary replacement was supposed to take place Jan. 25, but because of low senate attendance, the vote has been pushed to Feb. 8.  Quorum, a two-thirds majority senate attendance needed to hold an official meeting, was met at both the Jan. 31 and Feb. 1 meetings.

Postponing the vote, Recckio said, was his decision because he wanted there to be more senate voice involved in the vote.

“To be transparent, the reason why we didn’t vote, in my mind — why I made that split-second decision to say, ‘No, we’ll wait’ — was I didn’t think we had enough senators,” Recckio said.

Stewart said due to the importance of the role, Thornton-Clarke has been granted all of the same authority as a permanent vice president of campus affairs.

Stewart said if the senate does not approve Thornton-Clark as the temporary vice president of campus affairs Feb. 8, the executive board will return to the application process of finding a new person for the seat, but Thornton-Clarke will remain interim.

The five newly inducted senators as of Feb. 1 are freshman Emily Honen as School of Humanities and Sciences senator; sophomores Theophilus Alexander as Class of 2018 senator, James Flinn as senator-at-large, Erez Zborowski as Roy H. Park School of Communications senator; and junior Timothy Conners as Class of 2017 senator.

Stewart said some seats are vacant due to many senators’ studying abroad this semester, while others — varsity sports, music school senator and the transfer student seat — have been historically hard to fill.

The SGA has been attempting to include more student representation and yield higher senate presence with recruitment initiatives. The SGA and the Residence Hall Association held their recruitment night Feb. 1 before the weekly meeting.

Stewart said he has launched a number of initiatives to raise awareness of the historically vacant senate seats, including posting announcements on student Facebook groups and OrgSync to target certain constituencies. He said he has reached out to music school professors, attended transfer student events and varsity sports games in order to garner attention for the vacant seats.