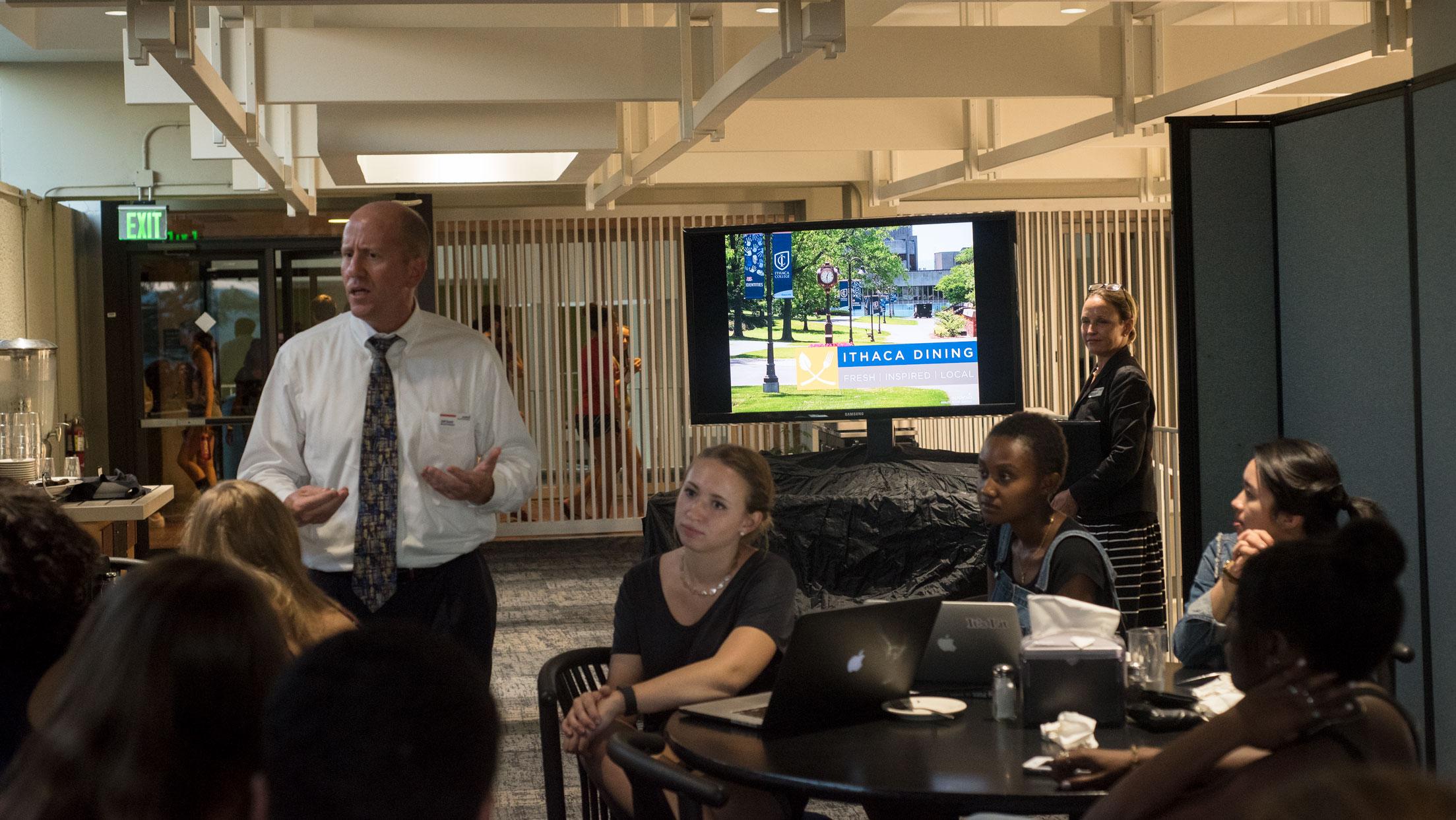 The Ithaca College Student Government Association held its first meeting of the 2016–17 academic year in the newly renovated Terrace Dining Hall, where it hosted a guest speaker from Sodexo and prepared for its upcoming elections.

Under a new executive board, the SGA opened its first meeting with a visit from Jeffrey Scott, general manager for Sodexo at the college, who highlighted some of the new additions and changes to the dining services and sought feedback from the SGA in a question-and-answer session.

Scott showcased some of the changes to dining options like the Hot Grab and Go, which dining services piloted in the spring semester and is continuing this year. It allows students to use a Tupperware container to take food out of the dining halls.

Scott also spoke about the Rapid Refill program, a sustainability-focused drink service where students can fill reusable plastic cups at new fountain drink stations that are open later than traditional stations, like Sandella’s Cafe. Scott said those stations are open until midnight.

What might not be on students’ radar, Scott said, is Sodexo’s mobile app, “Bite.” Developed by Sodexo, the application includes menus, scheduling information and calorie calculators for each campus dining hall. Scott said dining services will be placing a greater emphasis on marketing the app this year.

Scott was asked in the question-and-answer session, whether or not Campus Center Dining Hall will be refurbished like Terraces, to which he answered that he met twice with architects to discuss future plans to renovate the dining hall.

“We are working to do Campus Center next summer,” he said.

SGA President Marieme Foote questioned Scott about the incorporation of accessibility into the Terraces renovations. He said that his office has put in a request to add an elevator to Terraces, which currently only has a freight elevator.

“We’re working with facilities to get that project approved and funded,” he said.

Scott concluded the session by urging the SGA to forward feedback that it hears from students to his office to better their food and services.

The SGA then moved to vote on the Elections Committee — a committee that facilitates the SGA elections.

The purpose of the coming elections is to select students to serve as representatives for campus constituencies, including freshman through senior classes, international students, club sports and others. Applications are available on OrgSync and are due Sept. 2. Platform presentations will take place Sept. 6 in IC Square, and voting is scheduled for Sept. 8 and 9 on OrgSync, Senate Chair Carlie McClinsey said.

Additionally, Michele Lenhart, director of student leadership and involvement for the the Office of Student Engagement and Multicultural Affairs, will act as the adviser to the SGA, replacing Garrett Downing, who stepped down over the summer, McClinsey said.

Violence has no place in our community. As we navigate our way through these difficult times, we must actively love and continue to support one another in whatever ways we can.