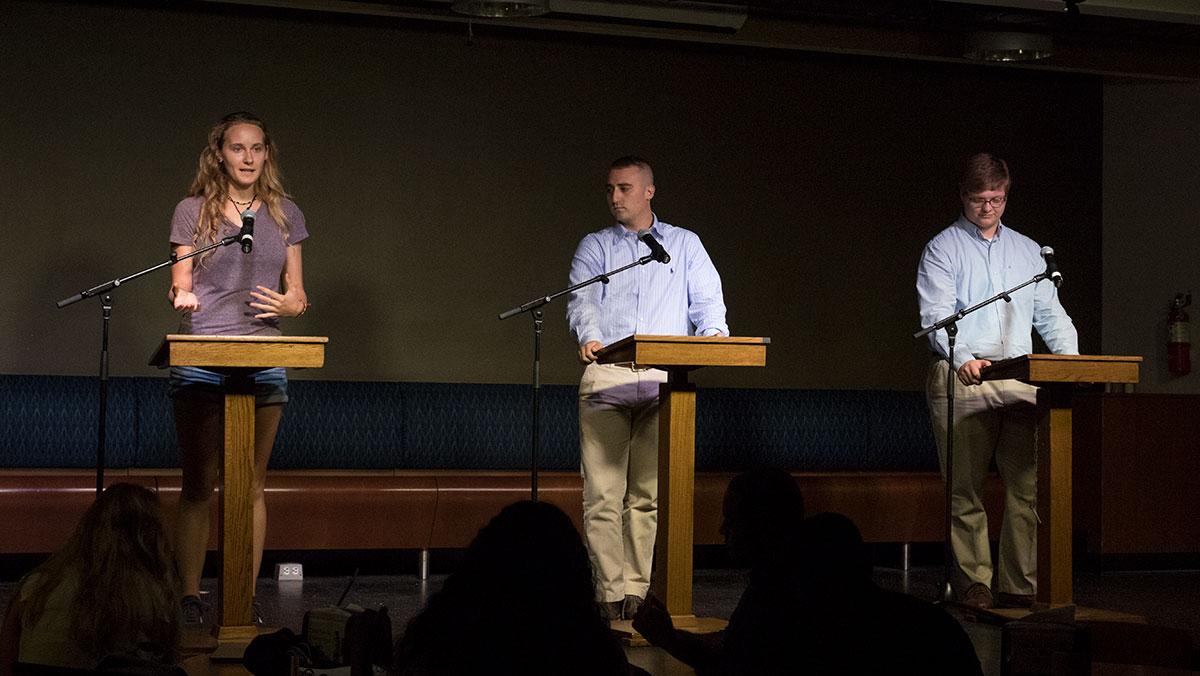 Twelve candidates gave their pitches to an audience of about 25 people at 7:30 p.m. Sept. 6 in IC Square, vying for the following open positions: international senator, transfer senator, senator at large, Class of 2020 senator and Class of 2018 senator.

Polls opened at midnight Sept. 8 and will close at 10 p.m. Sept. 9. Students can log in to OrgSync to vote.

Junior Isabella Grullon, running unopposed for international senator, spoke first about integrating the SGA into the community at large and, more specifically, international organizations on campus.

“I have always felt that international students and cultural clubs have been underrepresented within the community,” she said.

Slater advocated for transfer students to be given more information about groups around campus to make their transitions to the college easier.

Incumbent senator-at-large Carolina said he would implement events that would bring together students from different schools, like a movie night or community laser tag, to encourage the SGA to branch out into the community.

Koshgarian spoke more broadly, highlighting her experience volunteering for the Bernie Sanders campaign and saying that she would attempt to address environmental issues as part of her platform. Specifically, she spoke of implementing more water conservation tactics at the college.

Jallow held a moment of silence for Anthony Nazaire, the sophomore who was stabbed to death on the Cornell University campus Aug. 28. Then, after a brief introduction, she crumpled up the paper with her original speech on it and spoke about improving safety on campus by way of increased education on safety protocols.

Next, juniors Mara Erb, Conor Friend and James Flinn presented their platforms for the position of Class of 2018 senator.

Erb said she plans to address accessibility issues on campus by making sure roads are salted and elevators are functional. Additionally, she said she wants to increase student involvement with the presidential search and with the SGA. Lastly, she said she would try to reduce food waste by donating uneaten food.

Friend listed his experiences, which include being vice president of the Class Council for the Class of 2018, interning over the summer for Governor Charlie Baker of Massachusetts and Rep. Claire Cronin, and being the head delegate for Model United Nations Club at the college. As part of his platform, he emphasized increasing the SGA’s presence in the community. He also proposed working with the Office of Judicial Affairs to rescind the new alcohol policy.

Flinn, former senator at large, said he would work on bringing the community closer together by hosting and joining events around campus. Additionally, he proposed creating a committee with the same goal as the Tobacco Free IC bill that was passed last semester — to ban tobacco on campus.

Picca said she was president of her high school class for all four years and was the first female class president the school had had in more than 20 years. She advocated for adding more tables outside, restructuring the registration process at freshman orientation and enacting a day of sorrow for those who have faced a tragedy such as the death of Nazaire.

Horbacewicz said she would find opportunities to inform the freshman class about the community outside the college. She also said she would create a website for clubs to communicate with one another and for students to find clubs in one place.

Senate Chair Carlie McClinsey, who facilitated the event, read Mughal’s speech, as Mughal was not able to attend. Mughal wrote that she had been involved in student government in high school, is an MLK Scholar and a member of the cheerleading team at the college. She said she would address diversity issues by advocating for education about the different ethnicities, sexualities and backgrounds that make up the campus community. She said she would organize events that create conversations and a feeling of unity so the campus can share the “pride we feel as Bombers.”

“As an MLK Scholar and person of color on a predominantly white campus, I understand the struggles one may face, and it is my goal to make everyone feel safe and united no matter how they identify,” Mughal wrote.

The Ithaca College Student Government Association released the results of the senatorial elections at noon Sept. 26.