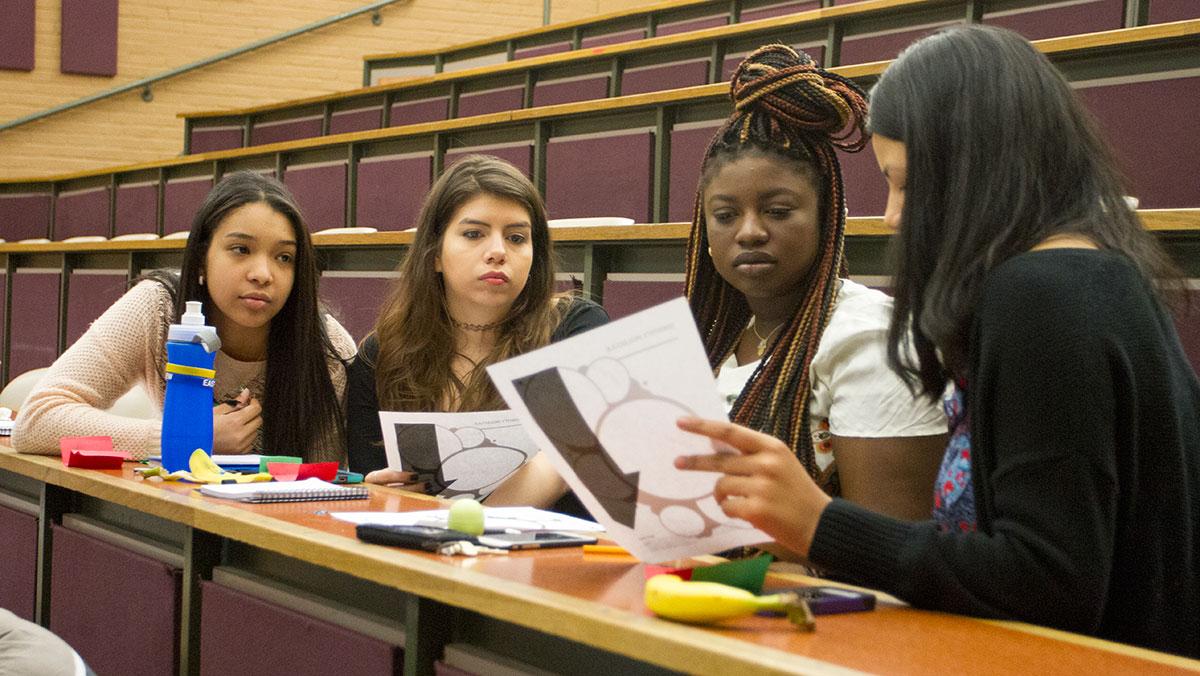 About 30 Ithaca College students came together to discuss ways to enhance the college experience for students of color April 18 at IC’s first Diversity Town Hall Meeting.

The event was hosted by Cornell Woodson ’09, associate director for diversity and inclusion at the Cornell University School of Industrial Labor Relations; and seniors Sierra Council; Candace King; and Crystal Kayiza, president of the Student Government Association.

The point of the discussion was to help bridge the gap in communication between students of color and the administration and to come up with solutions that work for both sides, Council said.

“We have been talking about diversity ever since I came to IC, whether it’s within communities of color or from the administration claiming to address the need for diversity on campus,” Council said.

Freshman Luis Torres said he attended the meeting because diversity is an important issue on campus, and there is not much dialogue about it outside of the minority groups.

“[My hope is that] we will be able to actually accomplish the goals that we set and not forget about it when we leave this room. [My fear is that] the conversations we start will not be taken seriously,” Torres said.

On the worksheet students were asked to fill in the five bubbles with their top-five most salient identities.

Woodson’s expectations were that people would share their authentic experiences and that people would be validated, he said in an email. His next expectation was that people would identify key spaces on campus where they felt unsafe in their identities as people of color; members of the lesbian, gay, bisexual and transgender community; women; or other marginalized groups. Lastly, he said he hoped the students would develop tangible initiatives that they felt needed to be implemented in order to make the campus more inclusive.

“As an administrator myself and even as a student leader at IC, I often feel that students have no problem voicing their feelings,” Woodson said in an email. “However, they don’t always offer up an answer to how to make IC more inclusive. I think offering up tangible ideas to administration makes it harder to place these issues on the back burner.”

One way to make the campus more inclusive would be to establish more diversity requirements, freshman Brittany Gardner said.

She said another way would be to develop more collaboration between the African Latino Asian Native American community and the administration.

“The administration should be more involved in ALANA events and have more representation of minorities in administration,” Gardner said.

Woodson said he has been an active alumnus since he graduated, and he has stayed in touch with students of color. In speaking with them, he has learned their experiences on campus are not only less than perfect, but the administration has not been very responsive to their experiences, he said.

Sophomore Cecilia Morales said the campus is diverse for some, but college diversity initiatives are not implemented in a large-scale way.

“Since coming to IC, I’ve noticed that the school does the bare minimum when it comes to diversity,” Morales said. “Sure we have ALANA, gender studies programs and [Center for the Study of Culture, Race, and Ethnicity], but those communities and programs are so small. Most of what is considered to be diversity is brushed off as either an ICC requirement or just something to put on the school’s website to say that we’re ‘diverse.’”

Morales said the administration is responsible for teaching students about diversity issues they may not be aware of.

“Most of us don’t want to break out of our comfort zone, but at the same time I feel like it’s the school’s duty to educate those who aren’t accustomed to different things,” Morales said.

In the next activity they discussed the spaces on campus where they felt unsafe or where their identities were threatened.

Junior Lashanda Anakwah said she feels unsafe in the classroom.

“I take a lot of politics classes because it’s my minor, and whenever a race issue comes up it’s very obvious that people feel uncomfortable because I am in the classroom,” Anakwah said.

Since some administrative leaders were present from Career Services and the Office of Alumni Relations, freshman Ngan Tran said she wants to look out to see if some of the ideas discussed at the meeting get implemented. She also said she hopes to see more students joining in on the conversation about diversity.

“From this town meeting, I understand that student activism is very important even though it is something difficult to sustain,” Tran said. “I hope that more students will join the town meeting and express their experience at IC so far.”