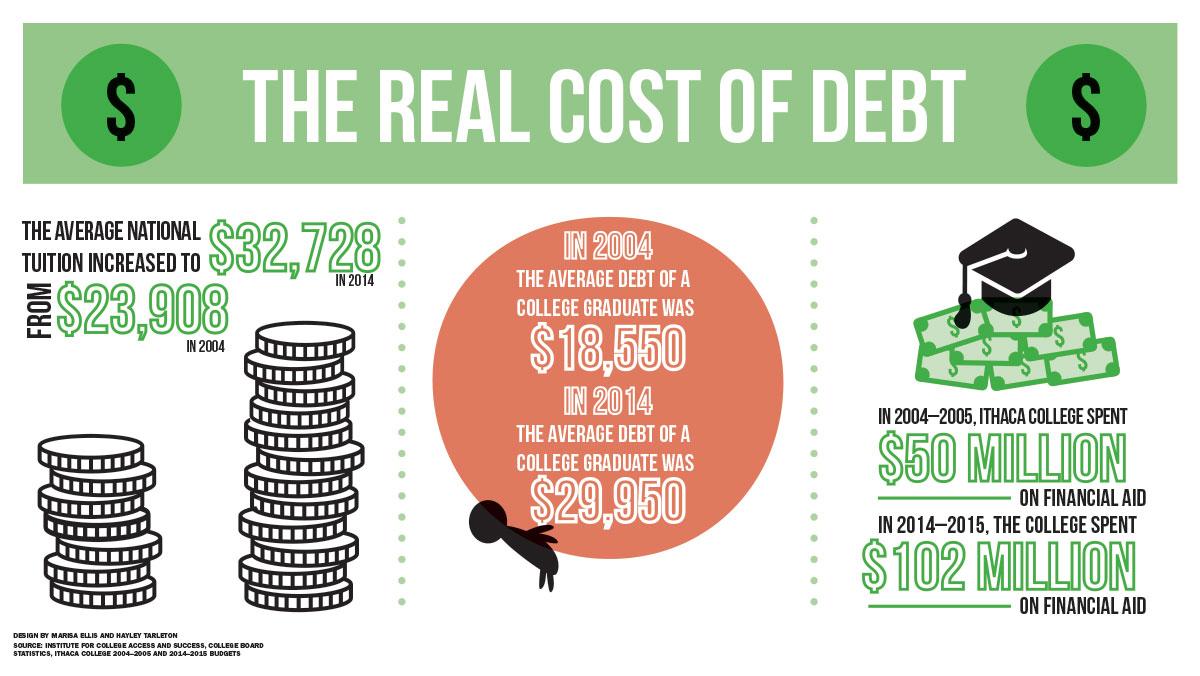 Marisa Ellis and Hayley Tarleton/The Ithacan
Ithaca College students have been found to meet the national average for student debt, which is around $30,000.
By Sam Haut — Staff Writer
Published: November 11, 2016

Student debt in the United States grew to another all-time high in 2015, and Ithaca College students are not exempt from the issue.

Of the seniors who graduated in the 2015-16 academic year from both public and private colleges in the United States, 68 percent left with an average of $30,100 in student debt, according to The Institute for College Access and Success. The average amount of debt with which students at Ithaca College graduated was $30,000 for the last academic year, said Mark Kantrowitz, an expert on student financial aid.

Kantrowitz’s estimate comes from the College Scorecard, a site made by the Department of Education for students and parents to compare college financial data. The college estimates that the average total federal loan debt for the Class of 2012 was $23,849, but this doesn’t include private loans, which Kantrowitz accounts for.

Because of these increasing costs, the amount of aid that students must get in order to pay for college has also increased. In 1991, about 40 percent of first-year students received financial aid from the college, and in 2013, that number was at 90 percent, according to the 2014–15 budget. In 2004, the average debt of a college graduate was $18,550, and in 2014, that number was $28,950, according to the Institute for College Access and Success. In 2003, the average debt of all students in the U.S. was around $300 billion; that number is currently around $1.2 trillion.

And student debt has been rising, Kantrowitz said, because the government has not been giving enough financial support to students.

“Student loan debt at graduation increases because of a failure of government grants to keep pace with increases in college cost on a per-student basis,” Kantrowitz said.

He said student debt is rising faster than the government is increasing its funding to counteract it. In the 1970s, the maximum Pell Grant that could be given to students was around $1,400, and this year, the maximum is $5,815. Over the same period, the average tuition and fees for all colleges went from $10,415 in the 1969–70 school year to $28,659 this year, according to the National Center for Education Statistics and College Board.

This is true for someone like sophomore Lauren Kleiman, who said she pays no money for college because she was given enough money in scholarships and federal grants, though more of that money comes from the college. She said she understands that while she is not affected by student debt, others are.

“It’s ridiculous that students have to pay so much in student debt,” Kleiman said “It’s definitely a national issue that we need to pay more attention to.”

Junior Virginia Maddock said she will owe around $150,000 by the time she graduates. She said she thinks the government should help students decrease their student debt through increasing funding for grants and scholarships.

“I would like college to be free, or at least less,” Maddock said. “I mean, there is definitely the resources to provide the same quality of education for significantly less money.”

College can be a steep investment for many students and their families.