Courtesy of Steve Desmond
A preview of the HomerConnect update, which Steve Desmond, an enterprise applications developer at the college, said still might change before it is released on April 10.
By Max Denning — Online News Editor
Published: April 6, 2015

Ithaca College will be releasing “HomerConnect 2.0” later this week, an update to the Ithaca College student and faculty database, which students also use to register for classes.

Steve Desmond, an enterprise applications developer at the college, said the update should be live April 10, but could be available as soon as April 9.  Desmond said it is important for students to become familiar with the update before they begin registering for classes April 20.

The team that worked on the update met with about a dozen faculty, staff and students, including freshman Aaron Zufall, who created the Google Chrome extension “Less Terrible HomerConnect,” April 6 to receive feedback on the update.

In November, members of Information Technology Services met with Zufall to talk about HomerConnect. Desmond said meeting with Zufall and seeing his creation motivated ITS to create HomerConnect 2.0.

“Honestly, that was probably a big driver for why this happened,” Desmond said. “We’ve always known that it’s an issue. I think it was really that that said ‘All right, guys, this is a really big issue, you need to do this now.’”

HomerConnect 2.0 will not include a change in functionality but a change in design and organization.

The new site will not include any new functions but will bring different parts of the website to the main menu and allow students to use the back button on their browser. 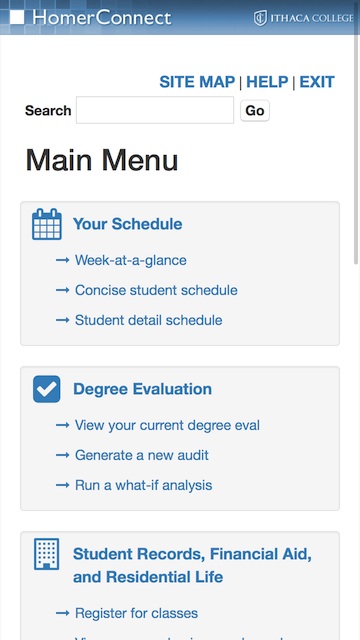 Courtesy of Steve Desmond A screenshot of how HomerConnect 2.0 will look on a mobile device.

“Things like course registration [and] Res Life housing selection are going to be front and center because that’s what people want to get to fastest,” Desmond said.

HomerConnect 2.0 will also be mobile-friendly, with the website adapting to different screen sizes, such as those on tablets and smartphones.

Desmond said ITS is unable to make major changes to the functionality of HomerConnect because its software is designed by Ellucian, a developer of higher-education technology.

“Because we’re using a different company’s product, we don’t have control over certain things,” Desmond said. “We can make it look better from the front, but there’s certain things we can’t change.”

The new design includes the use of Bootstrap, a free and open-source Web framework which was originally designed by the Twitter developers, who made it in an open-source developer tool in August 2011. It is now used by 4,848,953 websites, or 1.6 percent of the entire Internet, according to builtwith.com.

“It gives people a familiar interface, as people are used to seeing Bootstrap-like sites,” Desmond said.

Desmond said ITS will likely be able to make other changes to the website in the future because of this first update.

“Now we can make more lightweight changes, though I doubt we would do it more than once a semester as not to confuse people,” he said.