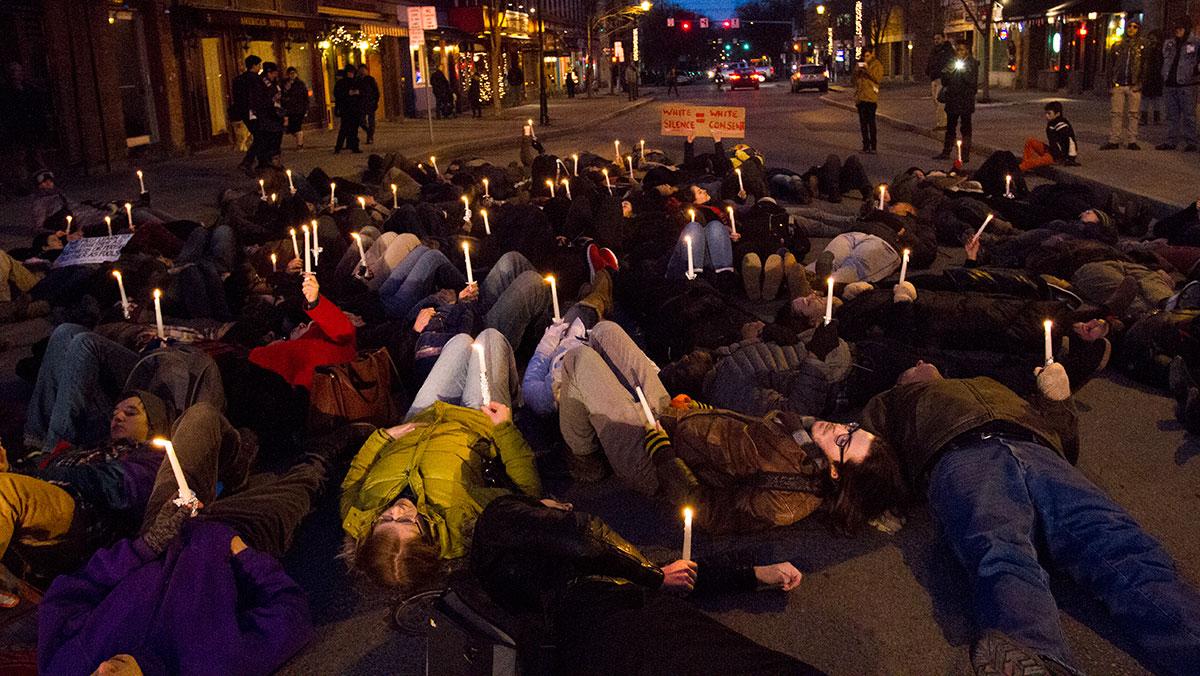 “Whose streets? Our streets! Whose streets? Our streets! No justice, no peace!” the crowd cried, moving from the sidewalk in front of the boarded up Simeon’s building on The Commons to the middle of Aurora Street. Traffic was halted as the protesters proceeded to partake in a ‘die-in,’ where they each lied in the ground to symbolize dead bodies in the street, while holding lit candles.

As the sun set around 5 p.m. on Dec. 4 in Ithaca, about 100 people came together in solidarity to stand against racial injustice. Ignited by the recent grand jury decision to not indict New York Police Department Officer Daniel Pantaleo in regard to the chokehold-related death of 43-year-old African-American Eric Garner, people across the United States held protests, vigils and marches against police brutality. The event in Ithaca, under the This Stops Today movement, was mirrored by about 80 other protests around the country.

Ithaca College student Evan Scott, one of the organizers of the event, walked around the group handing out candles to those who hadn’t brought their own. Scott said the event was organized the night before around 11 p.m. Tensions over racial injustice had already been mounting at the college since an on-campus protest Dec. 1, only to increase when the grand jury decision not to indict Pantaleo was announced Dec. 3.

Officers from the Ithaca Police Department stood watching the protesters from afar, and placed traffic cones in front of them to stop cars from interfering.

From the ground, the protesters continued with more call-and-response chants that have become identified with recent solidarity movements. “Hands up, don’t shoot” rang out, and lit, white candles were lifted into the air along with homemade signs, reading things like “Indict America” and “White Silence = White Consent.”

After the die-in, the protesters moved down Aurora Street, turned onto Seneca Street and headed down Cayuga Street to end in front of the Ithaca City Hall building on 108 E. Green St. As they walked, they chanted “black lives matter” into the night. Garen Whitmore, another organizer of the event, carried a poster that said “police armed to the teeth cannot hope to keep the peace.” Adorned with red handprints, it had newspaper article clippings from other instances of police brutality.

The marchers dispersed after an hour and a half once they reached City Hall. Ithaca College senior Dubian Ade took a moment to thank people for attending, and he urged them to continue to show up and support such events. When asked about the turnout and recent demonstrations also being held at Ithaca College, he said he thought the increased activism was due in part to people missing out on a protest that happened over the college’s Thanksgiving break against the lack of indictment for Ferguson Police Department Officer Darren Wilson in the case of the Michael Brown shooting.

”People felt like they were isolated from that and they were excluded from that, which is one of the reasons why so much is going on right now I think,” Ade said. “Peeps know what time it is.”