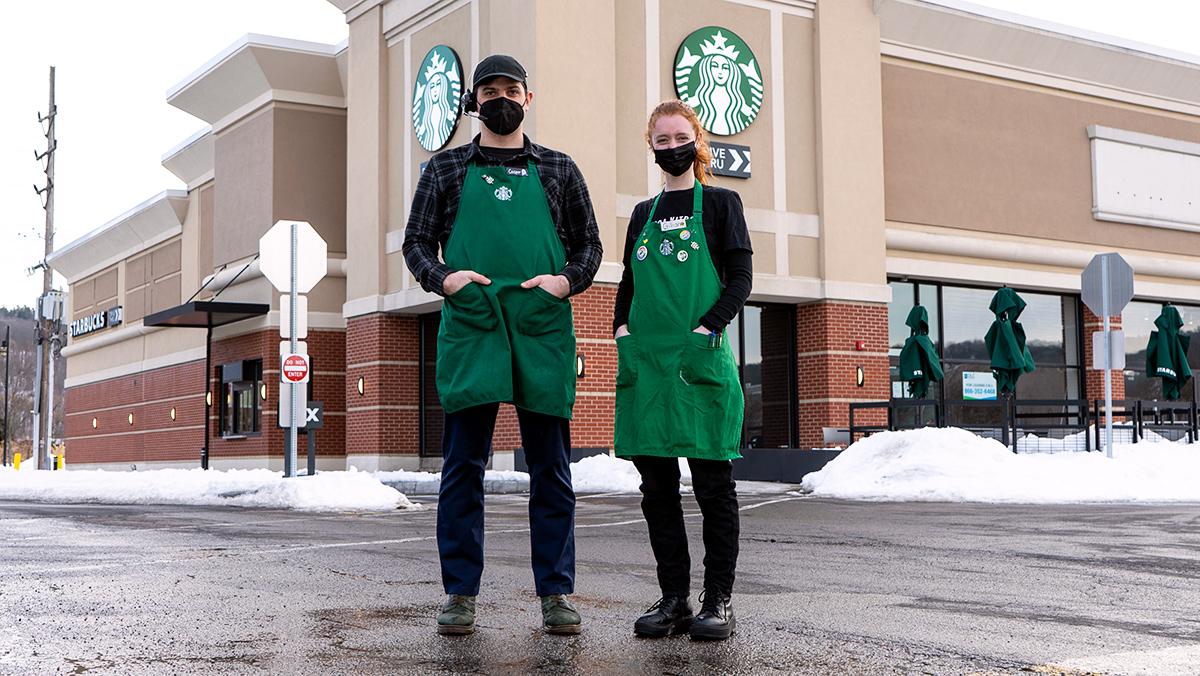 Kevin Yu/The Ithacan
From left, Caspar Ward York and junior Gillian Rossbach are two workers at the Meadow Street Starbucks in Ithaca who have signed a petition to unionize their store.
By Elijah de Castro — News Editor
Published: February 16, 2022

Joining in solidarity with other workers defining the 21st century labor movement, Ithaca College junior Gillian Rossbach and sophomore Alyssa Salerno, who are Starbucks employees, have signed a petition for a vote to form a labor union at Ithaca’s Meadow Street Starbucks location.

So far, 26 workers across Ithaca’s three Starbucks locations — Meadow Street, College Avenue and The Commons — have signed the petition. Roughly 65% of each location has signed the petition, which is above the 30% requirement needed to get a vote, according to the Ithaca Times. The workers were inspired when a Starbucks in Buffalo, New York, voted 19–8 in favor of creating the only unionized store out of the over 8,000 Starbucks locations in America. These union efforts are taking place during a mid-pandemic American labor movement. Since 2021, unionization efforts and labor strikes have exploded throughout the American workforce, specifically at large companies like Nabisco, Kellogg’s and John Deere. Concurrently, The Great Resignation has caused the quitting of nearly 70 million jobs and as a result has brought labor-related issues — the minimum wage, benefits and job quality — to national attention.

Rossbach has worked at multiple Starbucks branches in both Ithaca and her home state of Maryland since 2017. Recently, Rossbach has been working at the Starbucks on Meadow Street, which opened in January 2022. Rossbach said that for a few months, talks of forming a union began among workers at the Collegetown Starbucks location on College Avenue. Workers between Ithaca’s three Starbucks branches had been communicating with one another about their ideas for unionizing. However, fear of getting fired made them hesitant, because Starbucks has been found firing workers attempting to unionize.

A spokesperson for Starbucks’ media relations department said that while the company respects the unionization process, it believes direct discussions between management and workers is better for the company.

“We continue to believe a union is not necessary at Starbucks,” the spokesperson said. “We believe direct communication between our partners has made us the company we are today.”

However, Rossbach said one of the biggest reasons she signed the petition for a vote to unionize was because she believes Starbucks fails to meaningfully communicate with its workers. It was only when Rossbach and her coworkers began unionizing that Starbucks began to listen to them and give them resources to deal with in-store issues like understaffing, poor sanitation and gruelingly long work schedules.

“After we got the petition signed, corporate came swarming in the next day almost,” Rossbach said. “They are helpful. … But the help we are getting is because we are doing the unionizing efforts. They’ll claim it’s not the reason.”

Like other corporations, Starbucks has met unionizing efforts with worker intimidation and a firehose of cash being spent on anti-union propaganda and corporate lawyers. As the movement to unionize gets out of the company’s control, it has stepped up its union-busting efforts. At a store in Memphis, Tennessee, workers filed a federal complaint, saying Starbucks illegally fired seven pro-union employees.

Despite this, the National Labor Relations Board (NLRB) — which is in charge of facilitating union elections — is strengthening protections for workers trying to unionize. A spokesperson for the NLRB said the NLRB is beginning an initiative to stop coercive conduct by employers during organizing campaigns. The spokesperson said the NLRB has received the union election petitions for all three of Ithaca’s Starbucks branches and will hold a hearing for those cases Feb. 22.

Rossbach said that since she and her coworkers have signed the petition for the union, members of Starbucks management have allegedly been stealing the personal property of the workers who work at the Starbucks location on The Commons.

“In front of The Commons is the Hotel [Hilton Garden Inn] property,” Rossbach said. “The hotel allowed us to put our union signs in front of the store because it’s not Starbucks’ property. He [a member of the company’s management] took them down and took them with him. That would be the same as him taking someone’s purse.”

Salerno has worked at the Starbucks on The Commons since December 2019. Salerno said Starbucks has kept its stores open and asked her to work multiple times when it was not safe, like during the worst of the COVID-19 pandemic or periods of extreme weather.

After recent changes, Starbucks’ minimum wage will become $15 an hour, which is slightly higher than New York’s minimum wage of $13.20 an hour and more than double the federal minimum wage of $7.25 an hour. However, the company has engaged in wage theft, which is when an employer illegally holds money that it owes its workers. Additionally, according to a report by ZipRecruiter, the company’s lowest-paid American baristas have an annual salary of $18,231, which is within federal poverty lines. The annual compensation of the company’s CEO, Kevin Johnson, was $19.2 million in 2021. The company’s founder, Howard Shultz is worth $4.3 billion.

Rossbach said the pay that Starbucks workers receive is not equivalent to the hours that they work and the company does not have adequate seniority pay.

“I have coworkers that have been there for years and years and years, and they make a little bit more than I do,” Rossbach said. “One of my coworkers has been working as a shift supervisor for upward of six years and has opened a bunch of different stores and he makes $1 [per hour] more than I do, and I just got my shift position. … We’re unionizing because they don’t give seniority pay. There are benefits and they look really good on paper, but they make you look at them with rose-colored glasses. It’s just the basics … it’s not very good.”

Senior Kellie Swensen is one of the leaders of IC Students for Labor Action, a group on campus that advocates for labor rights. Swensen said the unionizing effort is long overdue and a step forward for local workers.

“We are thrilled that this is happening,” Swensen said. “A lot of us have been following Starbucks Workers United for a bit of time now. Just watching that whole journey and where it has come is really great to see. We want to see those efforts on a larger scale, but it’s also great to see it happening locally right here in our community.”

Salerno said that working at Starbucks is tiring and takes large amounts of energy and the stores are frequently understaffed and as a result, Salerno and her coworkers have had to take on more tasks than one person can handle.

“I always say that being a barista at Starbucks is like having one and a half jobs,” Salerno said. “You have a role and then you have a secondary role … and you’re only one person. When you take into account things like bathroom breaks and drinking water — that just doesn’t happen at Starbucks. I don’t drink water. We’re not allowed to have it on the floor with us.”

Rossbach said in addition to improving communication, forming a union would help her and her coworkers combat harassment from customers and coworkers. Starbucks, which has a workforce of 71% women and 48% people of color, has a history of failing to take meaningful action against sexual harassment and racism that its workers have faced. Rossbach said that when she worked at Starbucks’ College Avenue location, the branch’s management would not ban a regular customer that frequently catcalled workers. Rossbach said part of the union contract that her and the co-signees of the petition are fighting for would grant them the ability to ban customers that make them feel unsafe or uncomfortable.

Hope Liepe is a barista at the Meadow Street Starbucks who is on the Ithaca Starbucks’ union organization committee and is in charge of filing the petitions with the National Labor Relations Board. Liepe said workers at the three stores in Ithaca started collecting signatures after seeing the success in Buffalo. Now, the workers have a union representative and are using group chats to communicate about union efforts. Liepe said one of the benefits of unionizing in Ithaca is that the town has strong support for labor unions.

“That really helped us as employees, because when we introduced it to other people who work there and not just the people on the organizing committee, they received that really well,” Liepe said. “We’ve already seen that with people coming to their stores, and just telling us how much they support us. I’ve had multiple customers tell us that they’ve never been to Starbucks, but came by just to show their solidarity.”