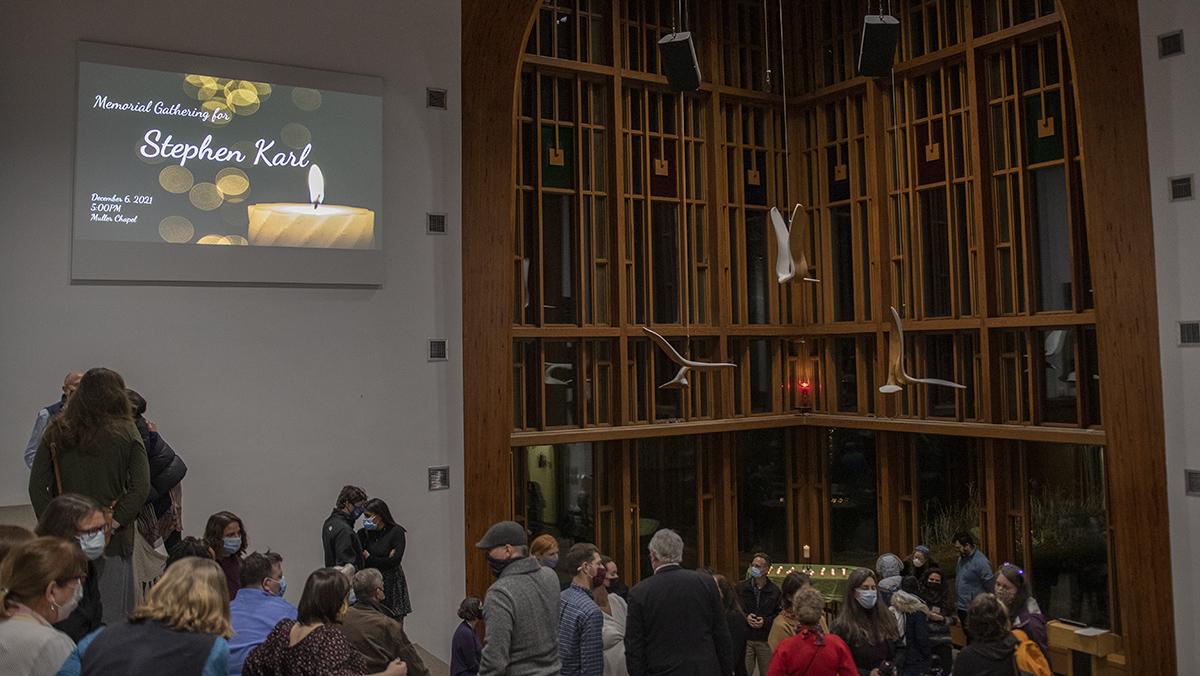 Ash Bailot/The Ithacan
Approximately 90 members of the college community attended the memorial, which was held both in person at the Muller Chapel and virtually via Zoom.
By Alexis Manore — Editor in Chief
Published: December 8, 2021

On Dec. 6, members of the Ithaca College community gathered to honor the life and share memories of Stephen Karl, mental health counselor for the Center for Counseling and Psychological Services (CAPS) following his unexpected death.

Approximately 90 members of the college community attended the memorial, which was held both in person at the Muller Chapel and virtually via Zoom. Karl served as a counselor for many students since he began working at the college in 2017. During his 20 years of clinical experience, Karl focused his work on children and adolescents struggling with anxiety, depression and attention deficit hyperactivity disorder. He also had extensive experience in treating addiction and the impacts that it has on families and significant others.

Dean of Students Bonnie Prunty announced that Karl had died of natural causes Dec. 3 in a Dec. 4 email to the campus community.

“Along with the entire IC community, we offer our sincerest condolences to Stephen’s family, friends, colleagues, and all who are affected by his passing,” Prunty said in the announcement. “We ask that you please keep him and his loved ones in your thoughts and prayers.”

Lauren Goldberg, interim director for the Office of Religious and Spiritual Life and executive director for Hillel at Ithaca College, began the service by reading a poem called “Praise the Rain” by Joy Harjo.

Cantor Abbe Lyons then sang “Way Over Yonder” by Carole King, in honor of Karl’s love for spending time outdoors.

Goldberg said Hierald Osorto, former executive director for Student Equity and Belonging and Religious and Spiritual Life, used to say that Muller Chapel held the heartbeat for the college community. She said that night, the chapel held the community’s heartache and heartbreak.

“It was actually gatherings like this where I met Stephen when he was serving as a CAPS counselor,” Goldberg said. “Sitting in the back, being a quiet response for folks who needed a little extra support.”

Interim President La Jerne Cornish offered her condolences to Karl’s family, colleagues and the students he worked with. She thanked Karl for all of the work he did to help improve students’ lives.

“I spoke with several students today who told me what a difference he made in their lives,” Cornish said. “Whenever they spoke to him, he was non-judgmental. He listened with an open heart, and he always tried to provide them with tips to use to help themselves in between their times together.”

Brian Petersen, director of the Center for Counseling, Health and Wellness, said that during his time working with Karl, they spoke about what they were going to do when the COVID-19 pandemic was over, like getting a beer together. He said he has learned to not pass up opportunities that he may not have again.

“For the students here tonight, I think you know what his attention felt like,” Petersen said. “He was able to take you into his being and in a way, love you for being there, but he also could make you feel loved. I do think that therapy is a form of love. Therapy is a way of connecting with another person, and saying through your work that ‘I care about you. I see you, and you’re important.’ I think … his students felt seen. They felt important. … at the end of the day, that’s the point.”

Liv Honeck, psychiatric nurse practitioner at the Center for Counseling, Health and Wellness, spoke about how Karl helped her feel welcome when she first began working at the college, which was in the middle of the pandemic. She said they became very close friends and would often drink tea together in her office.

“The world will never know another like him,” Honeck said. “Stephen, when it’s my time to join you in the next lifetime, I hope you leave the door cracked open and have a teakettle on the stove waiting to be poured.”

Lis Tomlin, licensed mental health counselor for CAPS spoke about the way that Karl refused to ignore even the smallest bit of progress, and instead celebrated the small steps like they were the biggest.

“He spoke about all people without guile, and without ego, and this genuine, authentic curiosity and awe,” Tomlin said. “This is rare, I don’t know many people like that. And it’s something I aspire to be and to be and to do because of him and because it was so good to be on the opposite side of that.”

Luca Maurer, director for the Center for LGBT Education, Outreach and Services and interim executive director for Student Equity and Belonging, said Karl was quick to share words of encouragement and resources for colleagues to help support a student.

A number of students spoke about their experiences working with Karl. Many of those students said Karl impacted them deeply and how he helped them through their mental health journeys in unexplainable ways. At the end of every appointment, Karl would tell his students that he was honored to know them.

A group of faculty and staff members who were a part of a swimming group spoke about Karl. Jonathan Ablard, professor in the Department of History, said Karl was the kind of swimmer who belonged in the water and that the members of the group took great joy in the time they spent with him.

“On the Friday that he died, I emailed him to get a recommendation for a student in crisis,” Ablard said. “He wrote back immediately. I often spoke with him about students in crisis, and he always had a smart and empathetic response.”

Multiple people spoke about Karl’s passion for swimming, sailing and spending time outdoors, and how they have been lifelong passions for him.

Owen Karl, Stephen’s son, said he and his family appreciated learning about parts of Stephen’s life that they were not as familiar with.

“He was tremendously proud that he worked here,” Owen said. “He kept the job offer letter up on the fridge for months and months. … Obviously I don’t know his students and clients, but I know you all really meant a lot to him. … I hope that you can all continue to get the care that you need.”

Support services for students are always available through CAPS by calling 607-274-3177 and following the prompts to reach the after-hours, on-call counselor. Students in distress needing immediate assistance should contact the Office of Public Safety at 607-274-3333 or the on-duty residential life staff. Employees can access the counseling services of the Employee Assistance Program by calling 1-800-327-2255. The Office of Religious and Spiritual Life also has a website dedicated to grief resources, and can also provide support by contacting Goldberg at lgoldberg2@ithaca.edu.

Editor’s Note: Karl served as a counselor for multiple members of the editorial board, including Editor-in-Chief Alexis Manore.