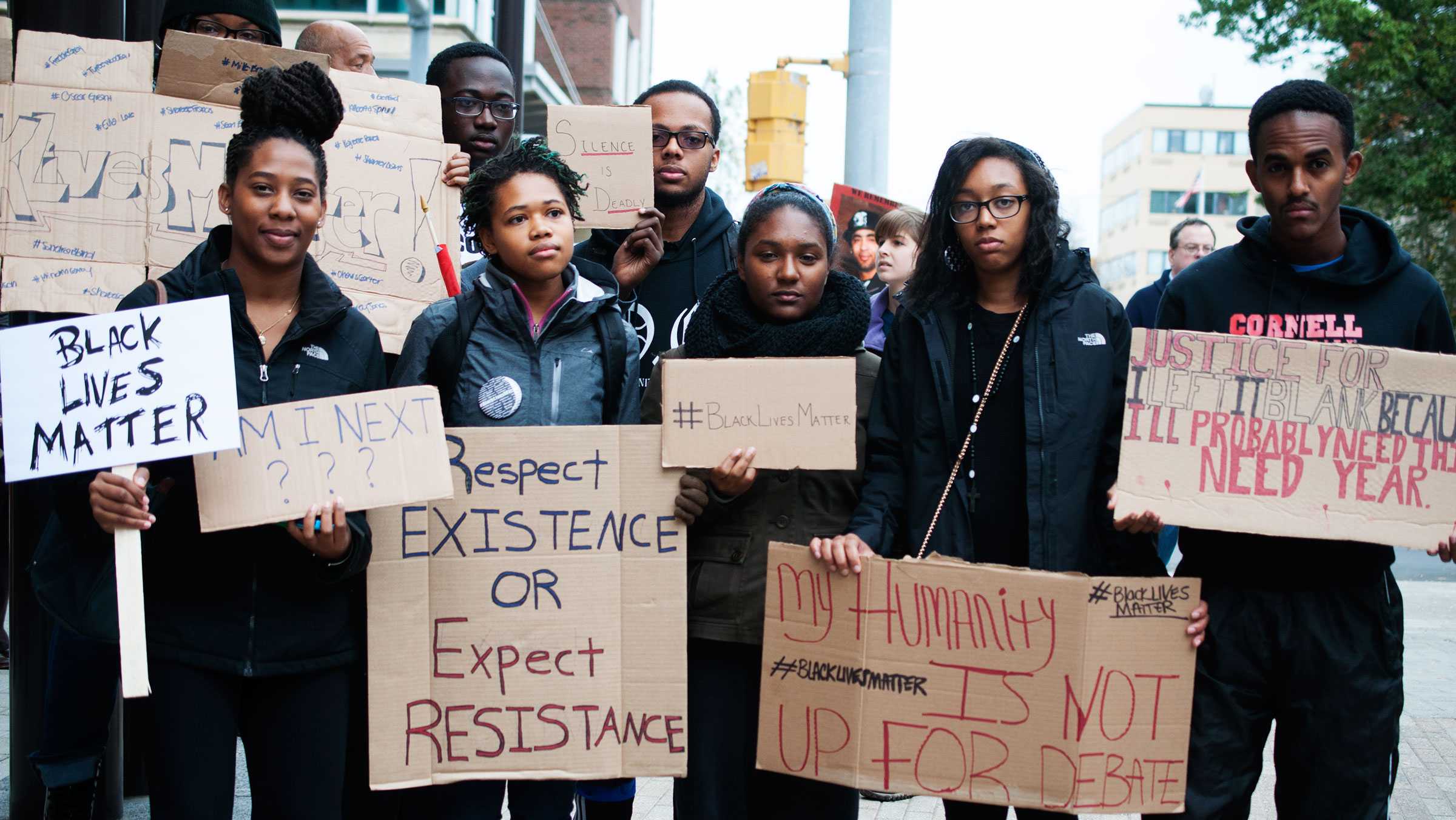 “No justice, no peace, no racist police.”

Around 300 people chanted these phrases during a Black Lives Matter solidarity march Oct. 24 that started from the Bernie Milton Pavilion on The Commons and went down Seneca and Tioga Streets to Beverly J. Martin Elementary School.

The event, titled “Black Lives Matter: A Community Conversation on Surviving and Thriving,” was organized by an informal group of local activists, residents, professors and students. It began with the march, which then led to a three-hour teach-in at the elementary school, with talks on different topics from a number of panelists.

The main organizers of the event were Bobby Joe Smith II, a graduate student at Cornell University; Russell Rickford, assistant professor at Cornell University; and Leon Lawrence, a retired Cornell administrator. The group began planning the community event in July, after a June 17 mass shooting at Emanuel African Methodist Church in Charleston, South Carolina, took the lives of nine people.

The group aimed to inform “people of conscience” who wanted learn more about the Black Lives Matter movement and speak about the forms of violence and insecurity the people of color face in the Ithaca community.

Some of the topics covered were food justice, the problems with homelessness and gentrification, the importance of the Say Her Name movement and the lack of social change within different academic and business institutions.

The teach-in had eight panelists, all of whom had an opportunity to touch on different topics for about 10 minutes.

“We’re here as a statement and a testament — Black Lives Matter,” Bradwell said. “And the way institutions and universities are practicing diversity has become a new form of racism. Diversity without commitment is exactly what Ithaca College students are protesting on Ithaca College’s campus.”

After the panelists spoke, audience members were invited to ask questions or present comments on the topics discussed. One of the audience members asked why there wasn’t more anger from the people organizing the event and the people in general, which left many wondering if anger was really necessary.

“What does anger get you? There is an assumption that if you are a black person you already are mad, and anger only gets you so far,” said local resident Kristina Camille.

After the teach-in, three breakout sessions were offered, which covered different topics regarding the movement.

The sessions included “Brothers & Sisters: Showing Up for One Another,” moderated by Tommy Miller and Davi Mozie; “Gentrification and Food Justice,” led by Rafa Aponte, local activist, and Smith; and “Know Your Rights Training/Policy Work,” led by RahK Lash, assistant director for multicultural affairs in the Office of Student Engagement and Multicultural Affairs.

After the breakout sessions, Smith offered a call to action. In it he proposed for those who attended to not let the momentum stop at the event. He encouraged those to join other already existing groups that are also in the fight for equality.

The event was concluded by the singing of “The Black National Anthem” — “Lift Ev’ry Voice and Sing.” Rickford said he thinks the movement is one of the more compelling movements to come about.

“Black Lives Matter is one of the most exciting movements to emerge in a long time. I think it’s promising in a matter of different ways,” Rickford said. “Its message, which seems simplistic, actually raises a critical question of survival and of human dignity, particularly in our current historical moment.”

Future plans for the organizers are unclear, but one of their main goals for when they meet again is to move on from the discussion to more strategic actions.

“One of our main reasons of the event was to show the issues happening in Ithaca now. Often, when it comes to movements like this, people say it doesn’t happen in our community or city,” Smith said. “However things that seem to be exclusively ‘national’ issues are also ‘local’ issues. We need to show the problems we have and take our next steps towards action, not just conversation.”