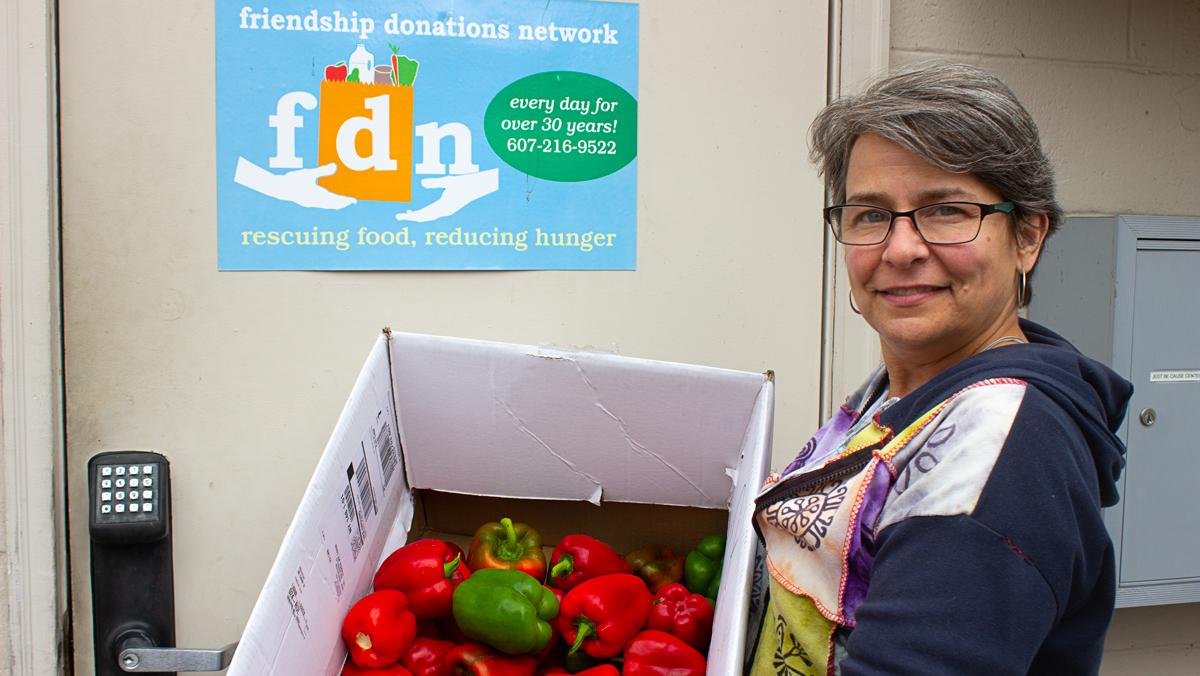 Every Friday, David Harker, director of the Center for Civic Engagement at Ithaca College, loads boxes of fresh fruit, vegetables and bread from the Friendship Donations Network’s (FDN) pantry. The food, once rejects from local establishments and destined for the trash, is redistributed throughout the community, including at the college.

FDN’s goal is to redistribute perishable items — gathered from various local food chains including Wegmans, Ithaca Bakery, Panera Bread and Ithaca Farmers Market — to eliminate food waste. As a result, Ithaca community members, including college students, get access to healthy food such as bags of produce with some bruised or slightly damaged items, surplus kale and still-fresh breads. As a result, the food is also kept out of landfills.

Harker brings the food back to the college’s food pantry located in the DeMotte Room in the Campus Center as well as a monthly pop-up pantry at the Athletics and Events Center.

“It’s a great way for Ithaca College and the community to look within itself and the way we talk about food,” Harker said.

By collaborating with organizations like the FDN, the college is able to partially address the issues of food insecurity and general lack of nutritious diets within the campus community, Harker said. Approximately 36% of students struggle to afford food, according to the 2016 Campus Climate Survey. Some students also came forward detailing their experiences with food insecurity in October 2018, according to previous reporting from The Ithacan. Currently, a residential meal plan at the college costs $3,400 per semester while a commuter plan costs $1,200 per semester.

FDN rescues approximately 500,000 pounds of fresh food locally per year that would otherwise be wasted. According to FDN, the average American eats about 603 pounds of whole fruits and vegetables a year, which means FDN can provide vegetables for approximately 829 people. Over one-third of the food produced on Earth is never eaten and ends up being thrown out, according to National Geographic.

Carolyn Tomaino ’87 is currently the interim coordinator for FDN. After graduating from the college with a degree in philosophy and religion, she said, she was drawn to nonprofit work and eventually ended up at the organization. In her position, she forms relationships with other local organizations — including the college, Youth Farm Project, Cornell Bread N’ Butter Pantry, Lansing Summer Lunchbox and more — to provide FDN’s services to the greater community.

College students are often drawn to FDN because of the organization’s combination of sustainability and equity, Harker said. Approximately 20% of FDN’s volunteers are college students, Tomaino said.

Senior Alexandra Rose interns with FDN, and she said she was drawn to FDN because of the organization’s unique approach to tackling local hunger.

“I remember sitting with my parents when I was younger, and they told me that it was okay to throw food out because it was biodegradable,” Rose said. “That just isn’t always true. I didn’t know then that food waste was such a problem.”

College-age volunteers are helpful when it comes to social media outreach because approximately 80% of volunteers with FDN are retirees, who tend to be less familiar with online platforms, Tomaino said.

“I don’t do much with Twitter or Instagram,” Tomaino said. “I call on people like Alexandra for stuff like that. It’s not in my wheelhouse. It’s great to have students and young people who are studying outreach right now.”

By getting involved with off-campus service organizations, students can feel more connected to their community, Rose said.

“People who are older bring a lot to the table,” Rose said. “They have a lot of wisdom and life experience. But when young people get involved in their community, they bring a certain energy that’s really special.”

As the world aims to tackle food insecurity, it is important to utilize food redistribution, Harker said.

“We have more than enough food on the planet,” Harker said. “People should not be going hungry.”