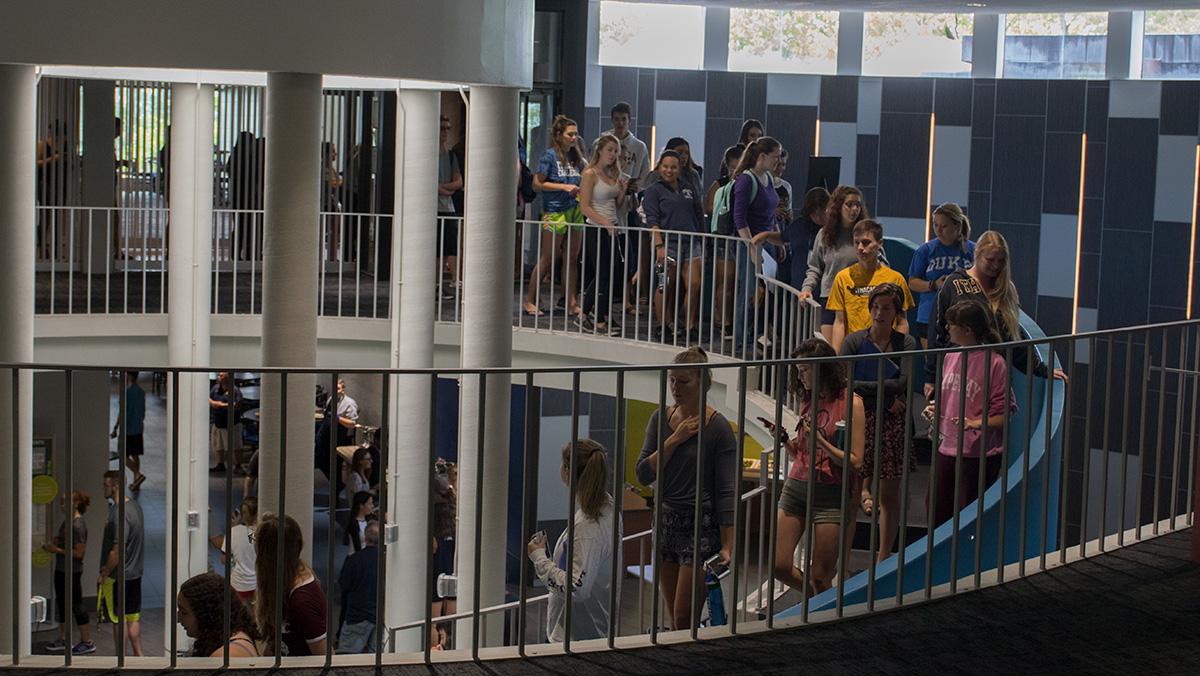 Connor Lang/The Ithacan
At the start of the semester, Terrace Dining Hall was having issues —long lines, food shortages and a lack of student employees made it a rough start to the year. Since then, some of these problems have been resolved but students are still noticing issues.
By Sierra Guardiola — Contributing writer
Published: September 19, 2016

Though the Terrace Dining Hall at Ithaca College underwent major renovations this year, it has experienced new problems with staffing and operations.

Jeffrey Scott, Sodexo area general manager, said attendance in the dining hall has been up about 10 percent so far this semester, which he said could be attributed to the renovations. However, the dining hall experienced a shortage of student employees and is also missing a chef manager, a position responsible for overseeing the operations of the kitchen, production, inventory and managerial duties.

This position has been open since the beginning of the semester, when the previous chef manager took a job at Towers Dining Hall as the lead cook, Sarah Drumheller, service supervisor at Terrace Dining Hall, said. To fill the chef manager position, dining services first has to find a candidate for the position, and then there is a monthlong process to adequately vet the employee for the job through background checks and training.

“That left a big space as far as ordering and doing inventory,” she said, which causes common shortages in items such as milk and even main entrees. “I think that the management find themselves scrambling to fill in the gaps, and they’re probably realizing that there is a lot they didn’t know that needed to be done.”

Terraces also added Late Night hours, which were previously held at Towers; however, the Late Night staff at Towers was not large enough for Terraces, a larger dining hall, Drumheller said. Because they have been so short staffed during Late Night, Drumheller said, students are having to stay longer than they had originally anticipated, often with their shift ending at 1 a.m. rather than at 12:30 a.m.

Students have also noticed that certain stations in Terraces have been closed frequently, like Simple Servings, which is essential for students with dietary restrictions or allergies.

Freshman Katherine Snyder, who cannot eat gluten, said it is hard for her to find food to eat when Simple Servings is closed, so she often ends up eating Lucky Charms, a gluten-free cereal, for meals.

“That’s how I eat dinner,” she said. “I have to look at all the signs every time I go to Late Night to read through all the ingredients just to see if I can eat something.”

The reason Simple Servings was often not open, Scott said, is because Terraces had trouble finding enough student staffers to run the stations.

“The plan is to have Simple Servings open for lunch and dinner every day,” he said. “If it’s not open for a specific meal, it was a staffing challenge.”

Drumheller said it has been difficult to find student staff because some students are involved in so many other activities on campus. She said students could also be deterred from working at Terraces because it is not a “glamorous” job.

“I’ve heard other people say that they’re a little bit embarrassed to be seen by their peers working at the dining hall,” she said.

Student employees at Terrace Dining Hall receive a wage of $9 an hour. Scott did not comment if dining services is doing anything to improve the student positions in order to entice more employees for the jobs. They are currently recruiting students and have also made 80 more hires since Sept. 5, Scott said.

Sophomore Ziya Morris, a current employee at Terrace Dining Hall, said she has noticed that there have been fewer people working there — especially the prep cooks — and that more students are coming to the dining hall.

“We have had, especially last week, unprecedented numbers of students coming,” Morris said, which she added could also be a reason for why there are food shortages.

Scott said that he anticipates the increased attendance to spread out as students ease into their schedules.

Freshman Maggie Schumacher is one of the students who noticed long lines and a lack of food regularly at Terraces.

“Usually when I get here, I have to wait in line, and by the time I get to the food, they run out of the things I want, and I just have to settle,” Schumacher said.

Sophomore Alexis Arter said she has noticed that dinner and Late Night rushes cause lines to wrap around the staircase and that at the end of rushes, stations have run out of food altogether.

To prevent these backups, Scott said they have added a separate entree line across from the dish drop. He said many students are not enticed to go over and look at the options at the stations on the opposite side of the dining hall, so signs presenting what is being offered over there are a possible solution to help ease the traffic.

Scott said all the challenges the dining hall has been facing since the beginning of the semester are going to be resolved, but he could not give an exact time frame. He said a Food Advisory Committee, made up of students appointed by the Student Government Association, will help with any questions or concerns about the dining halls.

“We are working on it every day,” Scott said. “You should start seeing immediate improvements.”