Looking out for student safety: SASP celebrates 45 years at IC 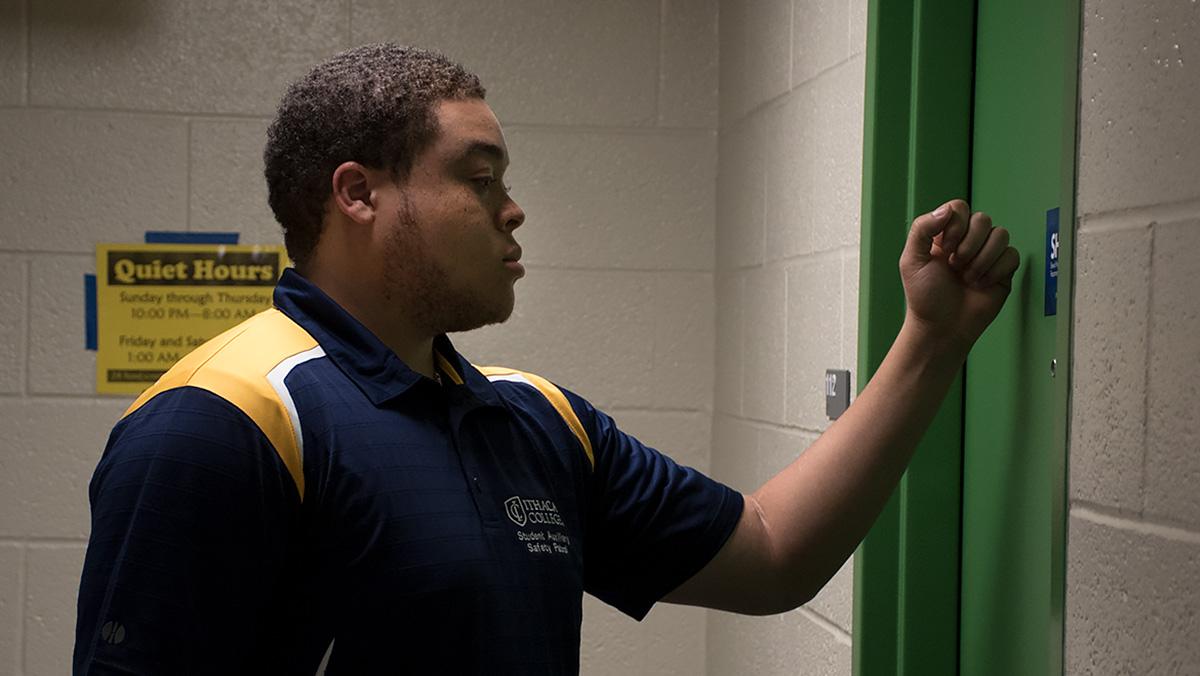 Ash Williams/The Ithacan
Ithaca College senior, Hakeem Hopper-Collins, executive director of the Student Auxiliary Safety Patrol, knocks on a door as part of his patrol. SASP is a group of 25 students who provide assistance and support to the college’s Office of Public Safety and Emergency Management.
By Ana Borruto — Staff Writer
Published: September 19, 2016

From Mario Kart–style golf-cart chases, to a string of stolen traffic cones, to nighttime trespassers in the natural lands, members of the Student Auxiliary Safety Patrol — now in its 45th year as a student organization — said they have experienced it all while pursuing their mission to make the Ithaca College campus safer.

SASP is a group of 25 students who provide assistance and support to the college’s Office of Public Safety and Emergency Management from 9 p.m. to 1 a.m. Sunday to Thursday and 9 p.m. to 3 a.m. on Friday and Saturday. These student officers patrol residence halls, provide escorts for students, check the campus’s blue-light emergency phones and offer extra security at special events.

SASP was established at the college in 1971. To become a SASP member, a student must go through a trainee phase, which requires 12 hours of classroom instruction and four weeks of training, including CPR certification. Applicants must have at least a 2.6 GPA, good standing with Student Financial Services and a clean history with the Office of Judicial Affairs.

Senior Hakeem Hopper-Collins, executive director of SASP, said he began training to become a “SASPer” when he was a freshman.

“My initial interest was I really wanted a job, and I liked walking around at night,” Hopper-Collins said. “I guess without wanting to help people be safe, I wouldn’t be in this job, so that also plays a huge role in why I decided to join.”

Hopper-Collins said SASP represents the bridge between Public Safety and students. He said being a student and having authority over other students does not bother him — his top priority is keeping his peers safe.

“We’re not doing it to get people in trouble,” Hopper-Collins said. “I think it would be a lot more comfortable as a student to have a SASPer come to my door and tell me to quiet down than somebody else.”

Hopper-Collins said SASP has the power to issue parking tickets and write up judicial referrals for student misconduct. Crystal Young, coordinator for administrative and operational support service in the Office of Public Safety, said that often when there is an on-campus situation, SASP checks it out first and then radios Public Safety.

Hopper-Collins said SASP members have experienced several incidents where they needed to jump into action. Once, a student stole a golf cart and went on a joyride to the Towers parking lot; there have been reports of arson; and more recently, a student fell off their Clarke Hall balcony. Xavier Gonzalez, a training coordinator for SASP, said that in situations like these, SASP members typically stay on the scene to take notes and provide assistance if necessary.

“For me, it’s instant adrenaline that kicks in,” Gonzalez said.

These types of occurrences are rare on campus. Hopper-Collins said that on a typical night for him, after locking up the required buildings, he enjoys going through the academic areas where other students are. Residential assistants are restricted from patrolling those areas, whereas SASP is not.

“I’m able to see other parts of the campus,” Hopper-Collins said. “If my area includes SubConnect, I absolutely make a stop at SubConnect.”

Young said there are more student officers than Public Safety officers, so they appreciate the help SASP contributes.

“Our officers completely depend on them,” Young said.

Being a student officer also means knowing the language. For instance, SASP officers use military time during their patrols and when they are communicating with Public Safety. During training, they learn a radio alphabet to keep their calls accurate and concise. This is used when spelling out a license plate or names to dispatch. For example, Hopper-Collins said when radioing in “natural lands,” he would say, “Nora-Adam-Tom-Union-Robert-Adam-Lincoln, Lincoln-Adam-Nora-David-Sam.

Gonzalez said having this job has helped him with his confidence and communication skills.

“Communication is key when talking to dispatch,” Gonzalez said. “Even if it’s something on the fly, it helps you develop better words to say.”

SASP allows officers to form relationships with the rest of the community as well as friendships within their group.

“We all just get so close,” Hopper-Collins said. “You get to know the campus very well.”

Gonzalez said his passion to help others is what drew him to this job. Since joining, he said, he has formed strong relationships with other members.

“It keeps me active,” Gonzalez said. “It’s a great experience, and you get to meet so many people from different majors.”

For 45 years, SASP has evolved technologically and programmatically. One of these changes includes a fully electronic system for locking down either academic or residential buildings at night. In the past, officers would check each door and physically write down the time, which Hopper-Collins said was tedious. Now, he said they use a designated device for the process. Another change, implemented this year, is that SASP now handles crowd control at Tompkins Consolidated Area Transit stops.

SASP members said they not only have good relationships with Public Safety, others within their group and other campus community members, but there is also a strong SASP alumni network. Young said she plans on holding a reunion over alumni weekend, Oct. 7, at the Office of Public Safety.

This year, SASP said it hopes to hire about 10 to 12 new people. Hopper-Collins and Gonzalez encourage students to apply because they said it is beneficial when building a resume.