New bus shelter outside Park Hall to be installed this fall 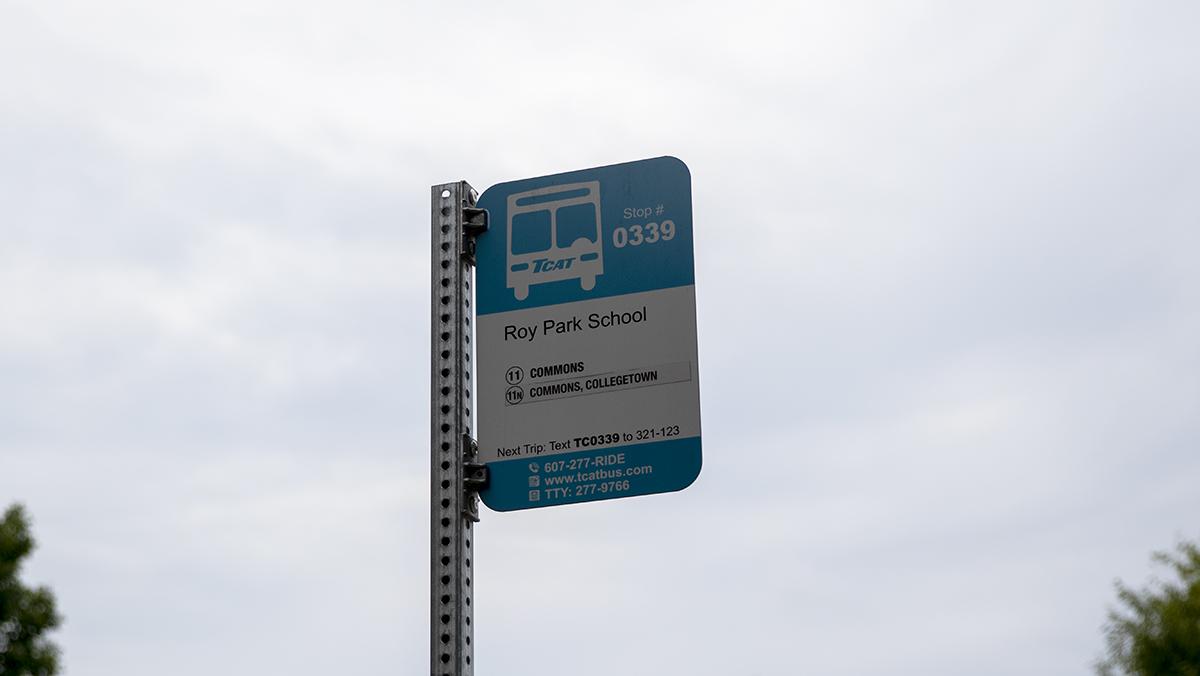 Ithaca College is planning to install a bus shelter outside of Roy H. Park Hall this fall.

The college currently has a bus shelter near the Peggy Ryan Williams Center (PRW), but after receiving student feedback, decided to install another shelter outside of Park Hall. Tim Carey, associate vice president for the Office of Facilities, said he received a request for the bus shelter from junior Deontae Guy, president of the Student Governance Council (SGC).

Guy said he had attended an event hosted by the Tompkins County Area Transit (TCAT) that was focused on transportation for college students, including students at Cornell University and Ithaca College. Guy said he presented the idea of moving the current bus shelter at PRW to Park Hall to Carey, because more students use the TCAT stop by Park Hall.

“Some academic buildings have the privilege of the first set of doors being open, and then the second doors being locked [on the weekends], but Park is just locked all the way around,” Guy said. “So it makes more sense that when it’s snowing, or when it’s raining and if a student doesn’t have an umbrella does have a jacket, whatever it is, for them to be under a bus shelter, right outside Park.”

The average lowest temperature in Ithaca is 37 degrees and the average annual snowfall is 65 inches, according to U.S. Climate Data. Inclement weather has forced buildings on campus to close and disrupted students’ transportation in past academic years.

Guy said Carey proposed keeping the current bus shelter near PRW and building an entirely new bus shelter outside of the Park School.

“Following a few conversations with Guy, it was determined that the project made great sense for our students, so I included it in the FY22 capital budget,” Carey said via email.

During its May meeting , the Board of Trustees approved the recommended $198.4 million operating expense budget for the 2021–22 fiscal year. The board also approved a $8.86 million capital budget, which includes $2.75 million for deferred maintenance projects, $1.2 million for IT upgrades and $1 million for residence hall upgrades.

Carey said he had expected the project to be complete prior to the beginning of the fall semester, but it was delayed due to a nation-wide backlog on construction materials, as a result of the ongoing COVID-19 pandemic.

“Once the building materials are received, the IC Maintenance team will construct the shelter,” Carey said via email. “Although I cannot provide a firm estimated date of completion, we are hoping to have the project concluded sometime this fall.”

Junior Natalie Tribiano said she thought the bus shelter was a great idea because it would protect students against rain and snow.

“It kind of sucks to sit out and get soaked,” she said. “And then you have to wait. I think it would look really cute. I also think it would make it more obvious that this is a bus stop, with a place to wait, because you can’t really tell when you look at the really small sign.”

She said that when she was a freshman, she would get confused about the different times and locations of the bus system, so she would like to see a larger sign on the new bus shelter as well.

Senior Catriona Ferguson said she also used the TCAT system her freshman and sophomore year. She said she would wait for the bus in Park Hall because of the cold weather and was worried that the driver would not see her and she would not get picked up. She said she would like to see an emphasis placed on students’ safety for the new bus shelter.

“I think they should be aware of how cold it is, obviously, and the people building it are probably from here, so they probably know that,” Ferguson said. “But also the fact that there are young students that are going to be waiting there, so that includes a lot of young women.”

Ferguson said she would like to see a blue-light telephone  — a system that links the caller to the Office of Public Safety and Emergency Management — in the bus shelter.

Guy said he thought the entire process, from proposing the idea to when the bus shelter is built, demonstrated how students can utilize their resources at the college to make small changes

“Sometimes you don’t necessarily need to pass a bill to make something happen,” Guy said. “Most of the time it’s just asking, because it’s not that someone might not want to do it, it’s just the fact that it could be two things: one, no one has asked or brought up the idea, or two, it could be happening in a different way, shape or form, but it’s not amplified to where people know about it. So in this case, all we had to do was ask.”