New hotel on The Commons to open mid to late October 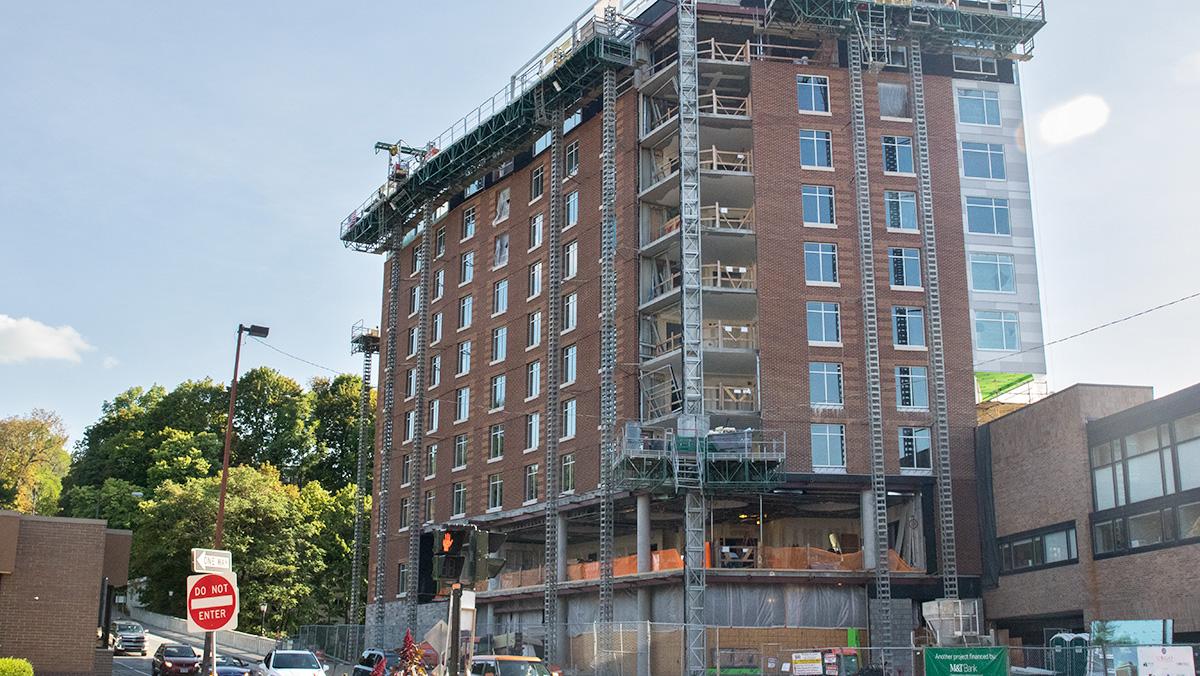 Annie Carlson/The Ithacan
The 159-room hotel is built on what was previously an empty lot on 120 South Aurora St., on the corner of The Commons. It is expected to open in mid to late October.
By Sophia Adamucci — Contributing Writer
Published: September 18, 2016

Following 18 months of construction, the new Marriott Hotel in downtown Ithaca is nearing completion and is expected to open in mid to late October.

The 159-room hotel is built on what was previously an empty lot on 120 South Aurora St., on the corner of The Commons. Matt Jalazo, vice president of development for Urgo Hotels and Resorts, the management company that facilitated the construction and is overseeing management, said he is anticipating 40–50 thousand visitors annually. He said the management is going through the hiring process, but he could not give an estimate of how many jobs will be created.

JoAnn Cornish, director of planning and economic development for the City of Ithaca, said this large-scale construction project will help feed the demand for more hotel rooms in downtown Ithaca.

“The vacancy rate for hotels is very low in Ithaca when compared to the national average,” Cornish said, estimating about 20 percent vacancy rate in Ithaca and 50 to 60 percent nationally. “We have a very robust tourist trade. If people are going to come visit, The Commons are the No. 1 tourist attraction in Tompkins County.”

With both Ithaca College and Cornell University, plus a growing number of small businesses, in the area, more hotel rooms will help facilitate the influx of tourists and prospective students coming to Ithaca, Jalazo said. Cornish said the goal of building the hotel is to get more foot traffic on The Commons and increase revenue for the businesses downtown.

“We built the hotel, honestly, because there is a demand from multiple sources,” Jalazo said. “We saw an opportunity to build quality hotel rooms and fill the demand.”

Ithaca College sophomore April Carroll, a longtime resident in the town of Ithaca, had a positive response to the increased construction in recent years.

“There is always construction in Ithaca,” she said. “In the 11 years I’ve lived here, there has always been construction. It’s good to have hotels here because it means more potential students.”

The Marriott will join several pre–existing hotels in the area, including the Hotel Ithaca and the Hilton Garden Inn, which have buoyed Ithaca’s economy recently, Cornish said.

“We now have a core group of hotels,” she said. “Our next hope is to get a conference center downtown. I think we’re going to see a lot of activity in the foreseeable future. It is not slowing down soon.”