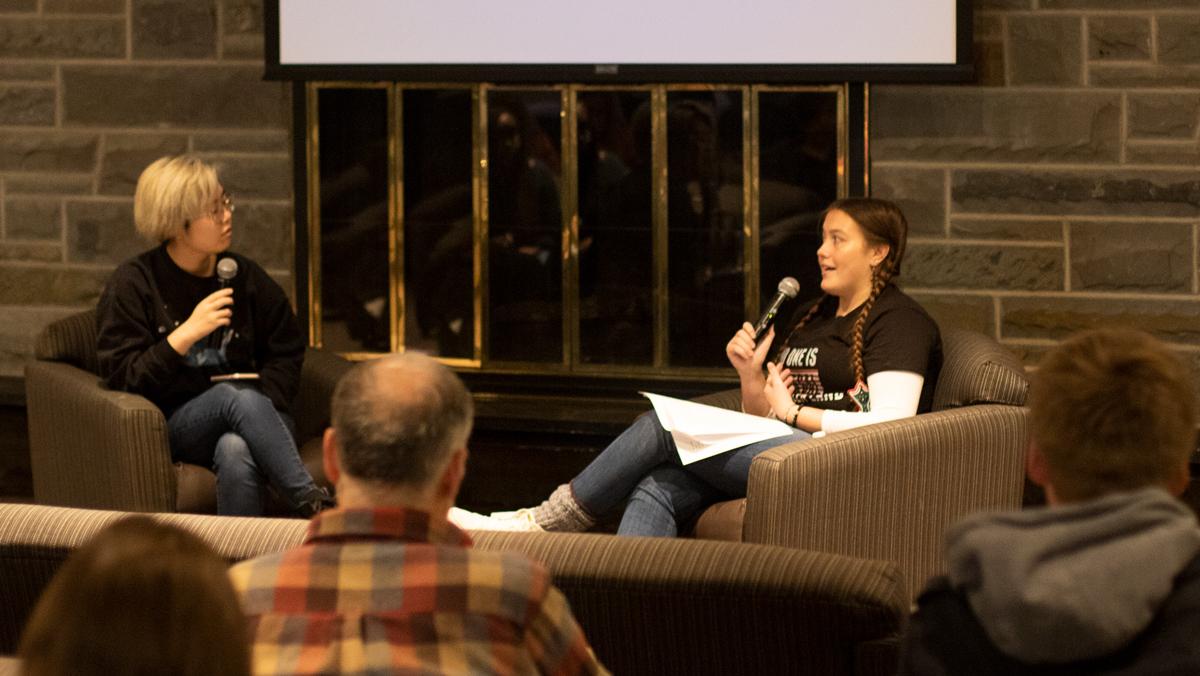 Ithaca College sophomore Peyton Falk talked about the struggles indigenous people face and the activism she has done to combat those struggles as an indigenous woman in front of approximately 10 students, staff and faculty Nov. 12.

Falk spoke as a part of the long-term project IC Voices that began this semester through the Center for Inclusion, Diversity, Equity and Social Change (IDEAS). The project’s focus is to document the activist work students at the college have done.

Junior Hana Cho, who thought of the project, asked Falk a series of questions and then followed up with questions from audience members. The event was recorded for archival purposes.

Falk talked about the work she has done for groups like the United National Indian Tribal Youth (UNITY) and the Iowa Tribe Of Oklahoma and as a speaker for the Missing and Murdered Indigenous Women (MMIW) movement. UNITY seeks to improve conditions for indigenous people in the U.S. and Canada through leadership and action, while MMIW seeks to raise awareness for the violence committed against indigenous women. Falk said she is a current member of the Iowa Tribe of Oklahoma, one of two federally recognized tribes for the Iowa Native Americans.

Falk said she was inspired to start activism work at 16 because of the Dakota Access pipeline DAPL) movement that began in 2016 and has since gotten involved with the movement. The DAPL movement was started to protest the construction of an oil pipeline near the Standing Rock Indian Reservation because of the possible damage the pipeline could do to the reservation’s water supply.

Falk said she believes there is more people can do to help promote the rights of Native Americans.

“To be an ally of native people, you have to stand up at all times, not just when your native friends are there,” Falk said. “To be a true ally, you have to talk about indigenous rights and indigenous needs more than just on Indigenous Peoples’ Day.”

Omega Hollies, assistant director for the Center for IDEAS and an organizer of IC Voices, said the project aims to give students a better understanding of the activist work that has taken place at the college.

“Because of the nature of institutions like Ithaca College, memory on campus is very fleeting,” Hollies said. “[Students] are 18–23, so during the time you’re here at campus, you might see three years before and three years after, but you don’t necessarily get a snapshot 10 years before you and 10 years after you.”

Hollies said the Center for IDEAS currently has three future events planned, one for this semester and two for next semester, that will follow the same structure. Hollies said she would like IC Voices to go on indefinitely. Some of the students will be doing live events with a Q&A session, like the one Falk spoke at, while other students will just record their answers to a set list of questions.

Hollies said every student will be asked the same 10 questions, and they are informed of those questions ahead of time so they can prepare better answers.

Cho said she thought of the project because she did not want the activist work students have done to be forgotten after they left the college.

“I came in as a freshman in 2017, and I heard things about POC at IC, but no one was really willing to talk about it, … and I couldn’t find anything with the students’ voice in it,” Cho said. “I was thinking how it’s such a shame that there’s this four year turnover at colleges. … So I wanted to capture people’s voices and uplift those voices because I think it’s really important that their work doesn’t go into thin air when they graduate.”

POC at IC is a group that was formed in 2015 in response to racial tensions on campus. It held protests against former college president Tom Rochon, who resigned after facing heavy criticism from the campus community, as previously reported by The Ithacan.

Junior Timothy Kennedy said he thought the event was interesting because Falk talked about issues that normally do not get covered by the Town of Ithaca or the college.

“Ithaca doesn’t really acknowledge ever that we’re on stolen land or that we have indigenous students here,” Kennedy said. “[The college] should be amplifying those voices more, and events like these are really important.”

Kennedy said the talk Falk gave informed him more about the kind of work students of all ethnicities can do to stay informed about important issues.

“I think it does a good [job] of letting people know we should do our own research and, as she said, taking classes, not just expecting all the information and work to come from minorities and [indigenous] people, but doing our own work to search it out ourselves,” Kennedy said.