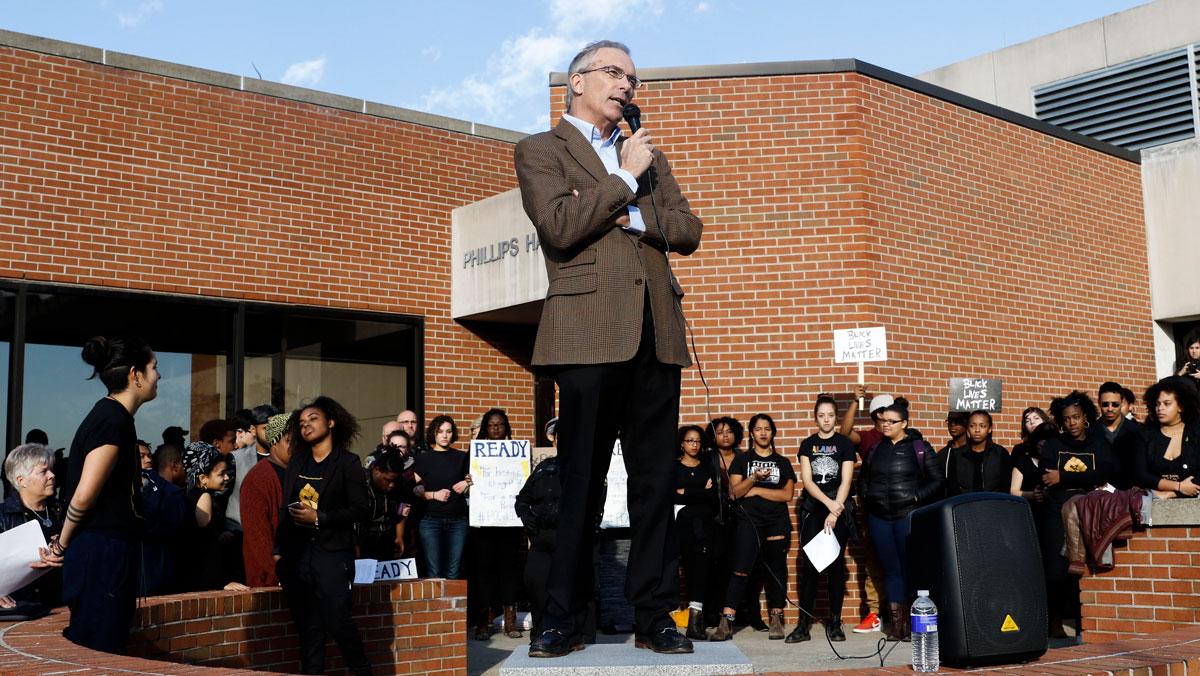 In a Jan. 14 announcement from the college, Rochon said the timing was to allow the Ithaca College Board of Trustees time to organize a search for his successor.

In a post on its Facebook page, POC at IC said, “And there it is: Tom Rochon announces his early retirement from his position effective July 2017. There is power in the collective. We did it! Faculty @ IC did it! Staff @ IC did it! IC Alumni did it! ‪#‎PowerToThePeople.”‬

Rochon wrote that he was “proud of the progress and accomplishments achieved by the college over what will be a nine-year tenure as president.” He listed IC 20/20, the Integrative Core Curriculum and the foundings of the ICNYC center in New York City in 2012 and the Center for Faculty Excellence in 2013 among his successes.

His “perhaps most important” achievement, he said, is holding tuition increases down to historically low levels — with a 2.85 percent increase in the 2015–16 year from the 2014–15 year, which was a 2.95 percent increase, tuition is increasing at its lowest rate since 1965 — and doubling the college’s financial aid budget to nearly $120 million projected for next year.

This announcement comes despite previous statements from Rochon that he intended to stay. In a Nov. 12 interview with The Ithacan, Rochon said he would give “no consideration to resigning.”

“I am completely focused on doing what I consider to being a very important job at a crucial moment in Ithaca College history,” Rochon said at the time.

Rochon had also published a commentary in The Chronicle of Higher Education on Nov. 16, titled “Why embattled leaders should be stepping up, not down.” In the commentary, he discusses the possible “trend” of resigning presidents and calls the wave of campus activism across the country an “opportunity to bring a commitment to inclusion into fuller alignment with a longstanding commitment to diversity.”

However, Rochon acknowledged in the Jan. 14 announcement that he believed “it is best for IC to be led in the future by a president chosen by the board specifically to make a fresh start on these challenges, including those that became apparent to us all last semester.”

He said he would be working with the college community during the next 18 months of his tenure to make “progress on issues on diversity and inclusion, shared governance, and decision making”.

The board of trustees will implement a plan for finding his successor without needing an interim president, according to a statement released by Tom Grape, chair of the board of trustees, and Vice Chair David Lissy. The search process will likely begin this summer, and the board will seek input from students, faculty, staff and alumni on choosing a new president.

The statement highlighted Rochon’s work with implementing the Integrative Core Curriculum in response to an accreditation report calling for the strengthening of the college’s core curriculum; the IC 20/20 plan as a whole; reducing expenses at the college, resulting in lower annual tuition increases; and raising money for the college, including more money for the scholarship endowment than any president in the college’s history.

The statement called the next 18 months “an opportunity” for the board, Rochon and the community to collaborate on solutions to campus issues and to attract a “world-class leader” as the next president.

“We must focus on the serious and important initiatives underway to promote diversity and inclusion on campus. At the same time, we must also address the broader set of concerns raised by faculty, staff and students over the last semester around the areas of college governance, campus culture, shared values and a more engaged leadership with all levels of the IC community.”

The statement criticized some activities on campus during the Fall 2015 semester, including “personal attacks, promulgated misinformation” and harmful social media tactics.

“We also heard from some who felt silenced for expressing opinions that differed from those of their peers or leaders, or that were not in sync with the loudest voices on campus,” according to the statement.

To make progress on the betterment of the college, the statement said civil discourse between differing opinions on campus was necessary.

The statement announced that the board will conduct a self-assessment of its practices and will train the existing trustees and future trustees on cultural awareness. To make progress on developing Shared Governance at the college, the statement also announced that Benjamin Rifkin, provost and vice president for educational affairs, has formed a task group with student, faculty, staff and administrative representatives to “devise new ways to foster more collaboration within our community.”

The Ithaca College Faculty Council released a statement stating it looked forward to working with all constituencies on campus toward advancing the best interests of the college.

“This fall, strong voices raised issues vital to the health of our institution and our society; we as faculty have much work ahead of us,” the statement said. “Faculty Council will work with the entire faculty and benefit from our colleagues’ diverse perspectives to build for the future in collaboration with the broader campus community.”

Dominick Recckio, Student Government Association president, said he was surprised and excited by the announcement.

“I think it really will allow our Ithaca College peers to look forward,” he said. “We are ready to move forward with solutions and finding a president that better serves Ithaca College.”

Recckio said the value sessions held by the SGA in December will be an “integral part” in a guided search for a new college president going forward. SGA created the “Student Values” document, which Recckio said he will make sure members of the board of trustees receive. He said servant leadership is a central tenant of the document.

POC at IC held three major, campuswide protests, protested at an open house, occupied the Peggy Ryan Williams Center for seven days during the week preceding finals week and seized the stage Oct. 27 at an event during which Rochon laid out “action steps to address racism and cultural bias.”

Racially themed protests started in September when resident assistants on campus protested regarding comments made by Public Safety officers at RA training. One officer, Terry O’Prey, said racial profiling does not happen at the college, while another officer, Jon Elmore, said he would shoot anyone on campus with a BB gun.

POC at IC formed following two other events in October.

At the kickoff event for the Blue Sky initiative, alumni J. Christopher Burch ’76 and Bob Kur ’70 called alumna Tatiana Sy ’09 a “savage” multiple times after she described her “savage hunger” for success. The day after the Blue Sky Reimagining Kick-Off event, students received invitations to a racially charged “Preps and Crooks” party that the off-campus fraternity Alpha Epsilon Pi was planning. The statement also lists “systematic oppression of faculty of color” and “disregard for the safety and well-being of students of color.”

Rochon assumed the position of president of the college on July 1, 2008. Before becoming president of the college, he was the executive vice president and chief academic officer at the University of St. Thomas in Saint Paul, Minnesota, from 2003 to 2008. He served as the executive director of the Graduate Records Examination Program at the Educational Testing Service from 2000 to 2003. He previously worked at Claremont Graduate University, where he served as interim provost and vice president for academic affairs and dean of the School of Politics and Economics.