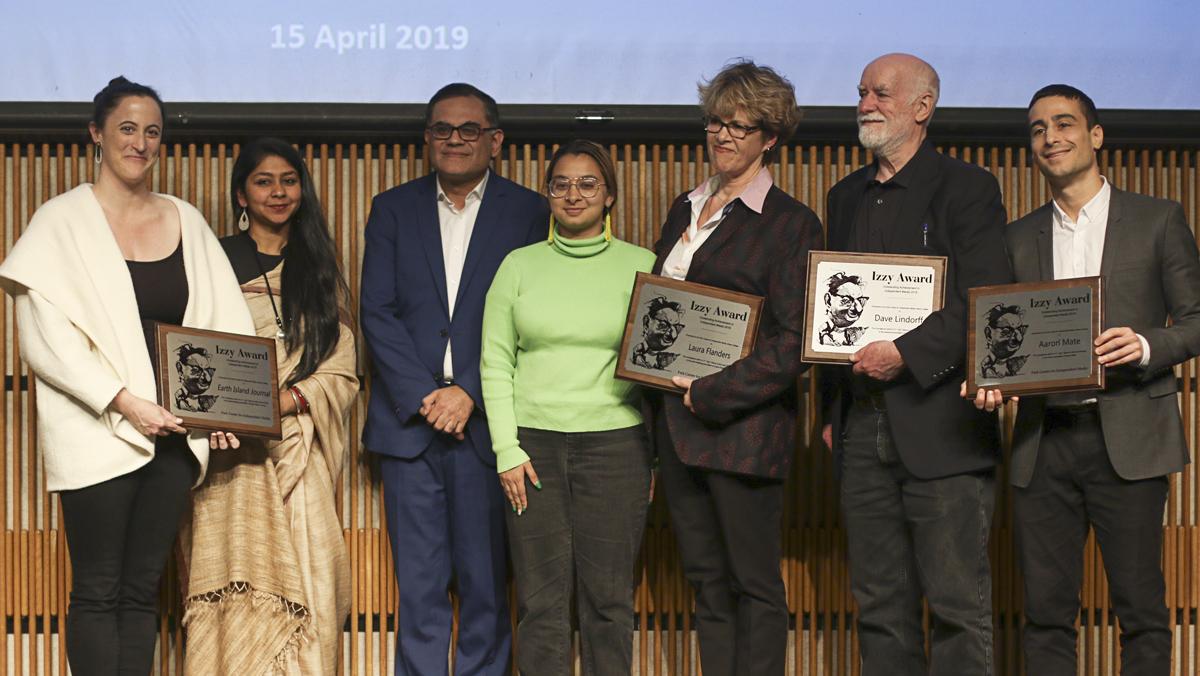 The Izzy Award celebrates and honors journalists who display outstanding achievement in independent media — media produced outside of traditional corporate structures. The award was created by PCIM under the leadership of Jeff Cohen. It is named after Izzy Stone, an investigative journalist who founded I. F. Stone’s Weekly, a progressive newsletter, in 1953. The first Izzy Award was presented in 2009. The judges look for an independent outlet, journalist or producer who contributes to culture, politics or journalism outside of normal societal standards.

Earth Island Journal received the Izzy Award for its autumn 2018 issue titled “Womxn and the Environment: A Celebration, A Reckoning, A Call to Arms,” which highlighted female and indigenous climate advocates, scientists and policymakers.

Maureen Nandini Mitra, Earth Island Journal editor, gave the acceptance speech on behalf of her and fellow editor, Zoe Loftus-Farren. Mitra said she never knew she would become an editor when she was younger.

“Journalism was not one of my top professional choices until much, much later,” Mitra said. “When it did, like most of you here aspiring journalists, I probably imagined myself chatting around the world in dangerous locations and warzones. I did some of that, but I never imagined myself being an editor.”

She has been a journalist for 22 years and said she appreciates the importance of the job.

“Most days, I do love this job,” Mitra said. “I love being a publisher. I can’t say it’s happy work. Every other day I deal with news and stories that are so heartbreaking that I run away to the restroom to have a little weep. But it is meaningful work — it is important work — and, most days, it is enough.”

Dave Lindorff also received the Izzy Award for his piece in “The Nation” that investigated how the Pentagon produces its annual financial reports and funding requests to Congress. Lindorff graduated from Wesleyan University with a degree in Chinese and realized his passion for journalism toward the end of his college career.

“What really inspired me to be a journalist, when I started doing it, was I. F. Stone and his work on the Vietnam War,” Lindorff said.

Aaron Maté received the Izzy Award for his persistence toward finding out the truth behind the “Russia election collusion” story, primarily during his reporting for “The Nation.” During his acceptance speech, he discussed the importance of relying on factual evidence in journalism.

“Journalism is about following the facts — drawing conclusions and inferences based on the available evidence,” Maté said.

Maté also spoke about the President Donald Trump and Russia conspiracy. He said he believes the mainstream media has been promulgating a false narrative that Trump colluded with the Russian government during the 2016 campaign.

“In short, I think Mueller’s pro show that the Trump-Russia collusion narrative embraced by the U.S. media political establishment is largely a work of fiction,” Maté said.

Maté said he believes journalists need to be more skeptical of claims from the intelligence community.

“Whatever allegation is made, there must be concrete evidence,” Maté said.

The last Izzy Award winner, Laura Flanders, was honored for her work as host and executive producer of “The Laura Flanders Show,” which investigates racism, sexism and economic exclusion.

She was introduced to the stage through a short promo from her show. Flanders gave a speech about the current state of journalism. Flanders said she believes that there has been a lot of change regarding journalism in the past 30 years.

“We have heard a lot in the past two years about crisis in journalism,” Flanders said. “If we had reported as much on the crisis in the communities that have lost their local papers as we have on the losing of local papers then we would have a much better sense of what is happening in this country.”

This was the first time PCIM Director Raza Rumi organized the award ceremony since he became the PCIM director in Fall 2018. He said he loved every part of the night.

“What I liked the most is the fact that we had these outstanding people coming and flying into Ithaca and speaking to the audience,” Rumi said. “I think what stands out to me is you can see that the team of all four winners have challenged the dominant narratives to be here in the media for what we do.”

Rumi said he believes the Izzy Award is a great way to shine a light on high–quality journalism.

“Independent journalism has never been so relevant,” Rumi said.

Samarra Mbenga, who attended the event, said she was glad the college was celebrating journalists.

“It’s hopeful, and I don’t know how they keep their hope,” she said. “It’s nice to know that people out there are writing their different perspectives.”