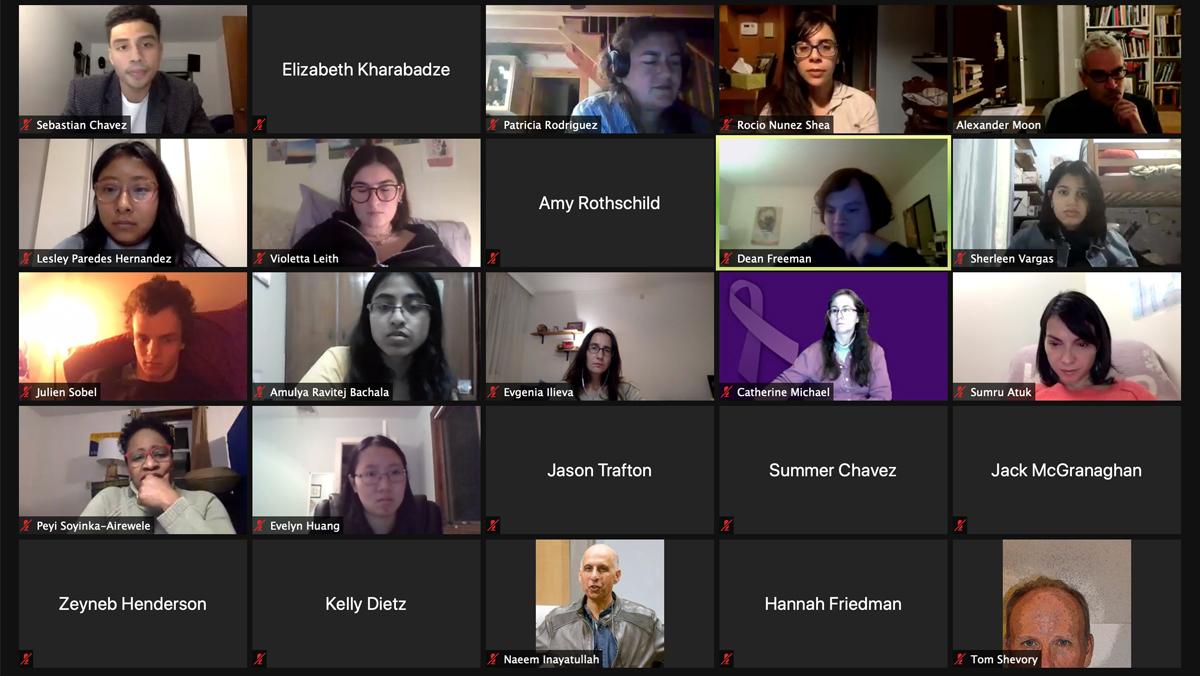 Courtesy of the Department of Politics
The discussion was held Oct. 29 and centered around what could happen following the 2020 presidential election Nov. 3. Other topics ranged from police brutality and the Black Lives Matter movement to voter suppression and the Supreme Court.
By Elizabeth Kharabadze — Contributing Writer
Published: November 3, 2020

The Ithaca College Department of Politics hosted “Back to the Future: The What Ifs of Elections 2020” to discuss key issues of the 2020 election and address student concerns regarding election outcomes.

The discussion was held Oct. 29 and centered around what could happen following the 2020 presidential election Nov. 3. Other topics ranged from police brutality and the Black Lives Matter movement to voter suppression and the Supreme Court. Panelists included Rocío Núñez Shea, lecturer in the Department of Journalism; Alexander Moon, assistant professor in the Department of Politics; sophomore Sherleen Vargas; and junior Sebastian Chavez, senator of the Students of Color Coalition for the Student Government Council. Junior Lesley Paredes Hernandez and sophomore Amulya Ravitej Bachala were the moderators. Approximately 18 people attended the event.

“While the content of the debates is important, for sure, what people tend to focus on and tend to walk away from is our collective memory of what we saw, what we heard, how they talked, how they moved,” Núñez Shea said.

Núñez Shea compared the first presidential debate to that of former presidents John F. Kennedy and Richard Nixon in 1960. She said she recalled how that debate was largely remembered by how the presidential candidates looked. While Kennedy was seen as younger and more dynamic, Nixon appeared to be sickly following a previous case of the flu and a five o’clock shadow. Following the debate, Kennedy won both the popular vote and the electoral vote.

Vargas talked about voter suppression and said both the COVID-19 pandemic and false statements from the president regarding mail-in voting have made it increasingly difficult for voters to access polling sites or to submit mail-in ballots. Leading up to the election, Trump has made several claims suggesting that mail-in voting is fraudulent.

“Someone might say if you can’t physically go to a voting location, then just mail your ballot,” Vargas said. “Yes, you definitely can do that. But tell that to the 500,000 people whose ballots were rejected because they filled them out incorrectly or to the people whose ballots almost burned in Boston after a man set the whole [ballot drop box] on fire.”

According to NPR, it is too late to mail in a ballot in some states, and election officials are recommending delivering ballots by hand to ballot drop boxes or voting locations or voting in person. In some states, absentee ballots have to be received on Election Day. In New York state, mail-in ballots must be postmarked by Election Day.

Vargas said that she was born in the Dominican Republic and has been living in the U.S. for approximately eight years. However, Vargas said she is unable to vote in the upcoming election, as New York state law prohibits individuals from voting if they have not yet been naturalized. Naturalization is the process to become a U.S. citizen for individuals born outside the U.S. There are currently 96 international students studying at the college, according to the 2020–21 Facts in Brief.

“I can live in this country and be affected by the results of the election the same as everyone else around me,” Vargas said. “Yet, I cannot take part in that decision.”

Chavez said that Black and brown Americans aren’t properly represented in the U.S because of the hatred and violence against minority groups.

“Minorities have to remember that we do not have ties to America except for colonization and oppression,” Chavez said. “Even though minorities built this country from the ground up, that does not mean it was meant for us.”

In September, 70% of Black voters under 30 favored Democratic presidential nominee Joe Biden, compared to 20% in favor of Trump, according to Forbes. Among Hispanic voters under 30, 62% favor Biden, while support for Trump climbed up from 27% to 36% from June to September 2020.

Moon said that tensions following the election will depend on how close the election results are. He said he expects that there will be lawsuits filed by Republican Party organizations in the states where those results are close. In Texas, a total of 9,009,850 people have already taken part in early voting or by mail-in ballots as of Oct. 30. Urban Democratic communities, like Houston, have seen larger voter turnouts. Harris County, Texas, where Houston is located, increased its number of early-voting and voting hours so more residents can vote at times and places convenient to them. Brandon Rottinghaus, political scientist at the University of Houston, said 1.5 million voters need to vote for Democrats to have a chance at winning in Texas.

“If it’s largely in favor of Biden, then there’s gonna be a favorable media environment for whatever happens,” Moon said. “That will, I think, determine a lot about how things play out in the courts and people on the streets and so on.”

Moon said that Republicans trying to slow and stop the counting of mail-in ballots is an issue that could affect the outcome of the election. Moon said Republican electors may also vote for Trump regardless of the popular vote.

Junior Violetta Leith questioned the potential tension regarding the election and the willingness to organize and rally in support of Black Lives Matter. Leith said that the tensions across the country between Black Lives Matter protests and counterprotests have played a part in the uncertainty and fear.

“I think now as it gets closer to the election, the Black Lives Matter is being faced with this opposing viewpoint of Trump supporters and how they can’t correlate at all and I think that’s something that’s causing uncertainty,” Leith said.

On Oct. 24 in Ithaca, hundreds of protestors showed up in opposition to a “Back the Blue” rally. The counterprotest was called the “Festival Against Hate,” run by Ithaca Democratic Socialists of America and the Ithaca Pantheras. It remained nonviolent, but over the past month, there have been some political protests that turned violent in Ithaca. Tompkins County is primarily Democratic, with 28,972 active registered Democrats and 11,070 active registered Republicans as of February 2019.

Peyi Soyinka-Airewele, professor in the Department of Politics, said it is important that voters understand the roles they play in their communities.

“I keep asking myself, what does it mean to have a role?” Soyinka-Airewele said. “We all have to look back at where you came from, what’s happened in your community, what has changed, how have the fault lines become hardened, what does it mean to create a conversation that focuses on ethics of justice and change?”