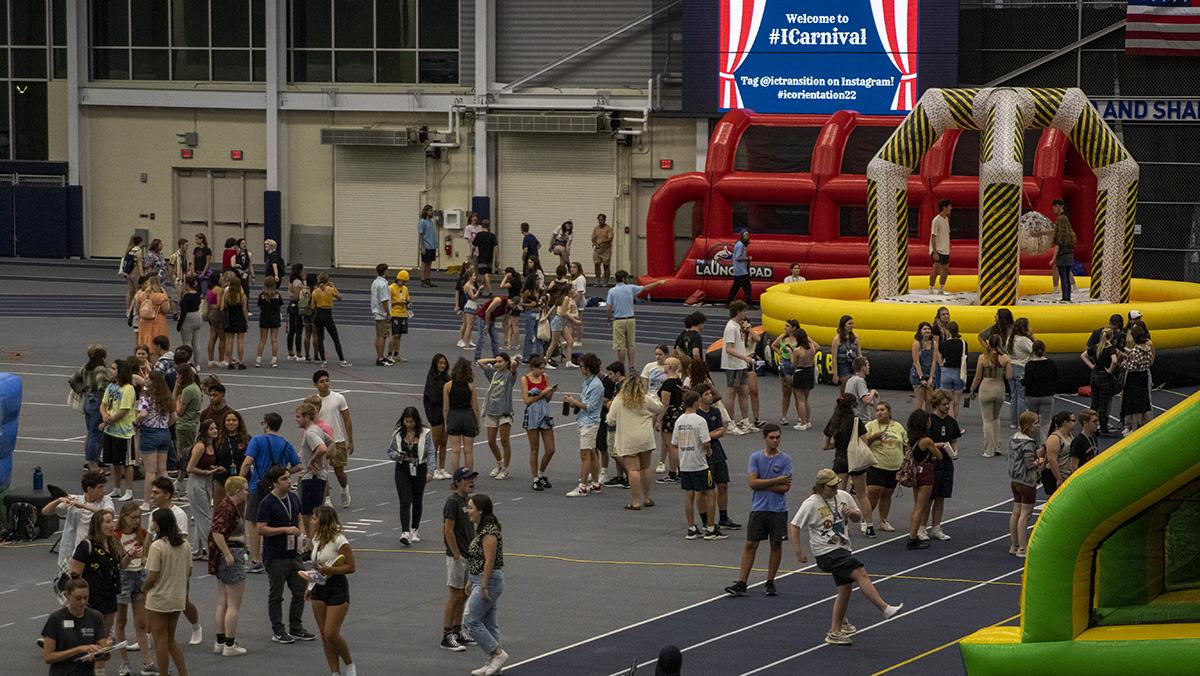 Maggie Bryan/The Ithacan
Orientation for freshmen and transfer students was held from Aug. 16 to 21, with an option for students to arrive Aug. 14 and participate in Jumpstart programs. Orientation is organized by the Office of New Student and Transition Programs, while Jumpstart is organized by the Office of Student Engagement.
By Clare Shanahan — Assistant News Editor
Published: August 24, 2022

Freshmen and transfer students flooded onto the Ithaca College campus throughout the week of Aug. 15 to attend pre-semester programming like Jumpstart and New Student Orientation both of which had greater engagement than previous years.

Michele Lenhart, director of the Office of Student Engagement, said in an email that the number of programs offered this year allowed for many more Jumpstart participants than in previous years. Lenhart said that in 2021, there were nine Jumpstart programs offered, and in the years prior to the COVID-19 pandemic, there were only four programs offered, causing many applicants to be turned away due to limited slots. This year, 366 students were able to participate in Jumpstart.

There were 14 Jumpstart programs offered for Fall 2022 and each focused on a different topic, including outdoor adventures, community engagement, wellness, and comedy. According to the college’s website, the programs are designed to introduce students to each other and the Ithaca community prior to the arrival of other students. Some programs were open to all freshman and transfer students, while others targeted certain groups, like LGBTQ+ students, first-generation college students and Jewish students.

“The programs that feature an outdoor element seem to be quite popular, with lots of students checking off Ithaca is Gorges, Rowing and Roasting, and Lead-In as top picks,” Lenhart said in an email. “The two art and theater themed programs are also quite popular.”

Freshman Caitlyn Wagner said they participated in the Big Gay Scavenger Hunt Jumpstart program because they wanted to be immersed in a community of LGBTQ+ individuals like themself, and wanted to get acclimated to campus while there were less people around.

“The first or second day — when people all brought out, like, pride merch, and then pride night during the beginning of orientation — it was the first time I ever saw anyone else besides me hold my pride flag,” Wagner said. “I’ve never seen anyone else hold it, which was such a cool experience.”

Wagner also said that they are very introverted and have social anxiety, so being able to experience campus events that were not overcrowded was an important part of the Jumpstart program for them. Wagner said the required freshman orientation activities were somewhat redundant, but they felt that the Jumpstart program itself gave them a good introduction to the college.

This year’s freshman orientation was five days long, but Doreen Hettich-Atkins, executive director of Student Affairs and Campus Life, said it has been different lengths in the past, such as three or seven days. She said that five days felt like a good length and orientation organizers worked hard to provide a variety of different activities throughout the week and during each day.

“Freshmen were super engaged in everything,” Hettich-Atkins said. “We closed events with people still at events. I was amazed at the turnout. I think the freshmen were really excited to be back in person and get engaged and get excited and get connected.”

The Jumpstart and orientation programs followed the college’s COVID-19 protocols for the 2022 academic year.

According to an email sent to the campus community July 27, Samm Swarts, assistant director of Emergency Preparedness and Response, said all new students were required to be fully vaccinated prior to returning to campus and take a COVID-19 test that showed negative results. Swarts said face coverings are optional for campus community members except for in healthcare settings around campus.

Wagner said that they were required to wear a mask on the bus during their Jumpstart program and felt that COVID-19 guidance did not take away from their programming or orientation activities.

“Everyone seemed super cooperative of it,” Wagner said, “Which is really nice and helps definitely put not only me but a bunch of other people at ease to kind of know that people are actually going to take things like this seriously and are gonna respect people’s wishes.”

Freshman Ana Bauroth said she feels that the current COVID-19 guidance is appropriate but hopes that if cases begin to multiply, the college is prepared to stop any outbreak quickly and effectively.

Lenhart said the new protocols improved Jumpstart by allowing for more events and trips to be incorporated into the programs and gave students better opportunities to engage with each other.

Hettich-Atkins said the relaxed COVID-19 protocols also created a better situation for first-year orientation, which was an important part of acclimating new students to the college.

Thompson said they found many parts of orientation redundant, with a lot of information like diversity, inclusion and consent being covered in modules students completed before arriving at the college.

“I understand that those topics are very important and should be talked about,” Thompson said. “So I could understand the meetings and all that other stuff, but to constantly talk about it all throughout the week is a little tiring.”

Bauroth said that while she enjoyed orientation and particularly appreciated the small group activities because they were more interactive than other events, she was somewhat surprised by the number of activities.

“I thought it was really good, a little overwhelming to be honest,” Bauroth said. “I thought it’d be like one or two days of activities, but it’s like the whole time. It was a good time but it was a long time.”