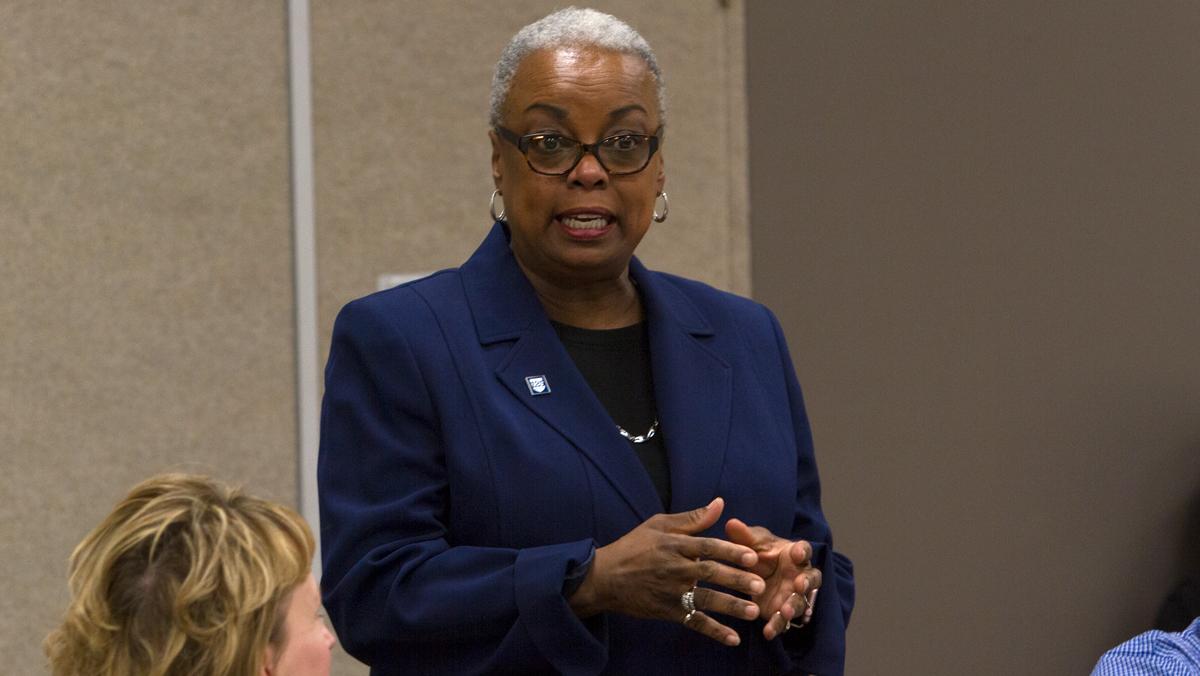 Collado and Cornish answered questions and concerns from council members. The council discussed the budget report, which was passed and approved to be sent to all faculty members. Nancy Pringle, senior vice president for the Division of Human and Legal Resources and general counsel, spoke at the meeting about the new data privacy policy and received faculty feedback. The council also recognized leaving council members, announced new council members and elected Faculty Council officers for the 2018–19 academic year.

Stanley Seltzer, council member and associate professor in the Department of Mathematics, asked Cornish how she defined shared governance.

Cornish said she believes shared governance is a partnership between the faculty and the board, which is facilitated by the administration.

“There’s been issues of trust here in the past few years,” she said. “With absent trust, shared governance cannot exist. And so it’s up to us not to rebuild but to build trust because we’re all getting to know one another.”

Paula Ioanide, council member and associate professor in the Center for the Study of Culture, Race and Ethnicity, said she hopes Cornish will follow through with her vision of transparency. She also said she believes that Cornish’s long–term plans will help the college grow. Cornish begins in her new role July 1.

“I feel that not only did we land exactly where we wanted in terms of our next provost, but also the process itself I thought really reflected the value of shared governance that many of you reflected to me as … being incredibly important to you,” she said.

Collado also thanked Linda Petrosino, interim provost and vice president for educational affairs, for her performance in the interim position and for her guidance and support. She will resume her former position as dean of the School of Health Sciences and Human Performance July 1.

The council also discussed the budget report and passed a motion to send it out to all faculty members. Tom Swensen, Faculty Council chair and professor and chair of the Department of Exercise and Sport Sciences, said class sizes are decreasing while the average discount for tuition is rising. He said the college has not yet met its goal for enrollment for Fall 2018. He said the goal for total enrollment is 5,719 students. Last year, total enrollment at the college was 6,103, according to the Office of Analytics and Institutional Research.

Collado said the college has most recently secured 92 percent of its goal for enrollment for the incoming class. She said she is confident in the college’s ability to balance the budget and manage debt.

“In terms of our debt, we are in relatively good conditions in terms of how our debt is set up relative to the rest of our cost and out revenue, and we’re just watching that really carefully,” she said.

Pringle also presented a draft of the new data privacy policy. She said the policy is designed to allow students, faculty and staff to have their preferred names and genders integrated into all of the electronic systems at the college.

Pringle asked council members to provide feedback on the policy, which she said she hopes to officially implement before the start of the 2018 fall semester.

Peyi Soyinka-Airewele, council member and professor and chair of the Department of Politics, said she thinks the policy should let the individual know about the time frame within which they should expect to have their chosen name or gender integrated into all systems at the college. She also said she thinks the policy should specify whether or not the individual should expect their name to be changed on all previous records.

Council members also discussed the complications that arise when students, faculty and staff may have to fill out paperwork that involves their legal names instead of their chosen names.

Ionade said this may come up with forms like the W-9, a tax form. She also said she hopes the student’s chosen name will not show up with their legal name in electronic systems as it will still let community members choose what name to call the student. She said this could open the door to microaggressions.

Chris McNamara, council member and clinical associate professor and clinical director in the Department of Physical Therapy, said similar complications could arise during background checks that physical therapy students go through to work with patients.

Swensen also spoke about a proposal made by the Academic Policy Committee(APC) proposing that the APC would no longer review individual courses but instead entire academic programs. The proposal would place course review in the hands of each school’s curriculum committee. The school curriculum committees would also determine whether there is course overlap. The proposal will be voted on at the May 17 meeting.

Council members also voted to table the Faculty-Staff Benefits Committee update until the next meeting.

The council also elected its officers for the next academic year. Swensen will remain the chair of Faculty Council. Jason Freitag, associate professor in the Department of History, will also remain the vice chair. Seltzer will remain the secretary.

Council members also toasted John Rosenthal, council member and professor in the Department of Mathematics, to honor him for his 47 years of teaching at the college and 12 years serving on Faculty Council. He is retiring at the end of this academic year.