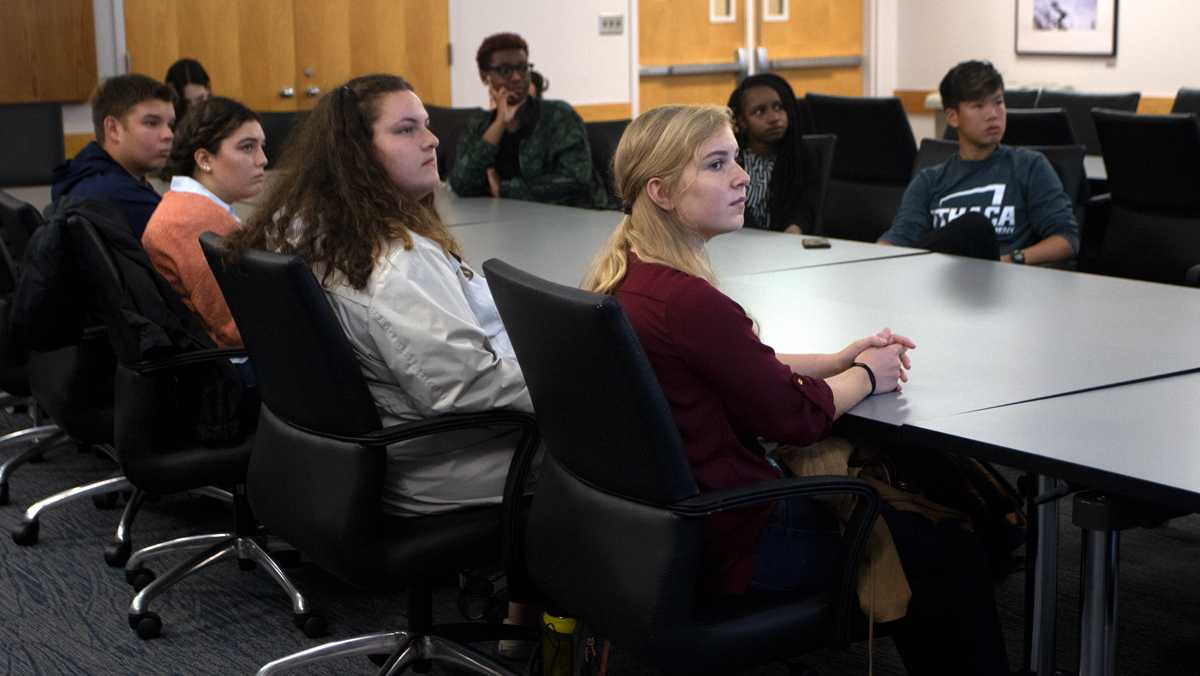 Maxine Hansford/The Ithacan
The event was held in the Taughannock Falls Room in Phillips Hall, at which nine students, all running unopposed, gave speeches about why they are eligible candidates for their respective positions on the SGC Senate.
By Alexis Manore — Contributing Writer
Published: September 12, 2018

The event was held in the Taughannock Falls Room in Phillips Hall, at which nine students, all running unopposed, gave speeches about why they are eligible candidates for their respective positions on the SGC Senate. There are currently 20 senate vacancies to be filled as well as the position of senate chair, which will not be filled during this election. The position of senate chair is elected by the Senate, usually during the final meeting of the previous spring semester. No one ran for the position during Spring 2018, and the executive board did not appoint a designee to fill the position, as is the specified course of action in the SGC Constitution.

Senior SGC President Alyse Harris led the presentations in the absence of the senate chair, the executive board member who usually runs SGC elections. Junior Farwa Shakeel, vice president of academic affairs, and senior Kylee Roberts, vice president of communications, were also in attendance and asked each candidate questions about their platforms, communication with constituents and time management.

Freshman Anna Costa is running for the Class of 2022 senate position. Costa emphasized her past student government experience and her plans to help freshmen adjust to college beyond the first semester. Freshman Reed Pollard is also running for the position but did not attend the meeting.

“I want to be there to answer any questions, just to be an outlet and a resource for my fellow classmates,” Costa said.

Freshman Abigail Murtha, who is also running unopposed for the School of Health Sciences and Human Performance senator, spoke about how she wants to help students transition to the demanding environments of college and their careers once they graduate.

Running as the sole candidate for the School of Music senate position is freshman Rebecca Emery. Emery said she would like to encourage bonding among the many music majors to familiarize the different students and faculty in the school.

“My platform is basically to connect all of the [music] majors,” Emery said. “I would really like to get to know not only the other students in the school but also the faculty.”

“I’d like to help all the international kids feel at home and adapt to the new situation they’re in,” Keralia said.

Sophomore Alex Perry, a member of the college’s women’s varsity golf team, is running unopposed for the position of varsity athlete senator. Perry addressed issues such as class scheduling conflicting with practices and the fact that attending away games is not counted as an excused absence.

Nishiura, who was a senator-at-large during Spring 2018, discussed his ideas on the allocation of funding for school organizations.

In February 2018, SGC used up all of its allocated funds for the 2017–18 academic year and was unable to provide funding for clubs until Fall 2018.

“I think that getting more access to more money to more clubs is a good thing for our organization,” Nishiura said. “I want to make sure that students and clubs have access to funding, and we don’t run out.”

Scaglione talked about how he wants to make sure the entire student body gets representation.

“I want to be able to represent all students and to be able to communicate with senators of different classes and different schools to make sure that everybody on campus is represented,” Scaglione said.

Voting is open from September 12 to September 14 and can be accessed through IC Engage.