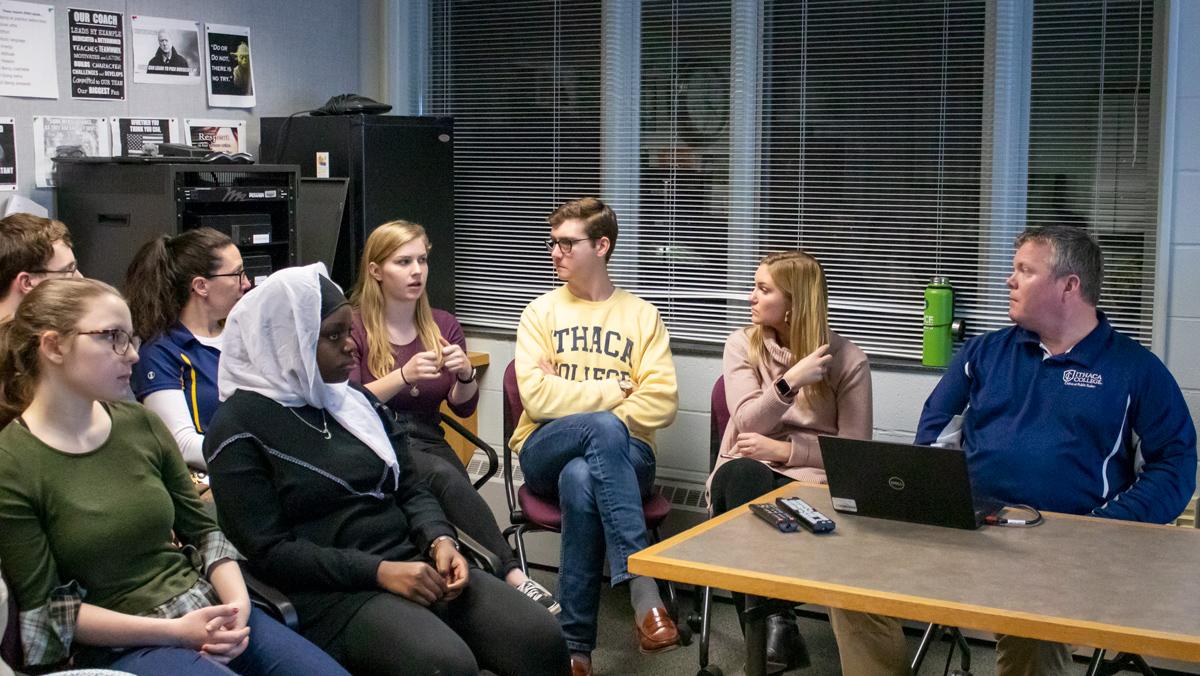 Caroline Brophy/The Ithacan
Bill Kerry, director of the Ithaca College Office of Public Safety and Emergency Management, said that development for the app began in Fall 2019 and that it should be completed during Spring 2020. He also said that in addition to the Public Safety office, Information Technology and the Office of College Communications helped to develop the app too.
By Sam Haut — Senior Writer
Published: February 5, 2020

Bill Kerry, director of the Ithaca College Office of Public Safety and Emergency Management, discussed the creation of a Public Safety app with the Student Governance Council on Feb. 3 at a meeting held in the Public Safety office.

Kerry said that development for the app began in Fall 2019 and that it should be completed during Spring 2020. He also said that in addition to the Public Safety office, Information Technology and the Office of College Communications helped to develop the app too.

Kerry said the app has not been finalized yet and still could change. He said the purpose of creating the app is to communicate high-level emergencies to the college community in a more efficient way than it currently does.

Kerry said the app can be used for both high-level emergencies but can also be used day to day.

“It’s about where can students go push a button, and, instead of having to Google search all these different things and wonder what’s out there at Ithaca College and have to find it on your own or something, this will actually have a list of numbers that you could call if you are in some form of crisis or if you just need support,” he said.

The app has six different menu items: inbox, support/crisis number, emergency resources, safety timer, Public Safety and local 911 centers. Kerry said the current design and names of the menu items of the app are still subject to change because the app is still in development.

While the app is not completed, there are some aspects to the various menus that have been developed. In the app, the inbox menu is for messages Public Safety sends to the campus community, similar to the email and text alerts it sends messages about school closings or suspicious persons. The support menu has a list of phone numbers students can call to get immediate help.

Junior Yetunde Smalls, student trustee to the Ithaca College Board of Trustees, said she thinks the support menu should include information on whether the sources provided are confidential or not.

The emergency resources menu provides a list of links to various crisis centers on campus, from Public Safety to the Center for LGBT Education, Outreach and Services to the Center for Counseling and Psychological Services.

The safety timer feature allows users to set someone as a “guardian” for a certain amount of time. The guardian will get text notifications reminding them to check to see if the user is all right.

The Public Safety menu item allows the user to immediately call the Public Safety office, and the local 911 menu calls the nearest 911 center, whether the user is in Ithaca or somewhere else in the country.

Kerry said the app can also work without Wi-Fi.

“This is actually Wi-Fi-enabled, so we actually could lose every cell tower in this area, and this is still going to work,” Kerry said. “It works off of what’s called push notification technology. And so let’s say we did have an extreme emergency on campus, and there’s a lot of stuff going on. This actually allows us to completely bypass the jamming of information so that we can still send information quickly.”

Kerry asked the SGC senators for feedback on possible changes that could be made to the app.

Junior Senate Chair Abigail Murtha asked if the safety timer section of the app could allow for calling Public Safety instead of texting a friend.

“My friends, they’re my roommates, go to bed at like 9 p.m., and I’m in the library until at least 11,” she said. “And so, if I was feeling unsafe, would there be a possibility for me to get a safety timer for that?”

Kerry said Public Safety is working on this, but it will not be a part of the initial rollout. He said it is because there is currently only one dispatcher.

Sophomore Hunter Simmons, Class of 2022 senator, said he thinks Public Safety should work with students to market the app.

“I recommend teaming up with [Integrated Marketing Communications], [Communication Management and Design] departments in the Park School,” He said. “I think it’d be really cool to have college students develop the marketing system, especially because the target audience is students.”

Junior Elijah Nishiura, vice president of campus affairs, asked Kerry if the app would allow people using the safety timer to know a user’s location through the app. Kerry said the app currently does not have a feature to share the location of a user’s phone directly with Public Safety, but, through the safety timer menu, a user can share their location with their guardian, who could in turn share it with Public Safety.

Freshman Austin Ruffino, senator for the School of Business, asked Kerry if a student’s parents would be able to access the app as well, especially for an event like commencement. Kerry said users need a college email to access the app. However, there will be a feature that allows parents to sign in as a guest.