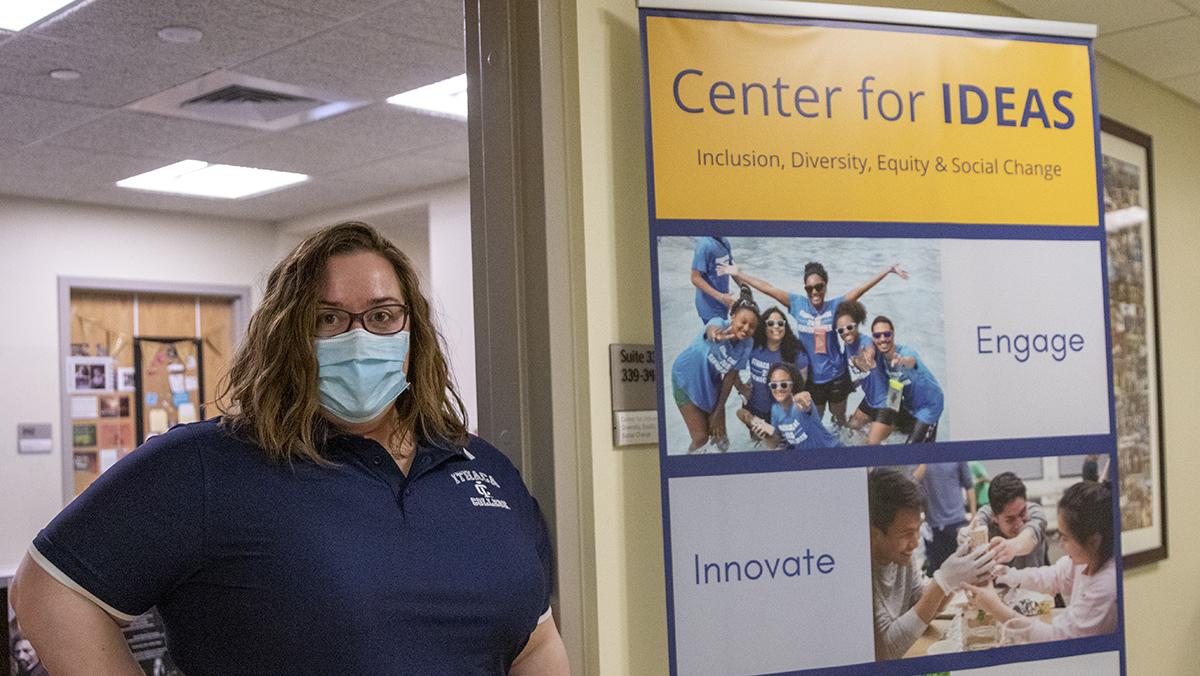 Brooke Vogel/The Ithacan
Angélica Carrington is the first woman to lead the Center for IDEAS since its founding in 2018 and the third permanent director in the center's history.
By Riley Garand — Contributing Writer
Published: February 8, 2022

Since January 2022, Angélica Carrington has been working as the new director for the Center for Inclusivity, Diversity, Equity and Social Change (IDEAS) at Ithaca College.

According to an announcement made by the college in November 2021, Carrington is the first woman to lead the Center for IDEAS since its founding in 2018 and the third permanent director in the center’s history. She succeeds RahK Lash, who was the former director for IDEAS who left the college in March 2021.

Contributing writer Riley Garand spoke to Carrington and learned more about her life and her new role at the Center for IDEAS.

Riley Garand: Can you tell me a little bit about yourself and your background?

Angélica Carrington: So I’m originally from Laredo. It’s a border city in South Texas. I’m Mexican American and so I grew up on the U.S. side, however, my mother’s family, they’re from Mexico … I went to college at Texas State University … I originally wanted to be a lawyer and then realized after I interned at one of the only Spanish-speaking firms in Austin it’s not what I wanted to do. So, I spoke to my mentors and they were like, “We have been telling you about the Student Affairs program” and I signed up the week it was due, made it work, got everything in, and it was the best decision I ever made.

RG: What gravitated you towards choosing IC and the Ithaca College community as well as the IC Center for IDEAS?

AC: Honestly this position is my dream job … I’ve heard great things about IC. I have had colleagues go to IC and enjoy it … It’s smaller, it’s more collaborative, it’s less siloed, which is very much my jam because I collaborate a lot … It just aligned with what I wanted to do, which is to create spaces that are more inclusive, advocate for services and resources that are more equitable for the students to navigate.

RG: Who were some of your biggest inspirations and influences?

AC: My person, who I don’t even know if they know that they influenced my life as a professional special in higher ed, is Michael Benitez Jr. He is the VP of D&I [Office of Diversity and Inclusion] at Metro State University of Denver…seeing his career jet after he finished his doctorate, hearing him speak, how he speaks, has always just been so influential … Then obviously other women of color that I have seen speak in different conferences such as Angela Davis, and — rest in peace — bell hooks. They kind of jetted me to want to be an advocate.

RG: What does it mean to be the director for the IC Center for IDEAS?

AC: Advocating and creating places for students has really been at the forefront of all the work I’ve done … Being the director for the Center of IDEAS is kind of the dream. Being in a space where I have some resources to get the work done, have a phenomenal team with me on this and amazing students who are a part of the office as well … [It’s] a place for students who want to find somewhere where they can feel validated when things aren’t going the way that they hoped at the institution. To feel heard.

RG: What are some of your goals within your new position in the next few months and in the long term?

AC: I am just trying to listen for now, my husband calls it a listening tour, which is very much so … It is like trying to piece together the previous leadership and the direction they were taking the space, trying to figure out why they went into the direction that they went and also listening to others on campus through leadership … I am very honest in listening to that because I have a lot of ideas. However, if I don’t listen to what the students actually want and need and what our collaborators see as opportunities, then I am not doing the space justice.