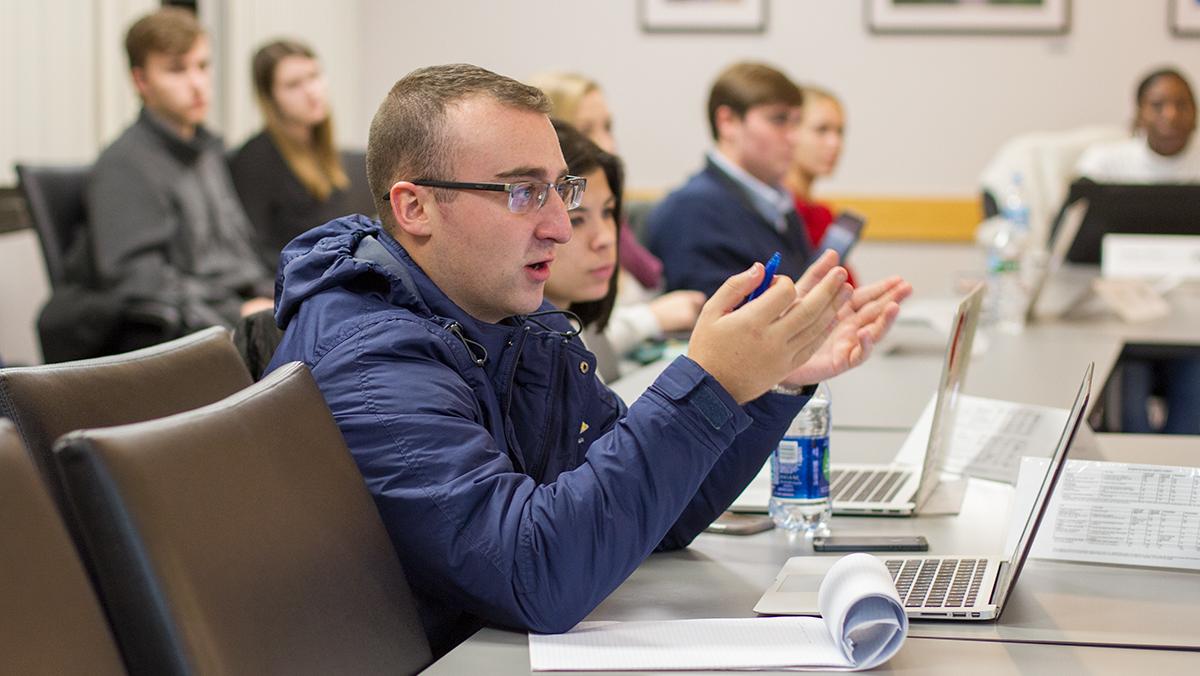 Fernando Ferraz/The Ithacan
Class of 2018 Senator Conor Friend has been a driving force in the Student Governance Council as he has either sponsored or cosponsored all of the four bills that the SGC passed so far this semester.
By Ryan King — Staff Writer
Published: February 25, 2017

The Ithaca College Student Governance Council has shown a significant uptick in legislation since last semester. The driving force behind this is Class of 2018 Senator Conor Friend. In the first four weeks of this semester — his first on the SGC — Friend has either sponsored or co-sponsored all four bills the SGC passed.

In addition to serving on the SGC, Friend also has many other college commitments. He is currently the college’s Reserve Officers’ Training Corps first sergeant for Alpha Company, a Model U.N. delegate and a politics and economics double major, and he has an 18-credit course load this semester.

Staff Writer Ryan King spoke with Friend about his productivity this semester and how he is able to balance all of his obligations at the college.

Ryan King: What do you think about student government in general — do you like the process? And does the SGC have enough power?

Conor Friend: The process is good — it’s different than other policy-focused groups that I have been a part of, but it’s a good process. It gets the job done. As far as the power goes, I’m not really sure how much more power it could have because, ultimately, it’s just a student body. If it decides to continue to work closely in conjunction with the administration and the faculty on campus, then it’s really up to the senators and the e-board to decide how much power and influence that it will have.

RK: What motivated you to produce all this legislation this semester, and is there more to come?

CF: Last semester, since it was my first semester being a senator, I was just feeling out how the whole process works and getting to be familiar with the Allocations Handbook because I dedicate a decent amount of time to [that committee]. And so now … after having understood and having become pretty familiar with [the legislative process, this semester] is going to be more about making positive changes to the allocations process. Because after all, we provide students with money to do what students want to do, and they should be able to completely understand the process. As it stands, the Allocations Handbook just barely does that, and I think it could be improved upon greatly.

RK: As a senator, how difficult is it to come up with legislative ideas, and how do you do it?

CF: I guess it depends on how involved senators choose to be. The more involved the senator is, the more likely they’ll be able to comprehend an issue on campus and propose a resolution to that issue. For me … just being on the committee when things come up that the handbook doesn’t provide guidance for or is very vague and unclear — that’s when I know that there needs to be a change. I’ll propose that change to [the] Allocations Committee, and if we deem that’s a good change, then we’ll bring it to the Senate, and the Senate will do what it will.

RK: What is your favorite and least favorite part of the SGC, and how do you think it could be better?

CF: My favorite part is SGC’s ability to effectively work with people across campus and to push administration, and various people working for them, to be better and to better what the school provides for students. What I would like to see more from SGC is senators’ involvement in actually trying to put together bills. Because to be as blunt as I can be, senators don’t do enough.

RK: How do you manage your time?

CF: I don’t even know. I couldn’t tell you. I guess there’s always time for things that I need to do, and if that requires me taking up most of my weekends to get work done, then that’s what needs to be done. During the week, it’s not easy to find all the time to get everything done. So I really need to delegate my time to what I see being most important for the next day and the next couple days, and I’ll do that first. And the things that are less important, I’ll do last, or I’ll try to get by without having to get [those things] done, and then I’ll get that done over the weekend or something.

RK: What are your goals in the future?

CF: For now, I am very focused on doing as well as I possibly can in the military. I’ll commission as a second lieutenant upon graduation, and I am going to have to lead young men and women into some stressful situations. So right now, focusing on doing the best I can for them is my No. 1 priority. But I think [my] long[–term] goal would be to definitely run for office and to serve for as many people as I can and to be a voice for them. That’s definitely the ultimate goal.

Having just one bill so far this semester reflects a significant drop in productivity for a group whose purpose is to represent the needs of the student body.