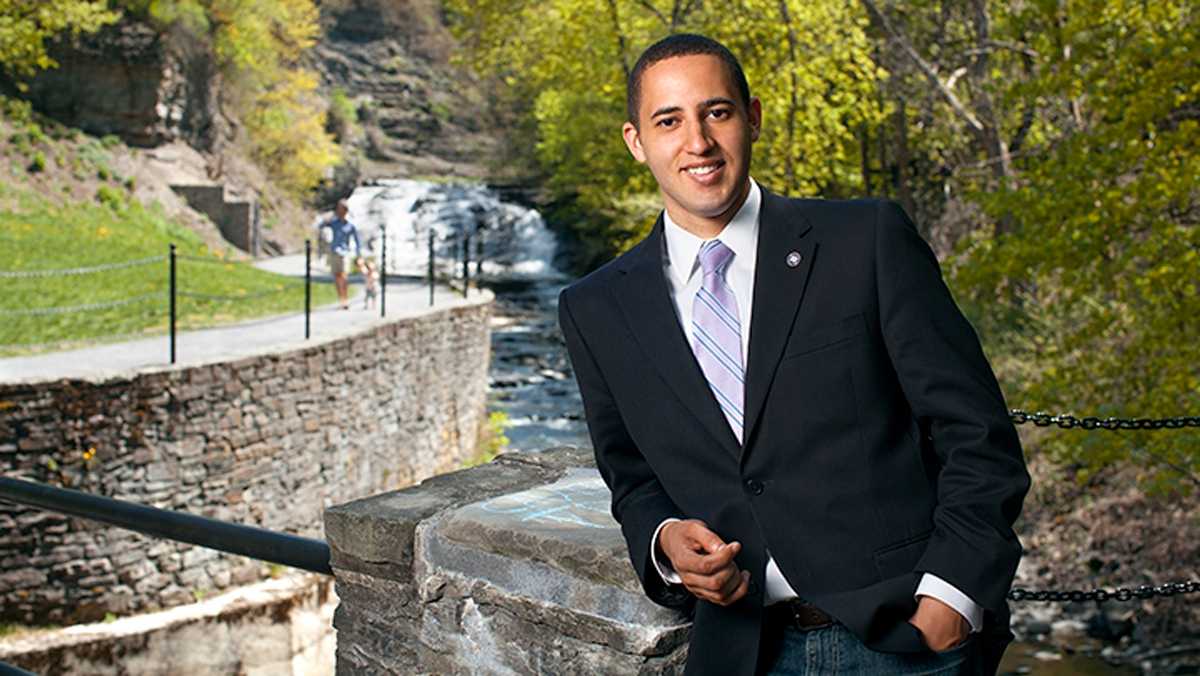 PHOTO COURTESY OF ITHACA MAYOR OFFICE
Svante Myrick, mayor of the City of Ithaca, talks about his accomplishments so far as mayor, why he is running for a third term and his thoughts on some of the city's top policy issues.
By Ryan King — Assistant News Editor
Published: March 26, 2019

Svante Myrick is finishing up his second term as mayor of Ithaca as one of the youngest mayors in the country. Myrick announced on Facebook on March 6 that he is running for a third term.

During his tenure as mayor, Myrick oversaw the reconstruction of The Commons, a decrease in city taxes, an increase in local housing and the completion of the Cayuga Waterfront Trail. In February of 2016, he gained national attention for his proposal to create a heroin injection facility in Ithaca, in which addicts could receive supervised injections. The proposal has not been implemented because it is currently against state law.

Myrick said if he gets a third term, he will continue to work on improving the city’s infrastructure, lowering the cost of housing, making childcare more affordable and improving the local economy.

Assistant News Editor Ryan King spoke with Myrick about why he was running for a third term, what he hopes to accomplish and his thoughts about some of the city’s top policy issues.

Ryan King: Why did you decide to run for re-election?

Svante Myrick: I just love the city. I love to serve the city. I think my service has made a difference so far, but there is so much more that I would like to do on behalf of all my friends and neighbors who live here. I think I am primed at this point in my life … [to] help us solve our biggest problems: the lack of affordable housing, the lack of quality housing, the need for improved infrastructure, the need to pave more streets more quickly to make our city more walkable and bikeable, to bring down the cost of childcare — these are all things that I hope to accomplish if I am able to earn four more years as mayor.

RK: I know you previously said on social media that taxes and rent are still too high. How would you address those issues?

SM: With taxes, there are several things that you need to do. One is you need to find ways to cut costs and work more efficiently. … In Ithaca, during the last five years, we’ve actually lowered taxes. The tax rate is lower now than when I took office. In fact, it’s lower now than it has been in a couple decades, but it is still too high. So we have to stay at it. There’s other things that we can do to increase revenue. Growth and development helps expand the tax base because there’s more people paying, so the tax per person can go down. … As far as rents go, it is a function of supply and demand. Right now, we don’t have nearly as much supply as we need to meet the demand. We have a lot of people being priced out because more people want to live in Ithaca than we have apartments. So, we need to build more first, and we need to build more subsidized housing.

RK: Going back to the tax issue, you previously proposed that Cornell University, which is tax exempt, should pay more taxes. Can you talk a little bit more about that idea and if it would apply to Ithaca College?

SM: Ithaca College is actually not inside the city, but it is inside the Town of Ithaca. I know that my friends in the Town of Ithaca government do wish Ithaca College would pay more, but that’s not really my fight. My fight is to see that Cornell University lives up to its reputation as a good neighbor and as a good citizen. And right now, I feel that the university is not doing that by not contributing to the roads, to the police, the fire department, even though they have more than a billion dollars worth of land, … and that’s not fair. We wouldn’t tolerate that from any other corporation, and Cornell is the largest corporation for miles and miles around.

RK: One of your signature issues was the heroin injection facility proposal. Can you talk about the status of that and some of the city’s other work on drug-related issues?

SM: We believe strongly that if we follow the lead of over a dozen other countries and 110 plus cities from around the world and build these overdose prevention sites, we will see a huge decrease in drug deaths and overdoses that we see in our community. … Unfortunately, it is not currently allowed in state law. We are waiting on the governor and are hoping very much that the governor will approve our request to open pilot sites here in Ithaca and in New York City, who’s also recently joined our coalition. … We are also focused on prevention, like how do we keep people off drugs in the first place? The answer is by keeping them in school, making sure they have jobs and making sure they have opportunities.

RK: The Ithaca Voice did a few pieces about how crime is falling in the city, but violent crime is rising. Why do you think that is and what is being done about this?

SM: Our goal is to eliminate crime. Not only is overall crime down, but calls to the police department are down because fewer folks are in need of relying on our services. I think that’s the result of two things: one is the result of our stronger safety net and two is the stronger economy and three is a great police department. I think people commit crimes when they are not feeling well, not doing well and haven’t had their needs met. I think if we continue doing what we’ve been doing, … building an economy that is inclusive and works, if we can focus on healthy people that are struggling with substance abuse and addiction, then we will see crime rates continue to go down.

RK: Do you think that you would ever be interested in pursuing a higher office, and, if so, could you guarantee the city that it’ll continue to have your full attention?

SM: I think the answer to both is yes. The truth is, the last seven years has been my privilege to be mayor. The last year, I spent more time out of town than any other previous year. That was in part because I launched an effort in a political action fund that would elect young progressive people to office all across the country, focusing in 2018 on the congressional midterms. And I did that because not only did it seem like the country needed it, but it also seemed like the City of Ithaca needed it. … And higher office, yeah maybe. … It does seem more of a possibility that I could one day go to Albany — I have really strong feelings about what they could be doing better to help serve the people of upstate New York. We’ll see if that ever pans out.