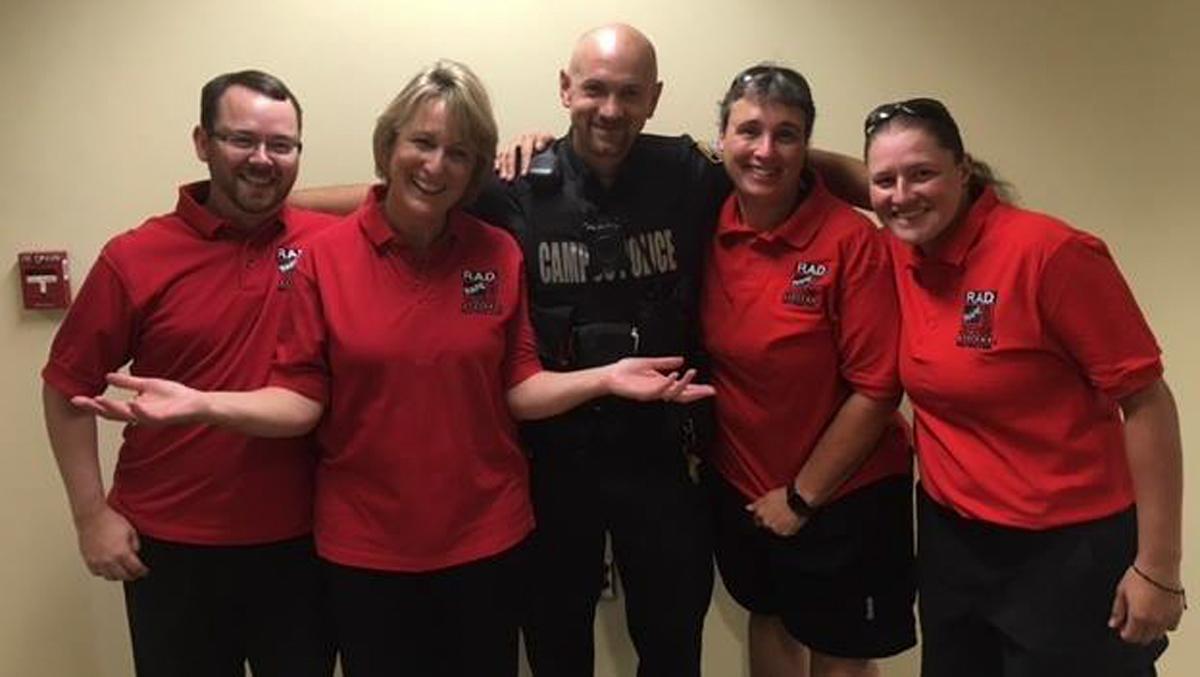 The program, now in its fourth consecutive year at the college, is a nationally developed initiative that teaches risk prevention, physical defense and how to develop self-reliance to empower female participants. It consists of 12 hours of training by certified instructors, spread over the course of four days.

Two coordinators of the program — Andrew Kosinuk, crime prevention and community event liaison, and Crystal Young, coordinator for administrative and operational support systems — said they are currently looking for ways to increase the program’s attendance.

The program has trained more than 900,000 women internationally in self-defense, and similar programs have been found to substantially lower the risk of sexual assault. At the college, there were four rapes reported in 2014, eight in 2015 and four in 2016. In response to the rise of reported rapes in 2015, Title IX Coordinator Tiffani Ziemann said she believes the rise in reports was due to increased awareness, rather than increased sexual assault.

Although R.A.D. was available for several years at the college directly following its establishment in 1991, Young said the program stopped for a few years after its instructors at the college moved to different institutions or departments. The sessions were reintroduced to the college community during the summer of 2015 after Kosinuk and Young completed their instructor training and became certified instructors in January of 2015.

The program currently advertises itself through Intercom, digital displays and in the Campus Center Dining Hall. Additionally, “sampler” sessions are given in residence halls, during which an instructor comes in to discuss the program. The coordinators are looking at other ways to advertise the program, including sending emails to alert potential registrants when sessions are open.

Young said the program is beginning to schedule its sessions more consistently because she believes a consistent schedule will help with attendance. She said the R.A.D. sessions typically have six to eight attendees. However, Kosinuk said their goal is to have about a dozen participants per session.

“We want people to have a good, energetic group of people to work with,” Kosinuk said. “But we also don’t want usually more than a dozen or so folks in a class, because then you start to diminish the amount of individual attention each of the participants can get.”

The first three days of the program are dedicated to classroom components of personal self-awareness, one’s surroundings and their practical application, while the fourth is for simulated training with mock aggressors.

On the fourth day, volunteers are given protective aggressor suits and act out scenarios with the program’s participants, in which participants then defend themselves using the moves and techniques they learned over the past three sessions.

While participants are able to choose to attend the optional fourth day at their own discretion, Young said usually all of them do.

Although separate sessions are held for students, staff and faculty, there are no changes in the curriculum.

Kosinuk said each session has the potential to be different in order to best educate and empower its students whose abilities can range from having no experience in self-defense to having years of background in martial arts.

Senior Elena Haskins, who attended the program Dec. 5–14 along with three other students, said she enjoyed the program’s techniques and how participants were educated on how to both analyze scenarios and situations and how to defend themselves with all parts of their body.

“We really focused on how to use your personal defense items,” Haskins said. “Like your body parts — like your head, your elbows, your hands, your arms, your legs, your knees — and trying to think about if you were in a situation where you got attacked; what you would use and how you can make it into second nature.”

Haskins said she registered for the program because she had no prior experience with martial arts and wanted to feel safer when she went out. She said her fellow participants had mostly the same skill level and motivations.

“Everyone seemed really enthusiastic and excited to learn,” Haskins said. “A lot of people, the people that were in there, chose to be there. And I think we all had very similar reasons for being there.”

Haskins said she would recommend self-defense classes to everyone.

“Everything I hoped to get out of it, I did,” Haskins said. “I highly encourage anyone to take a self-defense class. You are always going to walk away with something, regardless of how much experience you have.”

As warm batter bubbles in waffle-makers behind the counter top, the sweet aroma lifts into the air and permeates the upper level of the café, teasing mid-afternoon diners seated at tables where the artwork of sexual abuse survivors hangs above their heads.