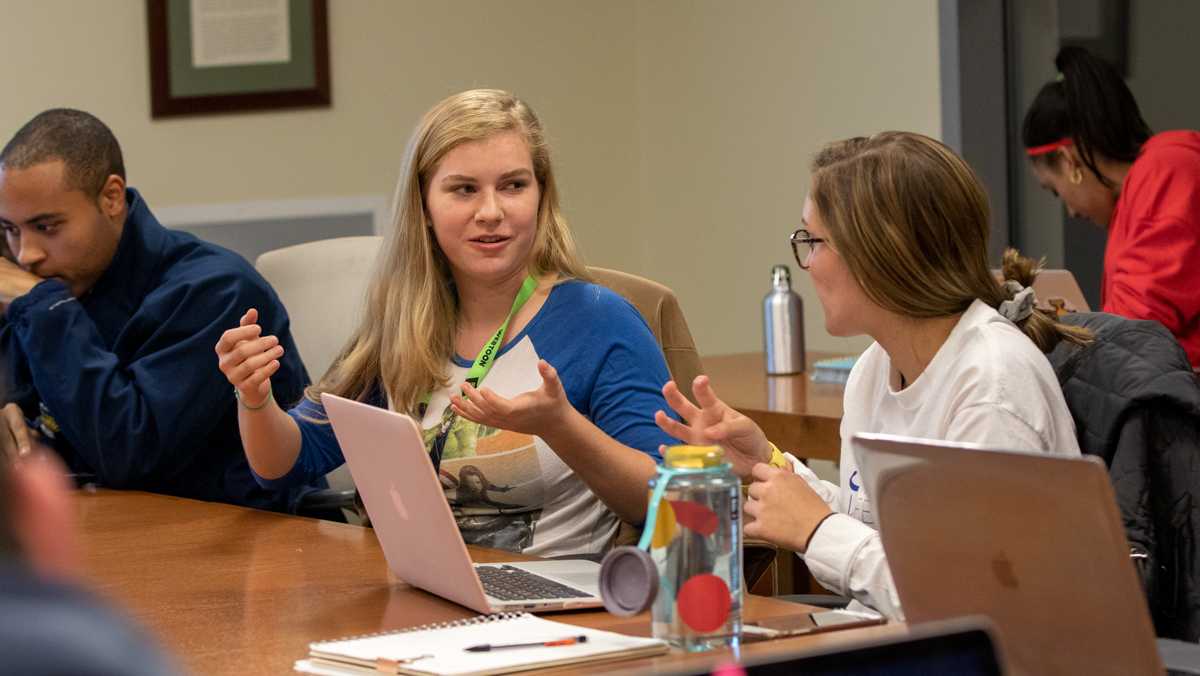 Hierald Osorto, director of religious and spiritual life at Ithaca College, spoke to the Student Governance Council about his future initiatives in its Nov. 5 meeting. The SGC also spoke about reforms to student meal plans and residence halls in the meeting.

Osorto gave a presentation to the SGC about his plans to hear the council’s thoughts on the direction he is taking his new role. Osorto said the Office of Religious and Spiritual Life’s mission is to create opportunities for students, faculty and staff to find a place they belong, create meaning through dialogue and work with other groups to create action.

He said he is currently developing new policies and expectations of religious and spiritual groups that are in a partnership with his office. Osorto said it is expected that the groups comply with the rules set by the college, especially those concerning prejudice and discrimination. Osorto is also planning to revise the funding structure in Muller Chapel.

Senior SGC President Alyse Harris said that a Jewish student involved in Hillel has a bill proposal that would address the fact that many events and classes have been scheduled on Jewish holidays and that she is looking for a senator to be a co-sponsor.

Osorto said he supports the ideas behind the bill that is planned to be brought to the SGC. He said it is important to recognize holidays of all religious communities on campus because celebrating them creates a sense of belonging. Osorto said Jewish students should not be forced to choose between their faith and academics.

“Part of our task is advocating for their needs so students don’t have to choose between their religious observance and a class, that there are processes in place that don’t allow that to happen,” Osorto said.

Osorto also discussed many other plans that he has for this office at the meeting. He said his office plans to partner with the Center for Counseling and Psychological Services to make a grief group that will meet in Muller Chapel to increase collaboration between his office and other offices on campus. Osorto said that the Office of Religious and Spiritual Life is also working with the National LGBTQ Task Force in March and that Rev. Naomi Washington-Leapheart will be coming to the college to facilitate conversation about the relationship between the LGBTQ community and religious groups.

In addition to Osorto’s presentation, the SGC spoke about making reforms to the student meal plans and residence halls.

Sophomore Allison Kelley, senator for the business school and a student representative on the Institutional Effectiveness and Budgets Committee, gathered opinions from the members of SGC about what can be fixed in meal plans and residence halls.

Kelley said she reached out to William Guerrero, vice president for finance and administration, to see if he had any topics he wanted the SGC’s opinion on, and he said via email that the committee is focusing on dining halls and meal plans: specifically, simplifying meal plans, addressing food insecurity and lowering the prices of the meal plans. She said he was looking for general opinions on housing reform as well.

Junior Hunter Flamm, senator for the School of Humanities and Sciences, said he has concerns about students who live off campus and do not have the meal plan.

“I know some people who live off campus and lose their meal plan and have a challenge planning how they’ll get their meals,” Flamm said.

Freshman Rebecca Emery, senator for the music school, said that the options for the meal plans — 10 meals per week, 14 meals per week or unlimited — are too limited and that there should be some choices in between.

Kelley said the committee is considering the creation of five and seven meal-a-week options.

Junior Devin Kasparian, senator for the Roy H. Park School of Communications, said he thought there should be some sort of plan that is only Bonus Bucks because many upperclassmen buy food at cafes on campus but rarely go to the dining halls.

Kelley switched topics from meal plan reform to student housing reform and said the IEBC knows about some of the problems in residence halls but has no specific plans to address them right now, such as the lack of gender-neutral bathrooms in some residence halls, an issue that Guerrero is also aware of, she said.

Kasparian also said he has experienced a lack of disability accommodations in the Lower Quads buildings.

Freshman Abigail Murtha, senator for the School of Health Sciences and Human Performance, said she lives in Towers and has concerns about the lock-out policy, especially because she has had experiences with being locked out of her room.

“Just as someone who lived in Lyon [Hall] for her first two years, the buildings are honestly just dingy,” Shakeel said. “The sizes of the rooms are nice, but it would be nice if they weren’t so gray and concrete and dingy.”