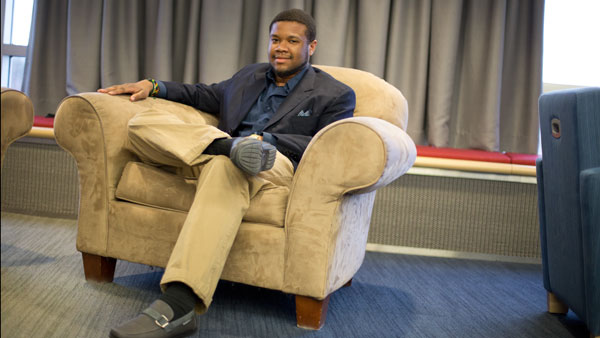 Tucker Mitchell/The Ithacan
Jonathon Cummings, class of 2015 senator, circulated a survey among Resident Assistants at the college from Feb. 6–16. He then presented the results to Bonnie Prunty, director of residential life.
By Kayla Dwyer — Assistant News Editor
Published: March 19, 2014

In light of the changes in residential life at Ithaca College, including the expansion of the First-Year Residential Experience housing and the introduction of the Integrative Core Curriculum, the Office of Residential Life has announced the creation of a Resident Assistant Advisory Council to address concerns among RAs.

In addition, Bonnie Prunty, director of residential life, and Associate Director Ronald Trunzo began offering “coffee talks” during the week before spring break for RAs to sign up and discuss how they are managing their jobs.

Jonathon Cummings, class of 2015 senator, circulated a survey among RAs at the college from Feb. 6–16 and received 50 responses. Presenting the results to Prunty is what contributed to the development of the council, Cummings said.

Cummings said the survey revealed that while RAs are not against the significant changes in their job responsibilities, they feel that they have not been given enough information and want more clarification on the ICC in particular.

“As someone who’s been an RA for two years … I can tell that there are a lot of growing pains,” Cummings said.

Sophomore Luke Heisinger, an RA in West Tower, said the underlying issue leading to the creation of the council is confusion surrounding the new FYRE programming. He said RAs feel programs were not discussed enough, as reflected by the survey.

Each housing cluster will have up to two RA representatives on the board who can bring forward issues they would like Residential Life to address, and the department can also bring proposals to the RA staff, Prunty said.

Sean Themea, a Boothroyd Hall RA, said he is grateful for the opportunity to address these difficulties while he serves as a representative on the advisory board.

“I think that there are some things in this pilot program that do need to be worked out, and that’s what we’re doing right now with the advisory council,” Themea said.

New responsibilities for RAs include organizing floor programs according to each of the six ICC themes and filling out communication logs with each resident in the FYRE. Prunty said the academic theme–based programming is a departure from the past model of floor-based programs in which, for example, an RA of a particular floor would meet only with the residents on that floor.

“I knew that there would be growing pains and was actually pleasantly surprised that, overall, the RA satisfaction with their positions was strong and positive,” Prunty said. “But it was clear from the comments that there were some areas we could focus on for improvement.”

Prunty presented the survey data at the Feb. 20 all-department staff meeting, the monthly debriefing held with all RAs and administration. There, she made the announcement of the establishment of the advisory board to close the communication gap.

Michael Falconieri, sophomore RA and representative from the West Tower staff, said at the first council meeting March 6, the 18 staff members brainstormed a list of concerns and resolved to narrow it down to a smaller list at their next meeting March 20.

“I think opening up a line of communication between the RAs and ResLife really, in general, is a victory,” Falconieri said.

Cummings and Falconieri met with Prunty on Feb. 27 during one of the first coffee talks. Cummings said they discussed their experiences working in the FYRE, such as filling out three communication logs — records of residents’ experiences based on detailed questionnaires — per student, per semester. He said he hopes to address how to reduce the excessive amount of logs.

Prunty said she began sending emails once a week before spring break to offer two opportunities per week for RAs to sign up to talk with Trunzo, capping it at six students per session, as long as students continue to sign up.

Though RAs have expressed concerns with a lack of preparation for the changes, Prunty said the RAs received information about the ICC and the FYRE during their fall training program and through a Sakai module over the summer.

“I think we’re all still left with questions since this is the first year of the program, but you’re not going to learn it all during orientation,” Themea said.

Junior Matthew Rich is an RA in the Outdoor Adventure Learning Community in Terrace 8, which is not part of the FYRE. He said one of the main issues non-FYRE RAs have is that they are responsible for more students but receive less funding for programming than FYRE RAs. This is an issue he thinks RAs of upperclassmen housing will address on the advisory board.

Chelsea Lanphear, a West Tower RA, said she acknowledges the confusion and roadblocks FYRE RAs are experiencing, but these difficulties are the result of the newness of the program.

“The RA Advisory Board and the professional staff in Residential Life and ICC are working on these issues as we speak,” she said. “The ICC is a growing program that will reform as we see what works and what doesn’t.”