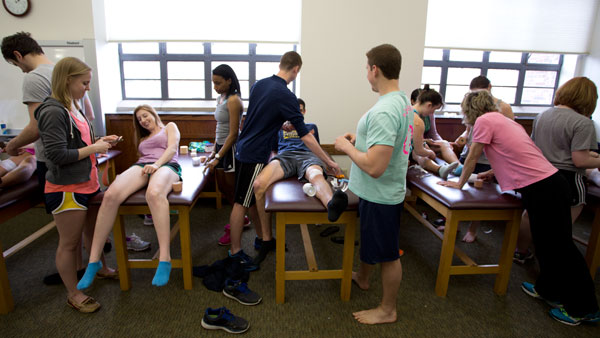 Tucker Mitchell/The Ithacan
Sixth-year physical therapy students practice on each other during the Prosthetics and Orthotics lab class on April 25 at the Rochester Center.
By Kayla Dwyer — Assistant News Editor
Published: April 30, 2014

After a more than 20-year relationship with the medical community in Rochester, N.Y., the Ithaca College physical therapy graduate program will see its last cohort of students conclude their collegiate careers at the Rochester Center.

As the college prepares to move its physical therapy program from Colgate Rochester Crozer Divinity School in Rochester, N.Y., to the Ithaca campus, physical therapy students from both campuses are considering the pros and cons of consolidation.

At the Rochester Center, students often worked with patients from Strong Memorial Hospital and Unity Hospital as part of their clinical learning experiences. Sixth-year Class Representative Elizabeth Previte — one of two students elected to represent student voices to faculty —  said these experiences, with the patients serving as case studies of injuries and anatomy, are aspects of the Rochester experience that she deems most valuable.

Despite the relocation to Ithaca, a less urban setting than Rochester, sixth-year Carly McDonald, another class representative, said the benefits of strong professional relationships could still be attainable for future graduate students at the college.

“That’s what’s going to happen in Ithaca,” she said. “They’ll find people that are willing to volunteer for labs and make the experience worthwhile.”

Helene Larin, chair of the Department of Physical Therapy, said the college has a relationship with Cayuga Medical Center which will allow for similar opportunities at the Ithaca campus.

To compensate for the facilities being lost in Rochester, the college is constructing several labs over the summer in time for the start of the Fall 2014 semester, Larin said. The Hill Center will house a new anatomy lab, which is currently under construction, that will serve physical therapy students during the required summer session that occurs after their junior year in the curriculum. This session is traditionally spent in Rochester. The possible uses for the lab, however, may also extend to interdisciplinary studies and other anthropological majors, she said.

Larin said sophisticated materials, such as force plates and camera systems from the Rochester Center, will be transported to the new movement-analysis lab — a research space for students to conduct clinical studies on gait, balance and cardiopulmonary skills, in the Center for Health Sciences. A new teaching lab, equipped with therapeutic equipment, will also be built in CHS in addition to the two labs that already exist there.

Fifth-year Heather Markus said she is concerned about the transition her class will experience as the first to experience a revised and relocated program.

“The hardest thing for my class is that we’re the guinea pigs, so we’re the first class that’s going to be back in Ithaca,” she said.

“We sit up here in some ways isolated from the Ithaca campus, and at the same time, deeply invested in the academic Rochester scholarly environment,” Nalette said.

Despite this faculty perspective, he said students were not influenced in any direction by faculty who expressed their opinions about the decision to close the center, which was announced June 19, 2013.

When the college hosted an open house for the Huron Consulting Group’s Effectiveness and Affordability Review recommendations Feb. 6, 2013, about 25 sixth-year physical therapy students from Rochester attended to voice their opposition to the consolidation of the program.

Larin said in response to the Huron recommendation in January 2013 to bring the Rochester facilities to Ithaca, the physical therapy department conducted a feasibility study that spring to see if it was a viable option, she said.

She said the day Rochon announced the decision to close the center, she and Linda Petrosino, dean of the School of Health Sciences and Human Performance, were in Rochester to inform faculty and staff. Previte said although the students received word via email, Petrosino paid another visit to Rochester in the fall to address student concerns.

“It was a very abrupt decision that we found out about, a very quick change,” Previte said. “[Her visit] definitely helped ease people’s minds a little bit.”

McDonald said faculty at Rochester have shifted the focus away from negative aspects of the closing and toward the positive ways in which the program will continue to grow.

“They’re trying to create more opportunity this year to go out on a good note and not dwell on what is happening and make it the best for us,” she said.

Larin said all seven faculty positions that exist at the Rochester Center will be filled in the fall at the Ithaca Campus, although some of the faculty in Rochester will not move to Ithaca, and the department is losing one administrative assistant position. She said the consolidation of the campuses will allow faculty to collaborate and communicate more efficiently with each other and with students, all of whom will have access to the same faculty.

“Now all six years — particularly the last three years, the professional years — will be able to benefit and engage into different research with faculty over a longer period of time,” Larin said.

Previte said spending their final year together on a distant campus creates a strong bonding experience for sixth-year students.

“The idea of 84 people moving to the same place to learn and do what they want to do for the rest of their lives and have fun doing it — I just love that aspect of it,” she said. “That just creates the ICPT family that not a lot of other schools get to have.”

McDonald said physical therapy clinicals run from May 19 to Aug. 8, which prevents graduates from walking at Commencement. In an effort to hold a final celebration for these students, McDonald and Previne are part of the committee to organize a closing ceremony inviting the entire class, faculty, family and friends to the Ithaca Campus on August 17.

As the class exits during the Rochester Center’s final year, Previte said they have accepted the reality and hope the college will provide the same quality of experiences it had in Rochester.

“It’s happening,” she said. “We’re more concerned now with what are they doing to make sure that this program is going to stay just as good as it is now.”