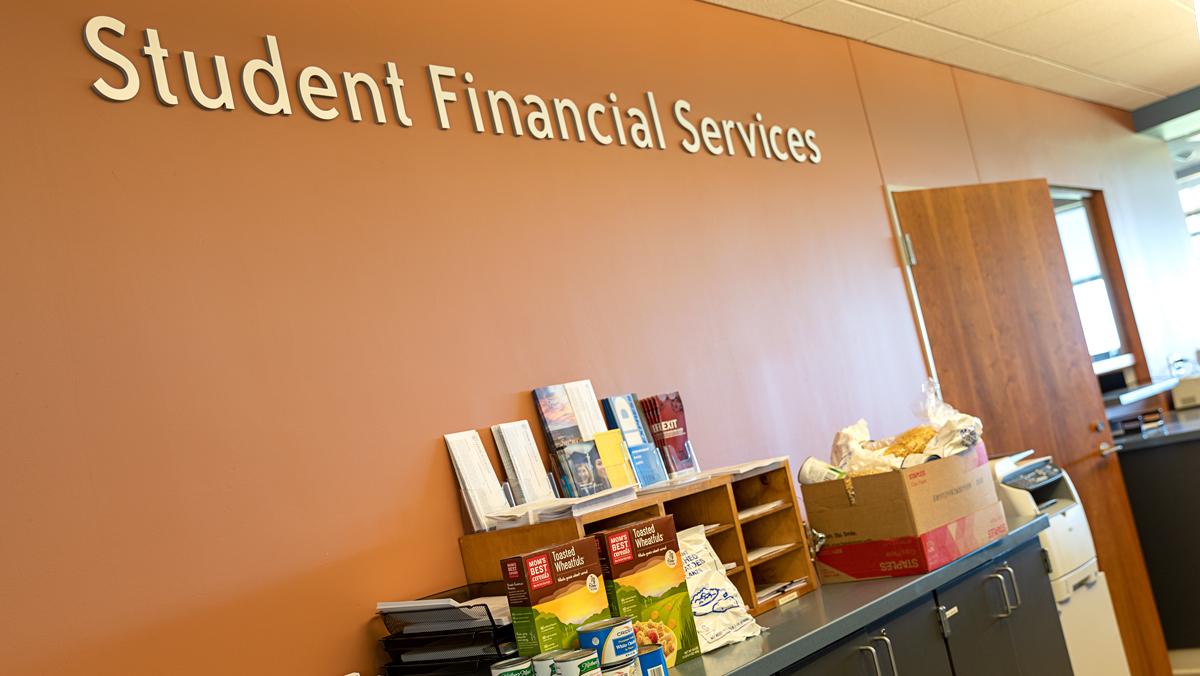 Sairam Reddy Potlapadu/The Ithacan
Shana Gore, executive director of Student Financial Services, said she thinks it is important for families and students to be aware of how much debt they take on. She also said that is part of the reason the college decided to freeze tuition for the 2021–22 academic year.
By Caitlin Holtzman — Assistant News Editor
Published: April 15, 2021

College students across the country could potentially have up to $50,000 of their student loan debt forgiven.

In a student press conference March 17, Sen. Chuck Schumer (D-NY) discussed a campaign he is working on with Sen. Elizabeth Warren (D-MA) to have President Joe Biden use his executive powers to forgive $50,000 of federal student loans for anyone with remaining debt. However, Biden has said he supports forgiving $10,000 in student debt. Schumer said 2.4 billion New Yorkers owe a total of $90 billion in federal student loans. Nationally, the average amount of student debt per borrower is $32,731.

“For far too many students, and so many graduates many years out of school, federal student loans and student loans, in general, are becoming a forever burden,” Schumer said.

As part of the American Rescue Plan, a $1.9 trillion plan approved by President Biden to provide relief to Americans during the COVID-19 pandemic, colleges are receiving federal aid. At least half of that money is supposed to go to students from the college in the form of financial aid, Schumer said. He said $2.6 billion was allocated for New York colleges.

Dave Maley, director of public relations for Ithaca College, said the college has not yet received the funds, but whatever is not allocated to students will be used to offset revenues that had decreased due to the pandemic. He said these anticipated revenues are tuition, room and board charges the college did not receive due to lower enrollment, low on-campus residency in Spring 2021 and no on-campus residency in Fall 2020. In a meeting with the Senior Leadership Team (SLT) and the Student Governance Council on Jan. 19, Laurie Koehler, vice president for marketing and enrollment strategy, said the college was expecting approximately 2,500 students to live on campus for Spring 2021. Normally, there are approximately 4,400 students who live on campus.

Schumer said there is $1.6 trillion of student debt in the U.S. Student debt is the second-highest form of debt in the U.S., falling behind mortgage debt, which sits at $10.31 trillion. College graduates might take low-paying jobs in an effort to start paying off loans as early as possible. People might also default on their loans. Defaulting happens when someone fails to pay their loans on time. This can lead to future difficulties when trying to buy a house or a car.Schumer said 28% of the wealth gap between Black and white Americans is caused by student debt. A study by Inside Higher Ed showed that Black people are more likely to struggle to pay off student debt than white people. Black people are also more likely to accumulate more student debt.

Schumer said that forgiving $50,000 of student loans could help stimulate the economy. Due to loan payments, people might not be able to buy things they want. Forgiving some student loan debt would put extra money in people’s pockets, potentially allowing them to eat at restaurants more, buy a new car or make other purchases they otherwise would not.

Shana Gore, executive director of Student Financial Services, said she thinks it is important for families and students to be aware of how much debt they take on. She also said that is part of the reason the college decided to freeze tuition for the 2021–22 academic year. Gore said approximately 90% of Ithaca College students receive some form of financial aid.

“Our announcement in December of 2020 to freeze our total cost at the current level, as well as keep individual student aid awards constant, was rooted in our deep commitment to keeping students at the center and eliminating barriers to student access and success,” Koehler said via email.

Gore said college is an investment that usually has a positive outcome as students leave college with a degree in a field they want to specialize in.

“While we definitely want everyone to keep their borrowing to the absolute minimum, it’s also not a bad investment,” she said. “I do think [loan forgiveness] would provide a lot of relief to students to have some amount of their debt forgiven.”

Gore said that due to the COVID-19 pandemic, the financial aid office has heard from more students and families about financial changes due to job losses. Gore said the college will have received three rounds of federal relief funding from the government once the funds from the American Rescue Plan go through. The first was from the Coronavirus Aid, Relief and Economic Security (CARES) Act. The college received $4,583,253 in the CARES Act. Gore said all the money allocated to students was distributed in Spring and Summer 2020. The second was from the Coronavirus Response and Relief Supplemental Appropriations (CRRSA) Act, from which the college received $6,732,724, and Gore said funds are currently being distributed to students and the money for students will have been distributed by the end of Spring 2021. The third is the American Rescue Plan, and the college has not received these funds yet.

Junior Meghan Marzella said that due to the COVID-19 pandemic, her father had to take a pay cut as well as take on an extra job. Marzella said she also had to take on an additional job at home in order to make money to pay for her tuition. Marzella said she had a $10,000 scholarship grant from the college that she has almost lost a couple of times due to her siblings graduating college. Due to her change in finances, the college determined her grant was no longer necessary as it seemed she could pay tuition without it.

“We really fought really hard to have the school reconsider taking my grant away, but they still decided to take it away, unfortunately,” she said.

Marzella said that if Schumer and Warren’s plan goes through, it would be a huge weight off of her shoulders. She said that currently, she owes approximately $40,000 in debt that will continue to grow with interest. In addition, Marzella said the loan forgiveness would also help her siblings.

“That would be huge,” she said. “That’s, just for my family, $150,000 that I’m pretty sure me and all my siblings would just be willing to just hand right over to our dad because he’s been so helpful in paying for college and helping us work out loans.”

Marzella also started a petition during Fall 2020 to try to get the college to lower tuition for the fall semester due to it being held remotely rather than in person. The petition was signed by 567 people last semester. She said she started the petition because students would not be using on-campus amenities.

She said there were times when she has considered working full time over going to college and getting her degree in writing, which she said is her passion.

“Every single day I’m like, ‘I could’ve been in and out of trade school by now, I could’ve learned to be an electrician or something and I could be making $80,000 a year right now,’” Marzella said.

Marzella said she believes college and getting her degree is worth it and she wants to be at school, but she said it is sad that she has to weigh her options and figure out what is best for her financially. However, she said the loan forgiveness would make pursuing her degree worth it as she would not have as much debt in the future.

“Any kind of help immediately reinforces the feeling of like, ‘OK, maybe this is worth it, maybe I can do this, maybe I can manage this debt and move forward with my passion,’” Marzella said.

Sophomore Mailli McCormack started a GoFundMe campaign Jan. 24 to help raise money for her outstanding balance at the college. She said she had to figure out her college finances herself, including filling out the Free Application for Student Aid (FAFSA) on her own. The FAFSA is a form students can fill out with information about their parent or guardian’s finances to determine how much federal financial aid they will receive.

“Everyone that said something to me or donated, it was so heartwarming it gives me chills,” she said.

McCormack said she took a leave of absence during Fall 2020 to figure out how to pay for college. She said that due to the COVID-19 pandemic, she lost both of her jobs. McCormack said that working with the college’s financial aid office was difficult at times, and she felt like there were a lot of bureaucratic roadblocks that affected her getting more help. She said that in addition to her federal subsidized and unsubsidized loans, she had to take out a private loan.

McCormack said she has been considering taking another leave of absence, but after hearing Schumer’s student debt forgiveness plan, she said it would relieve a lot of her current stress.

“I would actually feel like I could get a degree,” she said. “I could finish school and pay for it.”