SGA to initiate student vote of no confidence in Tom Rochon 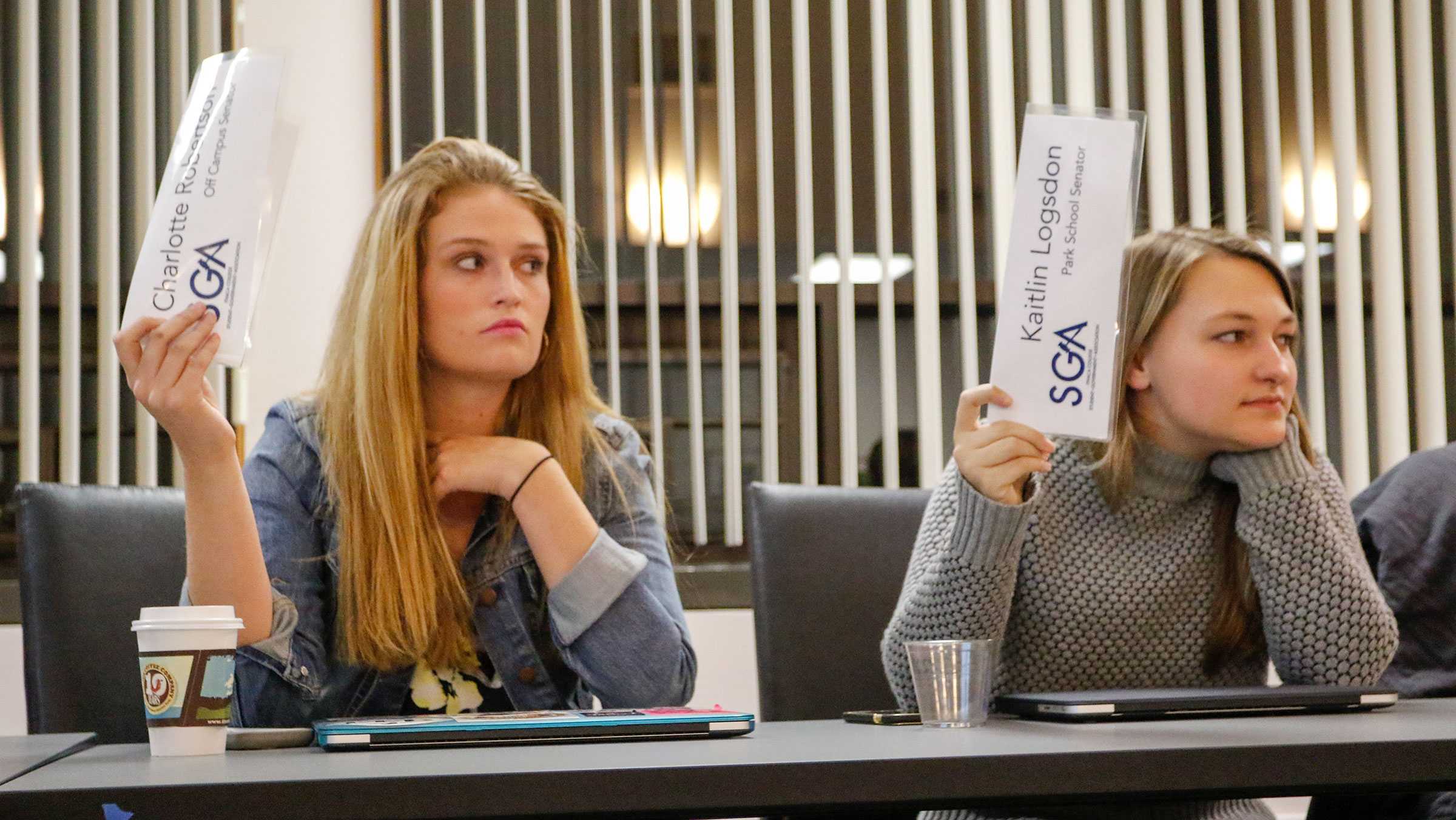 In response to recent campus protests, racial tensions and issues of exclusivity, the Ithaca College Student Government Association passed a bill Oct. 26 to initiate a student vote of no confidence regarding President Tom Rochon.

“Tom Rochon, no confidence,” has become the rallying cry of students on campus protesting the racial climate on campus and the administration’s handling of recent events, such as the AEPi fraternity’s planning a party with a racially-charged theme and a black female panelist being called a “savage” at the Blue Sky Reimagining Kick-Off event.

The bill defines a vote of no confidence as “an occasion when most of the members of a parliament or other organization say that they do not support the people in authority and that they disagree with their actions.”

The bill passed through the SGA’s senate unanimously, although with much discussion and questioning from members of the senate.

The vote of no confidence will be initiated by Nov. 4, said senior Dominick Recckio, president of the SGA and the sponsor of the bill. The vote will be emailed to every student and will be conducted through Qualtrics, an online survey software. The bill states that students will have 26 days to vote that they either have confidence in the leadership of Rochon or do not have confidence in his leadership. The results of the vote will then be released on Nov. 30 in an SGA meeting, as well as posted online and sent to the Ithaca College Board of Trustees.

The bill does not mean the SGA has no confidence in Rochon,it is just giving students the ability to express their opinion, said senior Matilda Thornton-Clark, Class of 2016 senator and a co-sponsor of the bill. However, Recckio said he has no confidence in President Rochon.

“As a student, as a member of this community, I don’t have confidence in Tom Rochon,” he said.

Recckio said if students vote that they have no confidence in Rochon, the board of trustees — which has the authority to remove the president — is under no obligation to take that vote into consideration.

“It’s a symbolic gesture, but it’s a damn strong one,” Recckio said.

“We’ve got faculty on our side, I believe we do have a lot of power in our hands and we can use it for good, especially because the chances of Tom [Rochon] being removed is not likely with just a student vote of no confidence,” Lucas said.

Lucas said as the student trustee she cannot have an opinion on the vote of no confidence.

A recommendation that the college’s faculty also move to initiate a vote of no confidence in Rochon was included in the bill.

Also contained within the SGA’s bill is a rundown of specific complaints, including inclusivity and representation in the college’s governing process as well as information about the recent campus protests regarding the college’s racial climate.

Recckio said the SGA plans to keep the survey unbiased and his vision of the way the vote of no confidence will be presented includes listing the duties under Rochon’s purview and then asking whether students have confidence in Rochon’s ability to perform these duties.

Recckio said he anticipates participation in the vote will be high.

“We’re at a very interesting place in time where I think that the engagement is going to be natural,” Recckio said.

The bill prompted a thorough discussion within the SGA senate before its passage.

Junior Kaitlin Logsdon, senator for the Roy H. Park School of Communications, said in previous years the SGA has worked hard to maintain a positive relationship with the administration and that passing the vote of no confidence bill might jeopardize that relationship.

However, she said given the recent rallies on campus, actions of the student body, the clear way forward is to have a vote of no confidence.

“I feel like by not voting for this, that I would be silencing some of the voices that I’m here to represent,” Logsdon said.

Sophomore Jonathan Couce, senator-at-large, said with all the problems on campus, having a vote of no confidence is a necessary step.

“I really think that it’s time, after hearing about experiences from alumni who graduated recently and upperclassman students, such as seniors and juniors, that this has been an ongoing problem where it’s just been continuous talk, talk, talk, and there’s really never been any action,” Couce said.

Given the recent campus events, Recckio said he feels a vote on the students’ confidence in Rochon as the leader of the college would send a clear message.

“I think a vote of no confidence is a really, really serious statement to say we have no confidence in this leadership leading us forward in the areas that are identified under the president’s duties,” Recckio said.

In a previous version of this article it said “Lucas said it’s important for students to ally themselves with faculty on the issue of the no confidence vote.” This has been removed and clarified to show that she has no official opinion on the issue.