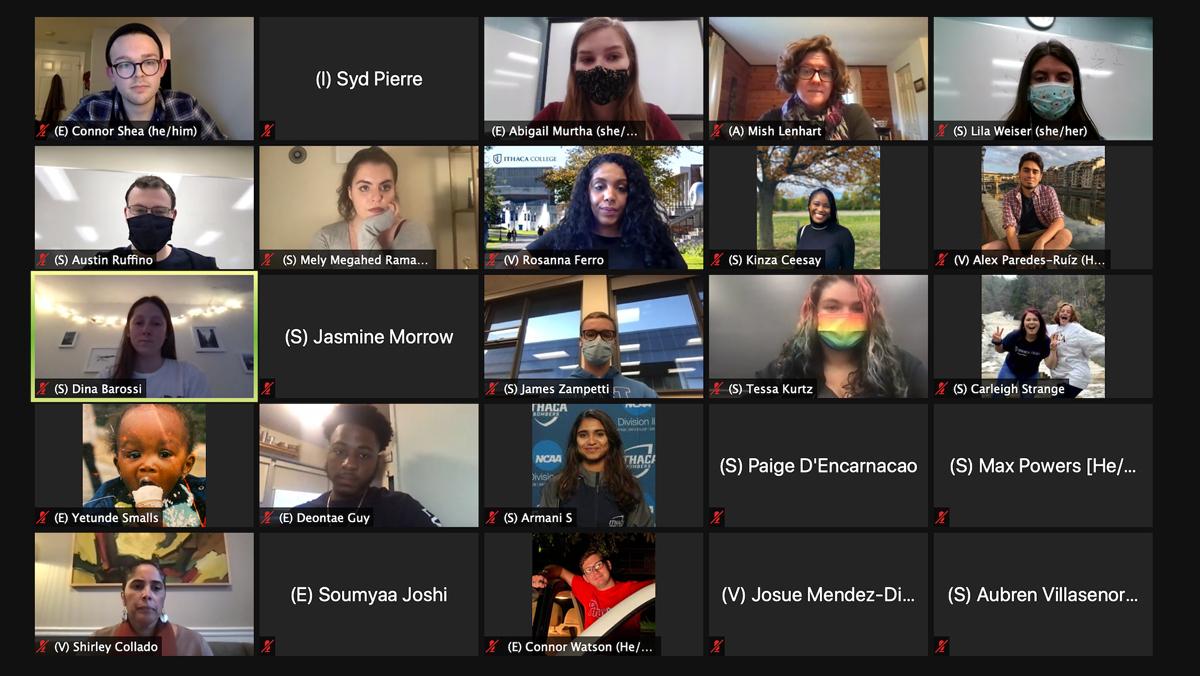 The Ithaca College Student Governance Council (SGC) held a discussion surrounding the violence toward the Black, Indigenous and people of color (BIPOC) community and the Asian Americans and Pacific Islander (APPI) community at its April 19 meeting.

The SGC held an open discussion for campus community members during its community session portion of the meeting. It also met with President Shirley M. Collado and Rosanna Ferro, vice president for student affairs and campus life, to discuss Fall 2021, and passed one bill at its meeting.

Senior Abigail Murtha, senate chair, said the violence against communities of color is happening not just across the country, but also at the college.

“I myself have talked about this with specific members of the community, and they’ve honestly been shocked to hear that it does happen on our campus,” Murtha said. “And that’s just pretty alarming because it is happening all around us, in [the] Park school, in the musical theater department, but also everywhere on campus.”

Senior Yetunde Smalls, vice president of campus affairs, said she would like to see the SGC create legislation based on the webinar it held with the Students of Color Coalition (SOCC) in the fall semester.

Sophomore Paige D’Encarnacao, Class of 2023 senator, said she is the only Asian person in some of her courses and feels hurt when her professors do not acknowledge what is happening in the world.

“Even though there is one per person of color, I still think that professors should be saying these things — even if there’s no people of color — in their classrooms,” D’Encarnacao said. “Because these issues on TV, on the news and in the world were affecting me, and were affecting my studies … I just wished that they kind of understood what some students are going through … and supported a little bit more, rather than nothing.”

Senior Alex Paredes-Ruiz, co-chair of SOCC, brought up a racial and political trauma initiative created by the University of California San Francisco as an example of an institutional plan that Ithaca College could follow. The protocol details points of contact, an initiation timeline following regional, national or sociopolitical trauma, a 24-hour communication response plan and a post-protocol monitoring timeline.

The SGC also spoke with Collado and Ferro about COVID-19 protocols for Fall 2021 and student involvement in the Academic Program Prioritization (APP) process.

Ferro said having more in-person instruction in the fall would depend on multiple factors, including vaccination rates and national guidelines.

“If, let’s say, even though we’re vaccinated and we’re in a good place, but there’s some other things happening, we’re going to take a measured approach similar to what we did with this semester,” Ferro said. “We might start a little bit more restrictive, just to make sure that we get the campus back and that we’re safe, and then loosen up as things happen.”

D’Encarnacao asked if the administration had any plans to form a group of Senior Leadership Team (SLT) members and students of color to work on statements released in the future regarding events occurring across the county. She said she was disappointed with the statement the college released following the March 16 mass shooting where six victims were Asian women.

Collado said the statement was updated based on the feedback she had received.

She added that the college does not have a group or plans to create a group to write statements, but said the SLT is always open to feedback.

Collado made a statement to the college community April 20 following the conviction of Derek Chauvin for murdering George Floyd. Chauvin was found guilty of second-degree unintentional murder, third-degree murder and second-degree manslaughter.

“This conviction cannot erase the sadness, pain, and anger of George Floyd’s needless death — or even begin to alleviate our outrage at the recent killings of Daunte Wright and Adam Toledo,” Collado said in the statement. “Nor can it erase the recent acts of hatred and violence directed at Black, AAPI, Sikh, and Latinx communities, or our nation’s appalling history of persecution and discrimination related to race, ethnicity, gender, LGBTQ+ status, and religion. While it is easy to become numbed by the relentlessness of this violence, we must never become complacent.”

Junior Sebastian Chavez, SOCC senator, asked about representation for students of color regarding executive decisions made at the college.

“Where do these students fit in in these executive decisions?” Chavez asked. “Because we always feel like we’re getting the end of the stick. We’re always hearing about these decisions that are being made without any of our constituents or anything.”

Collado said she has received questions regarding the APP process and how community members could get involved in the next stages of reorganization. She said the executive decisions are happening at the departmental level with deans and faculty members.

“Those are not decisions made by the administration,” Collado said. “They’re owned by the faculty, voted on by the faculty, and we can advise. And I think in terms of representation, I think the Senior Leadership Team is very clear, especially the provost as the chief academic officer, about how important, what you’re saying Sebastian, is to us, as a team, when we think about the BIPOC experience in the curriculum and in the classroom. That’s the most organic and powerful space where that can take place.”

Ferro said she does not like to generalize the experiences of certain groups, so she said it would be helpful to know more specific experiences students have outside of the classroom.

“I think there are some systemic things we need to address still being a predominantly white institution,” Ferro said. “They take a little bit more time, but it’s not an excuse for not addressing it, and so I think part of it is having those conversations.”

The SGC also passed the Allocations Handbook Amendment with a vote of 16–0 with no abstentions. Ruffino said the amendment would take past amendments made to the handbook over the semester and make them permanent.

“Even though we are hoping that we’ll have a pretty thorough in-person semester next semester, a lot of things that student organizations would normally do are still going to be limited based off of COVID guidelines,” Ruffino said. “So we’re going to continue to fund travel registration fees and continue to fund prizes for programming events to try to increase student engagement.”