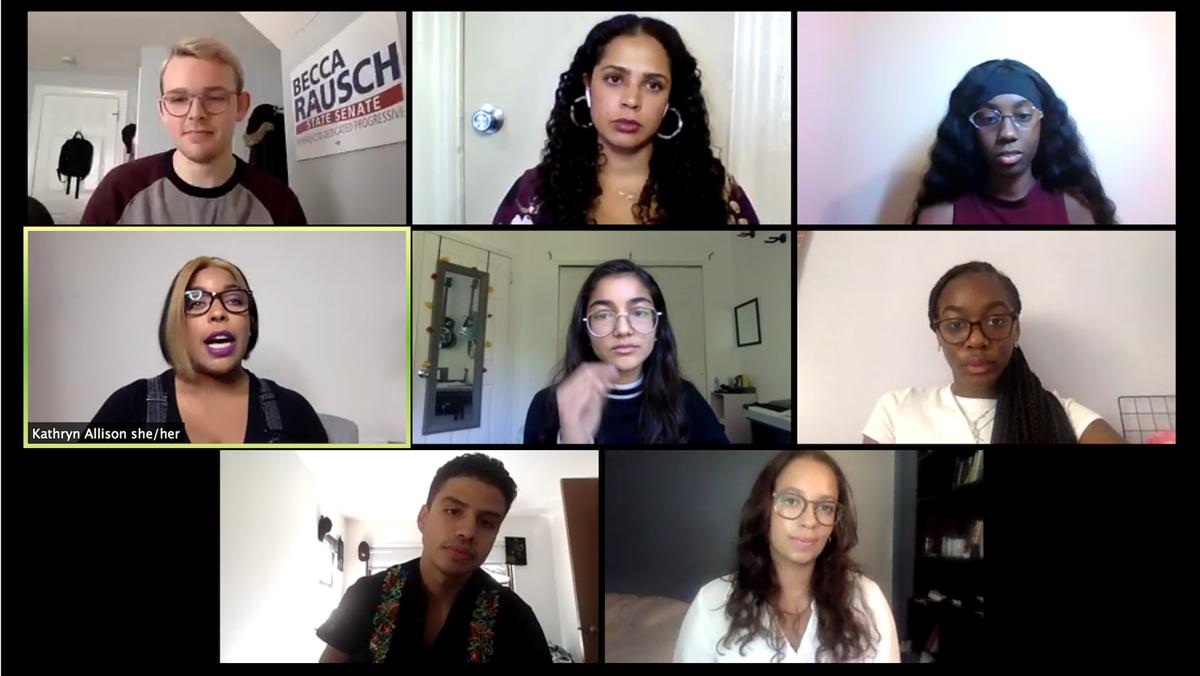 Courtesy of SGC and SOCC
The Ithaca College Student Governance Council partnered with the Students of Color Coalition (SOCC) to host the Stand for Justice webinar
By Syd Pierre — Staff Writer
Published: October 7, 2020

The Ithaca College Student Governance Council partnered with the Students of Color Coalition (SOCC) to host the Stand for Justice webinar Oct. 6 to discuss ways to address racism at the college, placing an emphasis on anti-racist curricula and diversity and inclusion.

The panelists included juniors Jordin Price, community chair liaison for Sister2Sister; Jessica Brock, co-president of Black Artists United (BAU); and Sebastian Chavez, SOCC senator for the SGC; and sophomore Soumyaa Joshi, vice president of academic affairs for the SGC. Alumni and members of the college’s Department of Theatre Arts Black, Indigenous and People of Color (ICTA BIPOC); Kathryn Allison ’14, managing director of ICTA BIPOC; and Maggie Thompson ’15 and Hannah Rose Guillory ’12, co-founders of ICTA BIPOC, also spoke about solutions and strategies to create a more equitable community on campus. Over 80 people attended the webinar, according to the SGC.

Senior Connor Shea, SGC president, facilitated the conversation and said that the webinar is the next step following the #StandForJustice statement Chavez and the SGC released in June.

“This statement acknowledges the responsibility we have as members of higher education to dismantle systems of oppression that exists within our college,” Shea said. “Along with the novel coronavirus, our nation is facing another global pandemic — racism.”

There has been a history of racist incidents at the college. Some high-profile cases include a racially charged incident that occurred in a theater class in November 2019 where Anne Hamilton, interim lecturer in the Department of Theatre Arts, asked students to write racial slurs on a whiteboard, and in December 2018, a student received backlash after using a racial slur in a video posted to Snapchat. Tom Rochon, former president of the college, stepped down in July 2017 following protests led by the group POC at IC and votes of no confidence from both faculty and students. POC at IC was created in 2015 following racist incidents that occurred while Rochon was president.

Chavez said that the goal of the webinar was to provide goals and strategies that people of color want to see implemented at the college. Price said that she wanted to see more mentors on campus and in classrooms for students of color.

“These mentors will be serving the purpose of helping students adjust to their environment, learning to unapologetically take up space, networking and helping them utilize the tools around them,” Price said.

Brock said the BAU would like to see the college implement a system of accountability and communication. She said that she felt like the Bias Impact Reporting form has not been communicated well enough to students. The form was created in Fall 2018 for students, staff and faculty to report bias incidents. The role of the Bias Impact Resource Team, the group that addresses submitted reports of bias, is to track patterns of bias. The form is not a substitute for a formal complaint.

“I don’t believe [the diversity statement] holds a lot of actionable tactics to ensure the safety of our BIPOC students,” Brock said.

Brock said that she recommended adding a mandatory educational class on diversity at the college. While students must complete a diversity requirement as a part of their Integrative Core Curriculum (ICC) competencies, the requirement can be filled by taking classes that fit into their ICC themes and have diversity designations.

“Just like how the ICCs are mandatory, [the class] would also be beneficial in ensuring the students of Ithaca College are knowledgeable about the land we stand on and about the people who surround it,” Price said.

Joshi said she thinks that the student learning objectives for the ICC diversity requirements are not being met. She said this should be a priority during the changes that are being made to the ICC.

“Students are not gaining the education of diversity they need in order to expand our knowledge and understanding of matters of diversity, including but not limited to discrimination, microaggressions, anti-racism and various systems of inequality, alongside the history of the social injustices and their impact on marginalized communities,” Joshi said.

Allison, Thompson and Guillory spoke about their experiences creating and managing ICTA BIPOC. In July, ICTA BIPOC published a letter containing students’ accounts of racism within the Department of Theatre Arts and demanded the college address the history of racist incidents that faculty, staff and students have perpetuated.

Thompson said that the organization has approximately 100 members, which adds to the strength and diversity of the group.

“This has allowed us to examine a wide swath of experiences from IC students,” Thompson said. “Something that’s really important to our organization and that we’re working to strengthen is the relationship between past and present students.”

ICTA BIPOC received a response to its letter Sept. 25 from Melanie Stein, dean of the School of Humanities and Sciences, and Belisa González, director of the Center for the Study of Culture, Race and Ethnicity. The response regarded two of ICTA BIPOC’s demands and met ICTA BIPOC’s deadline of Oct. 1.

Chavez said that he was disappointed by the statement in goal six of the strategic plan, which states that the college aims to “become a national model for colleges committed to the values of diversity, equity and inclusion.”

Chavez said he proposed that the college’s Executive Board, the SGC and SOCC create a task force that will allow students of all backgrounds and majors to have opportunities to contribute toward developing increased solidarity at the college. Chavez also said he would like to see the Diversity Advocates of Park (DAP) program be elevated. DAP is a committee of students, faculty and staff who focus on improving diversity and inclusion within the Roy H. Park School of Communications.

“DAP can provide a whole new forefront for the Park School to create a diverse and inclusive education for all if we start communicating and start collaborating to uplift this program once again,” Chavez said.

“We’re talking about the safety of students in the classroom,” Thompson said. “And if a professor is refusing to prioritize the safety of their students of color, I would have serious doubts about that professor’s fitness for educating young people.”

Price said that students can be allies during the remote semester by having conversations and focusing on listening to students of color. She also emphasized that students should come to events that are open to the entire college, like the Stand for Justice webinar. Over the summer, the college also held a discussion about racism and violence against Black people in the United States and how the college community can support its Black students.