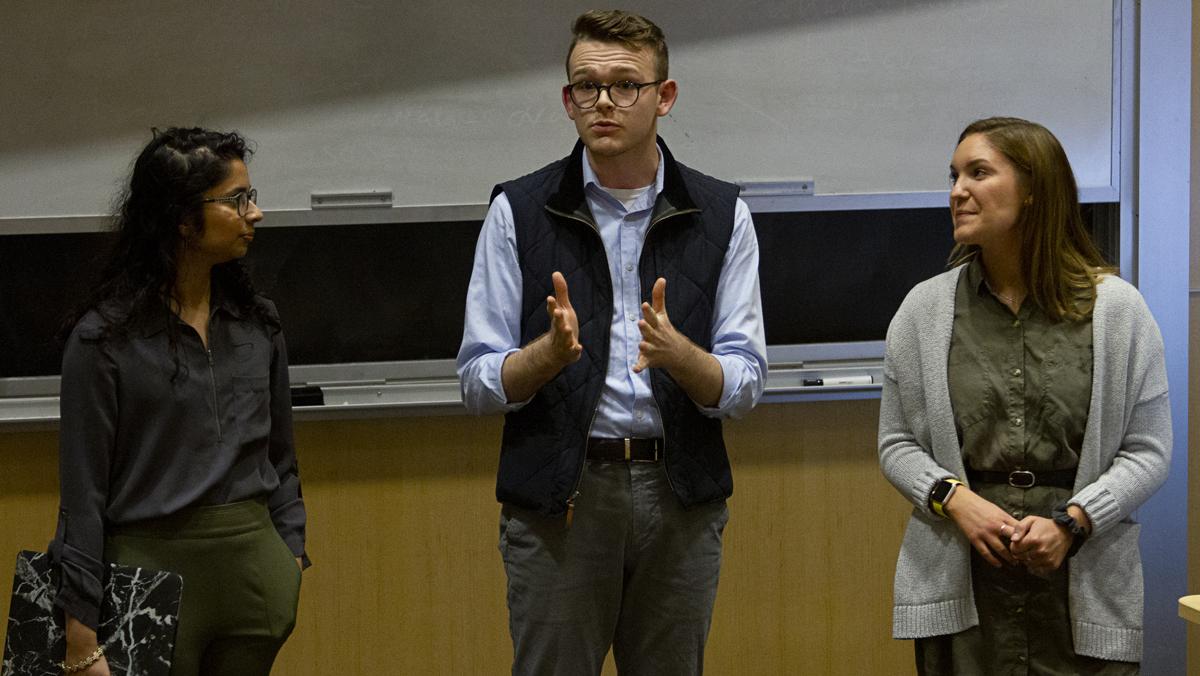 All three elections will be held from April 24 to 26 online at IC Engage. During the platform presentations, one executive board, or slate, presented its platform for the SGC executive board, two slates ran for Senior Class Council and eight students ran for SGC senate positions. Approximately 30 students attended the event, which was held in Textor 103.

Shakeel said IC Change’s goal is to maintain transparency and meaningful communication between SGC and the student body.

“We want to make sure that you all are getting the information you need,” Shakeel said. “This means sending out a newsletter regularly. This means setting up an open database on IC Engage where you can check out any initiatives and bills coming onto the floor.”

Kelley said she wants to redesign the Allocations Handbook, the set of rules that guide the SGC’s process for funding organizations on campus, to make it easier to read and more accessible to students.

“I want to redo the Allocations Handbook — right now, it’s clunky and real hard to read,” Kelley said. “Unless you know the right words to look for, you won’t be able to read it.”

Kelley said she also wants to redesign the SGC website.

Shea said he wants to increase communication between on-campus groups and organizations to gain support for one another.

“I’m looking for more interconnectivity between organizations and communities on campus,” Shea said. “So, how can we come together, help each other out, maybe even blend some programs, some concerts that we do together to increase attendance and support for each other.”

“We want to hear from the future seniors,” Picca said. “We really want them to feel like they’re shaping their own senior year and that they have a say.”

She said the slate wants to make sure senior year events are accessible for everyone, including making Senior Week more affordable. The current price of a Senior Week pass is $80.

Raiken said 2020’s Declassified Senior Year Survival Guide wants to concentrate on finding a way to communicate with the senior class, not only through the internet but through in-person communication.

“The biggest thing that we’re focusing on is developing a concise and consistent form of communication with our class,” Raiken said. “One thing we want to do, other than using online platforms, is focusing on face-to-face communication.”

She said the slate also wants to develop enjoyable fundraisers to raise money for Senior Week.

All of the SGC senate candidates are running for their positions unopposed.

Junior Hunter Flamm, current senator for the School of Humanities and Sciences, is running for his third re-election in the same position. Flamm said he wants to work with Melanie Stein, the new dean of H&S, to get the word out to students about his role as senator for H&S and the H&S committee that he proposed.

Freshman Abigail Murtha, current senator for the School of Health Sciences and Human Performance, is running for re-election. Murtha said she wants to focus on passing more bills and increase professional development for people of color, the LGBTQ community and women.

Sophomore Alexander Perry, the current varsity athlete senator, is also running for re-election. He said he wants to work on class schedules for athletes so they do not have to choose between attending classes or practices and games.

Sophomore Mayuri Perera is running for international senator. Perera said he wants to focus on improving housing for international students over breaks and increase advertisements for the Housing Offering a Multicultural Experience (HOME) program. The HOME program is a residential learning community and housing option available to students who are looking to expand their multicultural experiences.

Chavez is currently a member of the SGC senate as a senator-at-large. Chavez said he wants to focus on making the SGC a voice for the campus, specifically people of color.

Scaglione is currently the vice president of communications for the SGC but held the position of senator-at-large during Fall 2018. He said he wants to represent the entire student body through working with the administration to make change.

Powers is the current Residence Hall Association (RHA) representative. He said he wants to communicate with the entire student body, not just the RHA and the SGC.