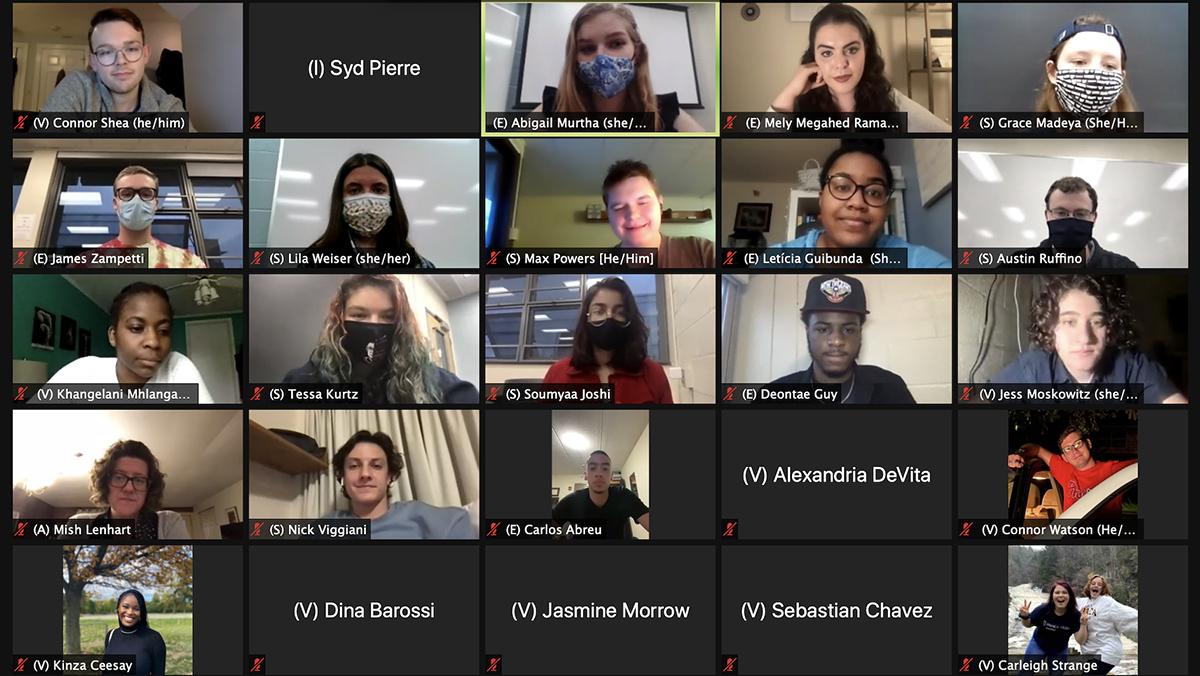 Courtesy of Student Governance Council
The meeting marked the transition between the 2020–21 and 2021–22 SGC executive boards and senates.
By Syd Pierre — Staff Writer
Published: May 4, 2021

At its final meeting of the spring semester and 2020–21 academic year, the Ithaca College Student Governance Council (SGC) confirmed the senate chair and two new senators and announced the chief of staff for the 2021–22 academic year.

The SGC confirmed four new members at its first meeting with its new executive board and senators. The meeting marked the transition between the 2020–21 and 2021–22 SGC executive boards and senates.

Sophomore Austin Ruffino and junior Max Powers both ran for the senate chair position. Ruffino was appointed as senate chair for the 2021–22 academic year with a vote of 5–0 with no abstentions. Ruffino ran on a platform that focused on his past experience with the SGC, including serving as a senator-at-large and assistant to the senate chair.

“I have a lot of big plans that I’d love to do on [Organizational Review Committee] in terms of making SGC as open and accessible as possible,” Ruffino said. “When it comes to running meetings and having SGC documentation available to the public, we need to make sure that everyone understands what’s going on and is really able to be involved with our campus community.”

Powers also ran on a platform that was centered on his previous work with the SGC. Powers has served as a senator-at-large, worked on the Appropriations Committee and Organizational Review Committee. He said he wanted to make the SGC more open to the student body by inviting more clubs and student organizations to meetings.

“I think it’s been amazing to see how other clubs work and see how we can give them a platform because that’s what our job is — to be the platform for all students to communicate,” Powers said.

The senate chair runs, coordinates and organizes SGC meetings. The SGC recently changed the way it appoints the senate chair. To be considered for the position, the senator must declare their candidacy and will be elected through the confirmation process, which is run by the senate. The executive board is prohibited from appointing or electing the senate chair, even in the event of a tie.

The SGC also confirmed freshman Jess Moskowitz as the Class of 2024 senator with a vote of 7–0 and no abstentions. Moskowitz ran on a platform that focused on her background in political organization and her work as the New York State Organizing Director of March For Our Lives — a student-led group focused on increasing gun control legislation.

Powers asked Moskowitz if she had any specific initiatives she was thinking about heading into the 2021–22 academic year. Moskowitz said she wanted to focus on equity and accessibility.

“One of the things I would want to try is to build some ramps around campus or have some alternative forms of accessibility,” she said. “We live on a hill, so it can be really hard and I think that is something that I want to focus on going into next year.”

“A lot of the time, you don’t see direct communication toward international students and I think it’s such a small population of the school, it’s easy for us to get overlooked, but then it’s also easy for you to provide to that small group of students,” Mhlanga said. “I think coming into this next year particularly, there’s a lot of questions that international students have about different types of vaccines, travel accommodations … And I think that’s one of the things that I would like to address.”

Sophomore Deontae Guy, incoming president of the SGC, said that sophomore Connor Watson will be the incoming chief of staff of the SGC. Watson previously served as the student liaison to the alumni board.

In Fall 2021, there will be another election for positions that were not filled in Spring 2021.