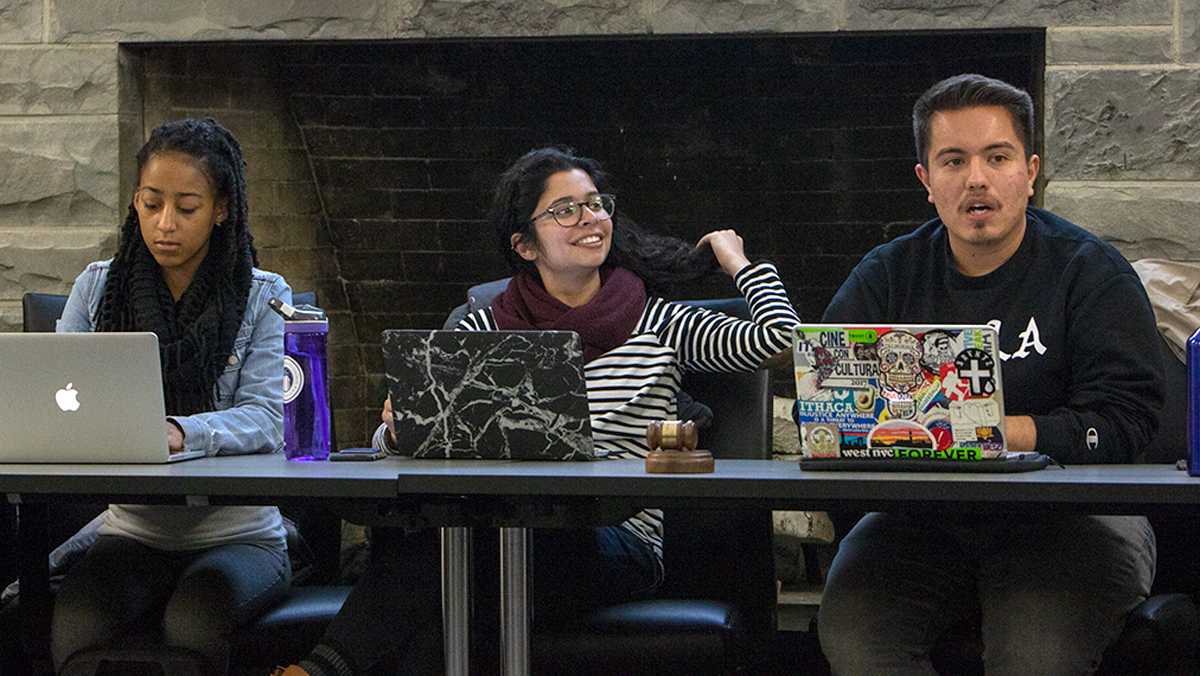 In addition to reviewing policies regarding student-faculty relationships, the SGC senate also received updates on the recent tuition increase at the college and concerns about mental health transport from SGC President senior Alyse Harris at the meeting.

Title IX Coordinator Linda Koenig came to the SGC meeting to gather the council’s thoughts on her suggested policy changes concerning faculty and student relationships, which can be found in the Ithaca College Policy Manual. Koenig said she wants to amend Section 2.44 of Volume II of the manual, which is the conflict of interests policy and does not require faculty or staff members to disclose relationships with students. Koenig said she wants the policy to require faculty and staff members to report engagements in romantic and/or sexual relationships with students.

“I would like to add this so that if there is a staff or faculty member here who does have a romantic relationship with a student, that that individual communicates it to their supervisor, to me, to the Office of Human Resources, so that we can talk through,” Koenig said. “Will there be a conflict of interest? What do we need to do to mitigate that conflict of interest if one exists?”

Junior Hunter Flamm, senator for the School of Humanities and Sciences, asked Koenig if there was a specific reason or incident that called for these changes to be made. Koenig said she decided to suggest changes because there was a conflict between the policies she had written and the policies approved by the Ithaca College Board of Trustees and wanted to make a compromise.

Koenig said that when she assumed the position of Title IX coordinator, she noticed that there was a discrepancy in the policies about student-faculty relationships. In the Sexual Misconduct, Domestic/Dating Violence and Stalking policy, it is stated that any romantic relationship between a student and a faculty member is not allowed at the college. However, the college’s policy on sexual harassment states that romantic relationships are only prohibited if the faculty member has “supervisory, instructional or evaluative authority” over the student.

Koenig provided a definition of affirmative consent, which is the voluntary and mutual decision among all participants to engage in sexual activities, because of Section 2.6 of Volume II of the Ithaca College Policy Manual. This policy states that students and faculty and staff members are not allowed to engage in romantic and sexual relationships because the faculty or staff member has grading or supervisory power over the student.

Koenig said this means that relationships between a student and a faculty or staff member who does not have supervisory or grading power over the student do not go against the policy.

“If you’re a student and you are a theater major, and you are never, ever, ever are going to take a physics course, it’s possibly okay if you consensually decide to date someone who teaches physics,” she said.

Koenig said she would also like to change Section 2.20.5 of Volume II of the Ithaca College Policy Manual, which addresses conflicts of interest in monetary donations for research, to require faculty to disclose if the source of the funds is a romantic and/or sexual partner.

Junior Devin Kasparian, senator for the Roy H. Park School of Communications, voiced his concerns about whether or not those engaging in the relationship will feel comfortable disclosing their relationship, especially if it is a same-sex relationship, and the parties involved have not told others about their sexual orientation.

Koenig said the individuals can talk to the Title IX coordinator or human resources, which are confidential.

She said she believes that faculty or staff members have a responsibility to disclose information about their relationship if they are involved with a student.

Koenig also presented these proposed changes to the faculty council at its Oct. 2 meeting.

During the Oct. 29 SGC meeting, the SGC also discussed the recently announced increase in tuition at the college. Harris said she met with President Shirley M. Collado and her Senior Leadership Team to discuss the tuition increase.

The board of trustees approved increases in the prices of tuition and room and board at its Oct. 17 meeting, making the total cost of on-campus living $61,132 for the 2019–20 academic year.

Harris told the SGC about her meeting with Collado and the Senior Leadership Team and relayed the information that she learned in the meeting to the council. Harris said that a contributing factor of the tuition increase was the strategic plan, which is the college’s plan to achieve its mission of creating and maintaining a reliable infrastructure.

“One of the main things President Collado wanted to impart was that they’re planning for the future,” Harris said. “With the strategic plan underway, there needs to be financial reconstruction to do all of the things they want to do. They’re trying to be extremely intentional about how they’re doing that and directly how it impacts the students.”

Harris said the Senior Leadership Team plans to research the pricing on campus, and how to bring costs down in the future.

“They even mentioned that they’re going on a campuswide tour of all of the different facilities, and really evaluating what we have here and how we’re pricing it,” she said. “They’re looking at all the options as far as dining and ways to make everything more affordable in the future.”

Junior Senator-at-large Vaughn Golden said he was very frustrated about the lack of communication between the SGC and the administration and said he would like to meet with them to talk about his concerns with the increase.

“I would like to express that I think it’s nice that the administration has transferred its message through Alyse to the SGC, but when it comes to a tuition raise like this, personally, today I spent a good 15 minutes of my time detaching a microwave from a microfridge on the loading dock of Park so I could have a microwave to heat up my dinner when I spend 15 hour days here,” Golden said. “So, while I appreciate the fact that the administration can send out an email after a board of trustees meeting where they agreed to raise tuition, I think it would be nice if they made the gesture of appearing before the SGC.”

Harris said she also attended a meeting of the Public Safety Student Engagement Working Group, where she said mental health transport was discussed in depth. She said a point of contention was the fact that the Office of Public Safety and Emergency Management has the ability to handcuff students having mental health crises if they are deemed to be a threat to themselves or others.

“It doesn’t change the fact that it’s still a very traumatic and stressful experience for those who are going through that, and some of the people around them,” Harris said.

She said Public Safety is working to find ways to address the issue.

“Together, they are working really hard to make sure that they’re taking care of students and thinking about other ways that they can be involved in a way that might not be so jarring for students who are going through emotional times,” Harris said.