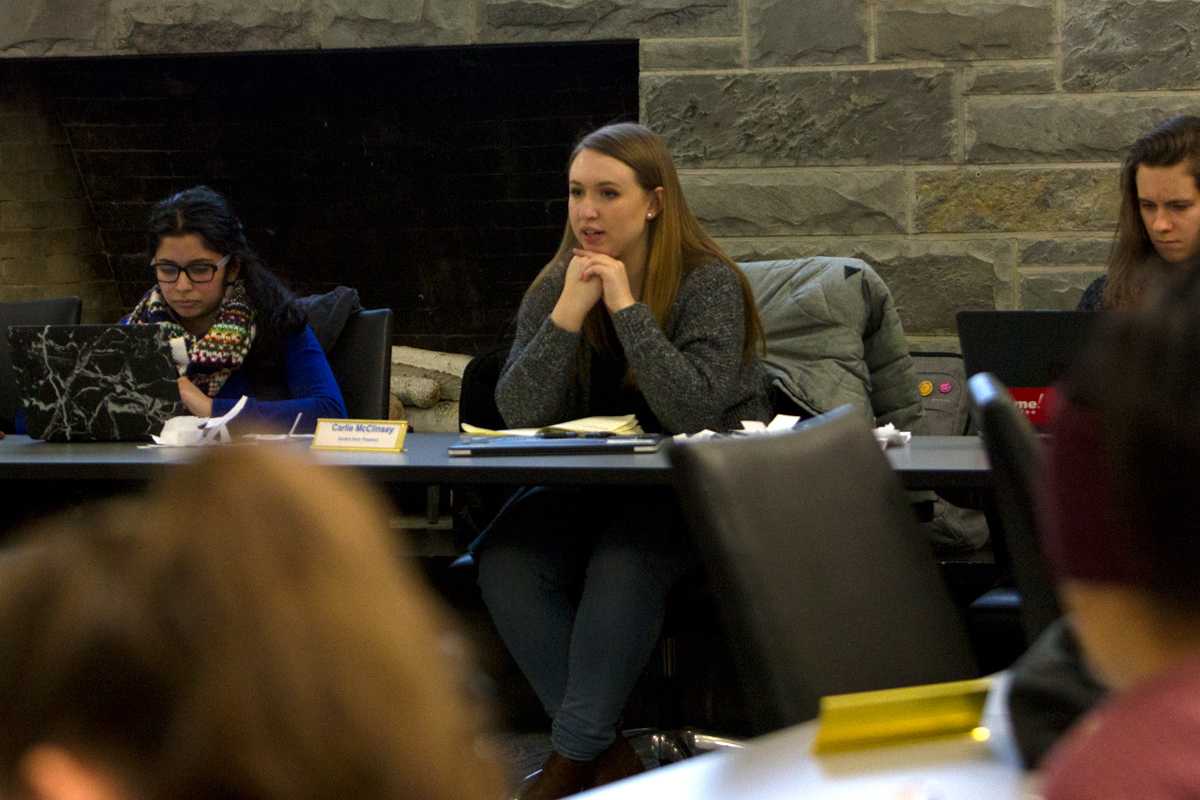 The Ithaca College Student Governance Council elected a new Class of 2018 senator, Class of 2021 senator and senator–at–large during its Feb. 12 meeting, but there are still nine vacant senate positions to fill.

De Lisle proposed amending the Integrative Core Curriculum and clarifying and communicating with constituents the role of the SGC on campus as two areas on which she plans to focus while serving as senator. De Lisle said she does not want to discard the entire ICC, but she said it needs to be reworked since it is a common complaint she has heard voiced by the student body.

“I think it’s a great idea because it gives you a lot more freedom with the gen-ed requirements that are typical across schools,” De Lisle said. “But it’s definitely something that needs improvement because a lot of students express frustration about it.”

Specifically, De Lisle wants to simplify the artifact–gathering process of the ICC e-portfolio and create a better advising system for students so they do not accidentally take classes that satisfy requirements in both the ICC and their major but cannot be applied to both.

Smalls said she plans to focus on increasing diverse student engagement — such as encouraging student–athletes to become involved in organizations outside of their respective sports — and encouraging a wide range of student experiences on campus while serving as the Class of 2021 senator. She said this increase of diversity in regard to student engagement could potentially be modeled after the college’s Housing Offering a Multicultural Experience residential program, in which Smalls is a participant. Just as HOME requires participants to attend an on-campus event outside of the residence hall and a faculty workshop and any other activity or event of an individual’s choosing, Smalls said she wants to implement similar measures for freshmen, possibly through the freshman seminar.

“Essentially what I want to do is implement HOME in the first-year seminars, and in this way first-year students can realize all of the resources on campus and find their niche,” Smalls said.

Busam said she hopes to put the diversity and inclusivity initiatives proposed by President Shirley M. Collado at the forefront of the SGC’s priorities and hopes to increase the transparency of the SGC. As a senator–at–large, Busam said she will incorporate her varied extracurriculars — including varsity crew and the Model United Nations Club — into resolving issues and supporting initiatives. By having access to multiple student populations at the college, Busam said she has a distinct understanding of what students want and need.

“I’d like to look more at the issues that the organization is tackling overall and helping in all aspects of college decisions rather than just representing varsity sports or just representing my class,” Busam said. “I feel I have experience in several different sectors of this college that I’d like to bring to the table.”

The nine remaining vacancies may not be filled immediately, but the SGC will likely gain more senators occasionally as the semester progresses, SGC President junior Carlie McClinsey said. Once the SGC’s new outreach program is implemented, more students may express interest in joining or become more aware of these vacancies, McClinsey said. New senate applicants also often come from staff or faculty recommendations, she said.

“In general, this new snack shack idea is going to hopefully garner a lot more knowledge about SGC in general,” McClinsey said. “I think we may actually gain some members through conversations of students just coming in to grab a snack. … I’m sure they’ll be filled, and we already have a pretty decently sized group right now.”