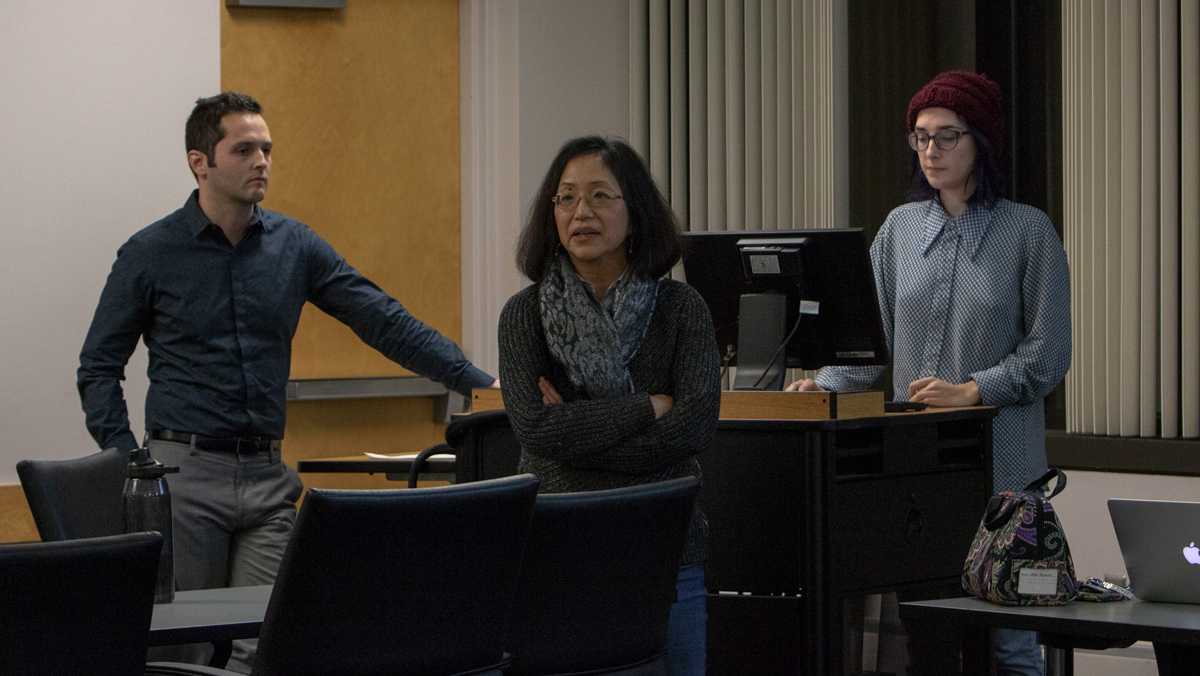 Representatives from the Office of Analytics and Institutional Research at Ithaca College spoke to the Student Governance Council at its Dec. 3 meeting about the 2019 National Survey of Student Engagement (NSSE).

Chief Analytics Officer Yuko Mulugetta, Senior Research Analyst Elijah Earl and senior President’s Fellow Anna Gardner presented their plan to increase the student response rate of the 2019 NSSE to the SGC to get the council’s feedback.

The NSSE is an annual survey that collects information concerning freshmen’s and seniors’ participation in programs and activities offered by the four-year college or university they attend. The results would be used to analyze and better understand levels of student engagement at the college but have not been used in previous years because of the low response rate.

Earl said the college participates in the NSSE every three years because only freshmen and seniors are allowed to take the survey. The three-year cycle allows the same cohort of students to take the survey, and the Office of Analytics and Institutional Research can see how students’ perceptions have changed from freshman to senior year.

Earl said student engagement is divided into two parts in the survey — the effort put in by the student and the opportunities provided by the college — that work together to engage the student.

“It’s both the amount of time and effort that you as a student put into your studies, but it’s also the amount of opportunities and ease with which the college allows you to do that,” Earl said. “There’s both the student part and the college part of it, and together we try to get the students as engaged as possible in meaningful academic activities.”

Mulugetta said the college has been participating in the NSSE since 2003 and has administered six surveys in total.

She said that even though the college has been collecting this data for the past 15 years, none of the data has been used from any year because of the perception that the response rate was too low. Mulugetta said the response rate to the 2016 NSSE was 29 percent of freshmen and 32 percent of seniors.

Mulugetta said the Office of Analytics and Institutional Research is working to get the response rate to the 2019 NSSE to be high enough so it accurately represents the surveyed population and so the data can be utilized.

“This time, we really want to coordinate our efforts so we can make the response rate as high as possible and we can use the information as a really good way to improve student learning, student life and the overall picture,” Mulugetta said.

Earl said that if the response rate is high enough, the data from the NSSE can be used to help make improvements with the strategic plan and the Integrative Core Curriculum. The strategic plan is the college’s five-year plan that is currently in the early planning, drafting and feedback stage. The ICC is currently under review by a committee comprised of faculty members and students evaluating its effectiveness.

Earl said the office is collaborating with the Office of the Provost, the Division of Student Affairs and Campus Life, Information Technology and other offices to raise awareness for the NSSE.

Gardner said that even though she is a senior and the usage of the data will not affect her, she feels it is important for her to take the survey because the information collected can be used to improve the college in the future.

She said that by participating in the survey, students who believe they are being overlooked can make their voices heard and help the college make improvements.

“By you and your peers responding to this, it is a way that the college can use and hear your voice, and a lot of people are always complaining that no one’s listening,” Gardner said. “Well, this is one way that the college will listen to you. It’s going to be very valuable for the way that we move forward.”

Gardner said gift cards from Amazon will be offered as an incentive to participate in the survey, and reminders will be sent by email starting when the NSSE is launched in February 2019. Gardner said the Office of Analytics and Institutional Research is considering holding a launch party during which food will be served and students can fill out surveys.

Freshman Anna Costa, Class of 2022 senator, suggested the office reach out to the Residence Hall Association to have resident assistants help advertise the NSSE to the students in first-year residence halls.

Sophomore Allison Kelley, senator for the School of Business, said the office should create a board for students to put stickers on once they have finished the survey in order to publicly display that they have completed it.

“When they fill it out, they have the opportunity to put a sticker on something, like a leaf on a tree or something, to show that they’ve participated, played a part in the school and owned their due diligence as a student,” Kelley said.

She said that students should have a way to show that they helped improve the college directly after taking the survey and that this show of appreciation does not necessarily need to include a monetary incentive.

“They should get something out of it, not just like a gift card, but something immediate, showing their impact,” Kelley said.