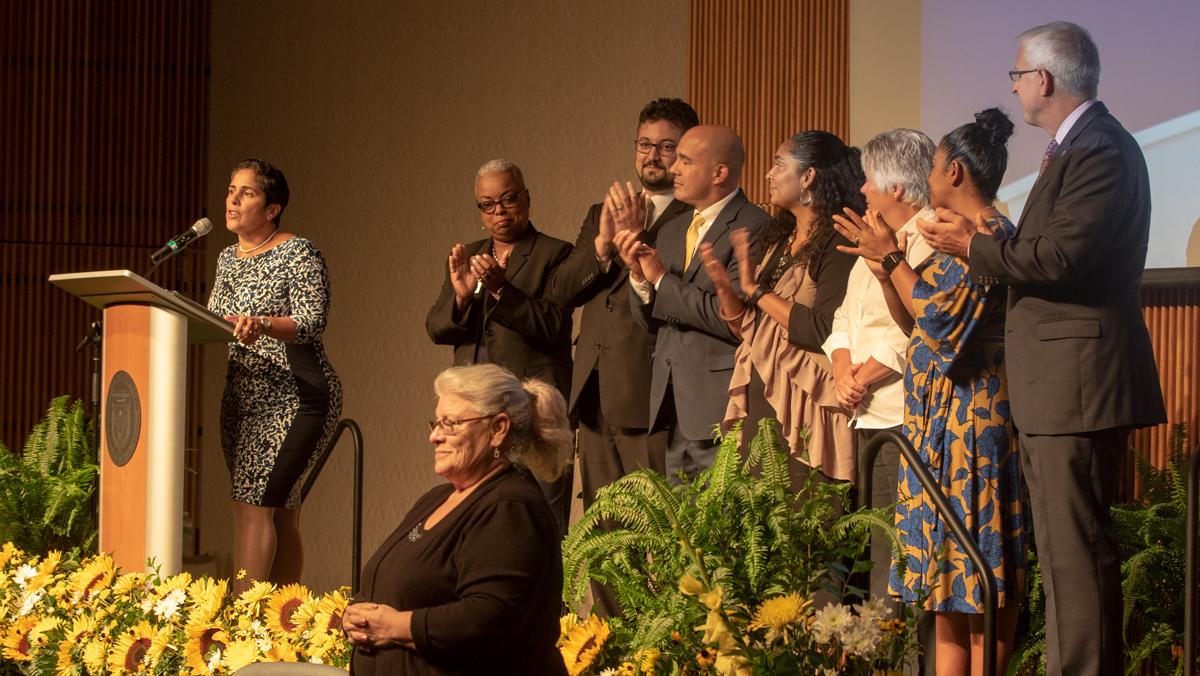 Under the first year of Ithaca College President Shirley M. Collado’s leadership, the community has seen significant changes among the senior leadership team as well as the restructuring of institutions on campus.

In the fall of 2015, the college witnessed protests that amassed hundreds of students rallying against what they critiqued as multiple racist events the administration did not adequately condemn. Following a semester of protests, open letters and multiple votes of no confidence against former President Tom Rochon’s administration, he stepped down, prompting a search for the college’s next president.

After Rochon’s resignation, Collado arrived as president in July 2017 and began defining her vision for the college. At the All-College Gathering held Aug. 23, the community learned about the first stages of the college’s five-year strategic plan and also heard about more developments for the upcoming academic year.

Shaping the future of the college

At the All-College Gathering, the five-year strategic plan was not presented as having overall goals or principles guiding it. Instead, the strategic planning design committee emphasized that an official plan with actionable goals will not be established until the committee receives feedback over the course of the next year.

“By the end of the spring we’re going to have the outline that really tells us where we are,” Freitag said. “We’re going to have a sense of what we’re going to do. So we’ll use the summer to draft, and then we’ll come back, and we will finalize the plan in the fall, design the implementation plan and then begin that process of continual reflection.”

Belisa Gonzalez, associate professor and director of the Center for the Study of Culture, Race and Ethnicity and strategic planning team member, said the design team has not yet provided structural themes and topics for feedback sessions because the team wanted the community to direct the conversation.

“In the feedback there…is still time to change the design,” Gonzalez said. “The concern we had was that if we presented themes, people would think they… had been predetermined and thus the future of IC was already set. This way the themes will emerge from the input from the community. And we are confident that they will. That is also why it is important for everyone to participate in the process.”

Unlike IC 20/20, which planned to implement initiatives over the course of 10 years, Collado’s strategic plan will address the next five years at the college. At the gathering, the design team for the strategic plan stressed the importance of engaging and involving faculty, staff and students in the new plan’s creation. This approach contrasts a perception of IC 20/20 expressed in an open letter written by college faculty in 2015, which described Rochon’s strategic plan as a top-down initiative that failed to incorporate campus community input.

Gonzalez said college constituents will be given new, innovative opportunities to contribute to the new strategic plan outside of traditional avenues, like emailed surveys asking for feedback. These new opportunities will be aimed to engage a greater diversity of participants, Gonzalez said.

“The design team wanted to create a process that created meaningful opportunities to contribute,” Gonzalez said. “By meaningful, we don’t just mean more opportunities for individuals to contribute, but really charging the working groups and steering committee to listen and be prepared to take those contributions from the community seriously.” 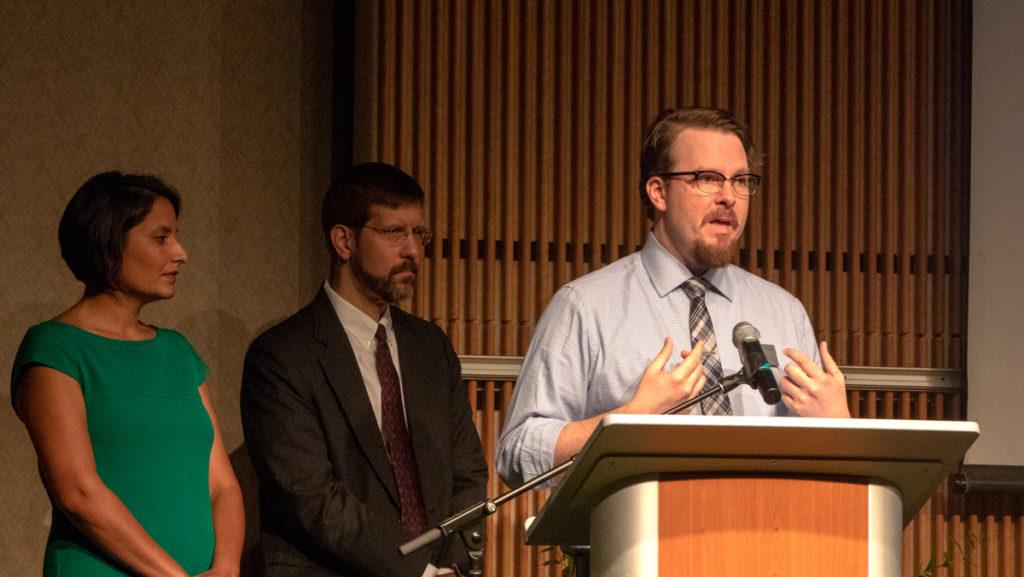 From left, members of the design committee for the strategic plan Belisa Gonzalez, associate professor and director of the Center for the Study of Culture, Race and Ethnicity Jason Freitag, associate professor in the Department of History, and Benjamin Costello, executive director of advancement services, present their initial planning at the All-College Gathering on Aug. 23 at Emerson Suites. (Julia Cherruault/The Ithacan)

Freitag presented the stakeholder groups that will be contributing to the structuring of the strategic plan. A steering committee of 12 to 15 people consisting of faculty, staff, students, alumni, trustees and community members will be overseeing the planning process and ensuring that it stays consistent with the process design, Freitag said. Freitag and La Jerne Cornish, provost and senior vice president for academic affairs, will be the co-chairs of the steering committee.

The strategic plan will first be approached by reviewing — but not rewriting — the college’s mission, vision and values. This aims to ensure that there are no obvious omissions in these statements and to keep the community at the forefront of the planning process, said Benjamin Costello, executive director of advancement services and team member.

The steering committee will also be engaging with the campus community throughout the process to develop themes — broader areas of focus to provide organization for the plan — which will directly derive from the college’s mission, vision and values. The design team will recommend approximately five themes. In order to better clarify the usage of a theme, Costello provided the hypothetical example of “student success.”

The themes will then be developed to create specific focus areas. Each theme will have its own working group, which will set goals for its respective theme. Goals will be paired with measurable objectives to concretely determine whether substantial progress is being made, Costello said.

Community members had a range of feedback to the plan, including hopes for incorporating student feedback and feedback from groups not traditionally represented.

Rose Howard ’04, assistant professor in the Department of Theatre Arts, has a one-year position, and she is worried that students, faculty and staff with temporary positions who offer different perspectives will be shut out of the process. In particular, she mentioned diversity scholars, international students visiting the college on a one-year scholarship basis and adjunct and visiting professors who work on limited contracts.

Patrice Pastore, professor in the Department of Music Performance, said it is promising that the strategic plan aims to welcome a variety of ideas from as many people as possible. However, given the introduction of a new strategic plan, Pastore said she is concerned that previous institutional-wide plans are often concluded without reflecting on whether the proposed goals were met.

“It sometimes gets hard to be enthusiastic about the announcement of another strategic plan,” Pastore said. “You sort of wonder, ‘what happened to the last one?’ … If it failed, what did it need to do differently? If it succeeded, why are we doing another one?”

She also said she is glad that the process is operating slowly because she thinks it will create a better–developed plan, as opposed to plans like IC 20/20, which she said she felt was developed hastily by Rochon’s administration.

Collado also updated the college on new developments in human resources, finance, academic affairs and student affairs that would take effect during the 2018–19 academic year.

Collado announced that there will be another round of seed grants this year. The Seed Grant Initiative is an opportunity for teams led by faculty or staff members to receive funding for interdisciplinary projects designed to improve the college. Proposals that are selected may receive grant funding ranging from $2,000 to $25,000. She also recognized the Presidential Fellows for the 2018–19 academic year.

The college’s operating budget has also decreased from $20 million to $5 million, Collado said. She said she attributes the decrease in budget to the college’s financial aid, new technology, benefits and deferred maintenance costs.

Cornish introduced two new initiatives sponsored by the provost’s office with Wade Pickren, director of the Center for Faculty Excellence. She said there will be a new Provost Colloquium Series which will aim to showcase the accomplishments of Dana professors and the 37 faculty members who were on sabbatical over the past year.

Another initiative coming out of the provost’s office will be the Chair’s Academy, a program that aims to elevate the roles of department chairs, make their responsibilities clearer and revise compensation structure.

Later in the gathering, Tim Carey, associate vice president for Office of Facilities, said there is one buyer interested in the president’s mansion on Fountain Place.

Collado did not mention the program review for the Integrated Core Curriculum that will occur this year. The Middle States review team gave binding recommendations to the college to make changes to the ICC. Dave Maley, senior public information officer at the college, did not answer why Collado did not mention the ICC review at the All-College Gathering. He said the co-chairs for the review committee have been selected and will be revealed when the membership of the entire review team is announced.

Personnel changes over the past year

Collado is also finalizing her senior and lower-level leadership team.

La Jerne Cornish is the new provost and senior vice president for academic affairs. She succeeded Linda Petrosino, who has served as interim provost since August 2016.

Collado also announced over the summer that Guilherme Costa will become the new vice president and general counsel and will assume his position Sept. 10. He is also serving as secretary to the Ithaca College Board of Trustees. He will be succeeding Nancy Pringle, senior vice president and general counsel for the Division of Human and Legal Resources, who will remain as executive vice president until her retirement in June 2019. She will work alongside Costa during his first year at the college. 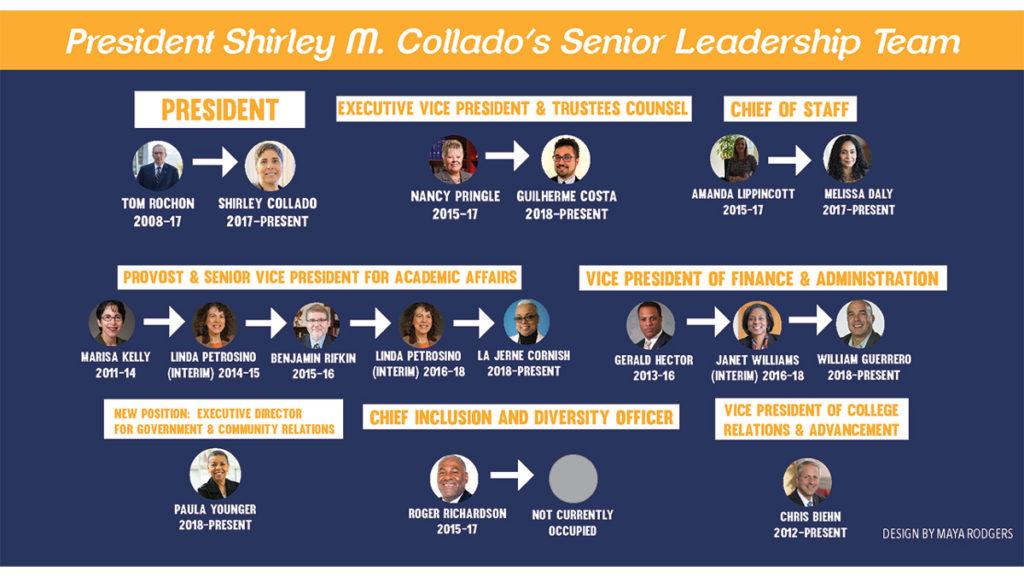 Collado also created the Division of Student Affairs and Campus Life, which is no longer under the provost’s portfolio, and appointed Rosanna Ferro in Fall 2017 to head the division as vice president.

Bonnie Prunty assumed the role of dean of students, a new position created by the Collado administration, June 1. She oversees the Office of Residential Life and Judicial Affairs, Case Management and the new Office of New Student and Transition Programs. Prunty is the former director of residential life, and Ron Trunzo is currently serving as the interim director.

Personnel changes made throughout Ithaca College