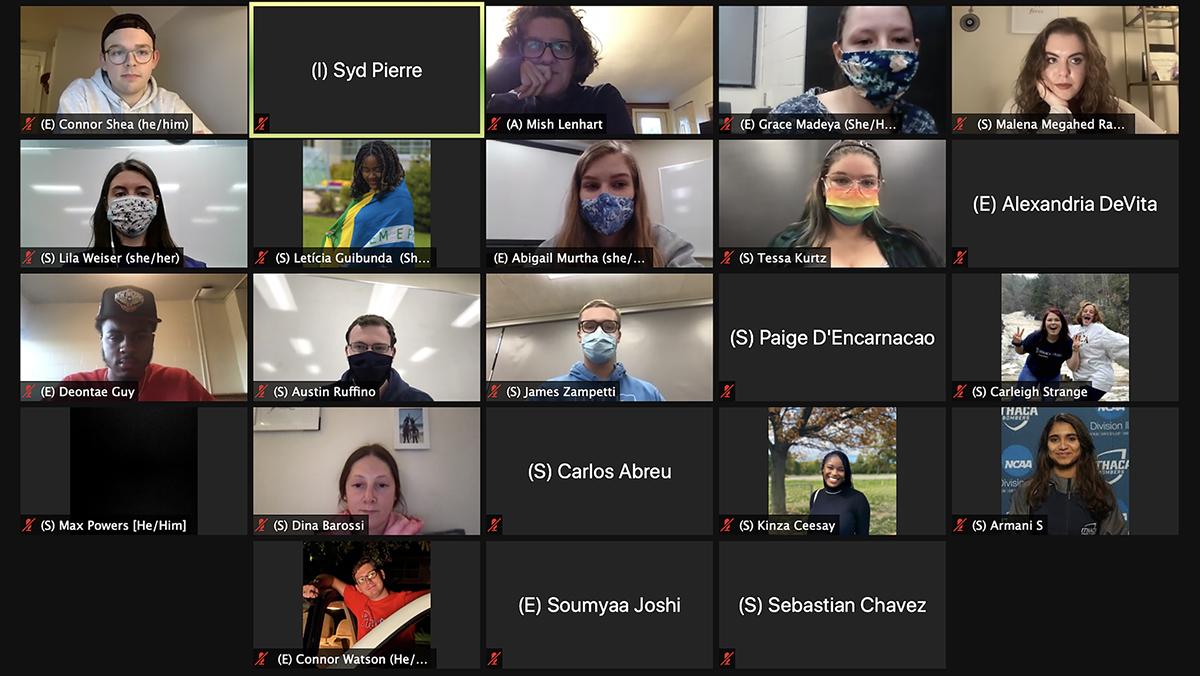 The bill also resolves that one day each academic year should be dedicated to celebrating and promoting sustainability and social justice projects and that the college should strengthen its involvement with the local community in terms of sustainable organizations. It also resolves that the college should have accessible data and community education, create a sustainability website section and establish a social media page centered around environmental stewardship.

“The main question we want to ask ourselves when making this bill is, how can Ithaca College be at the forefront of sustainable colleges?” James Zampetti said. “And the answer really, for a student-led organization like [the] Student Governance Council, is to change the campus culture.”

The SGC passed the Meeting Vote Eligibility Amendment with a vote of 13–0 with one abstention. The amendment amends Article IV, Section 8, Subsection 5 of the SGC Constitution to clarify that executive board members, students at large and other non-senators will not be able to vote during senate meetings. The bill was sponsored by senior Abigail Murtha, senate chair, and co-sponsored by Kurtz.

The SGC also passed the Bill Follow-Up Timeline Amendment with a vote of 14–0 with no abstentions. The amendment updated the constitution to create a timeline for the finalization process of bills passed by the SGC. The bill added a section to state that bills must be sent with all of the edits, bill number and final vote to the president of the SGC, senate chair, chief of staff and website manager within one week of passing.

The bill was also sponsored by Murtha and co-sponsored by Kurtz. Murtha said the SGC has had a significant problem getting members to send finalized bills to the relevant people on time during the semester.

The SGC also passed the Confirmations Calendar Amendment with a vote of 14–0 with no abstentions. The bill adds a new sub-subsection to Article IV, Section 9, Subsection 7 of the constitution to state that confirmations for new senate members should not coincide with elections and should be paused one week prior to the campaigning period for election cycles.

The bill was also sponsored by Murtha, who said there are inconsistencies regarding the amount of time confirmations could be open. She said the SGC could have run confirmations for open positions last week during election season, which she thinks is unfair.

“That’s the difference between someone having to pull a full-on platform presentation and go through the campaigning process and everything, versus someone who just has to come to our meeting for 20 minutes and then just get voted in by the Senate and leave,” Murtha said.

The SGC passed the Student Organization Bill Sponsorship Amendment with a vote of 14–0 with no abstentions. The bill amends Article IV, Section 10, Subsection 2, Sub-Subsection B of the SGC Constitution to state that bills can be sponsored or co-sponsored by anyone, but student organizations co-sponsoring bills must include the members of the organization who want to co-sponsor the bill when they add their organization’s name onto a bill. The bill was previously tabled at the SGC’s April 5 meeting.

The bill was sponsored by Ruffino and co-sponsored by junior Leticia Guibunda, international senator; sophomore Grace Madeya, vice president of business and finance; and Weiser.

The SGC also passed the Allocation Handbook Amendment with a vote of 14–0 with no abstentions. The bill was sponsored by junior Max Powers, current senator-at-large, Ruffino and Madeya. The bill amends a previously passed bill to state that the SGC will fund travel registration fees permanently, not just for the 2020–21 academic year.

The SGC met with representatives from Human Expression of the Arts: A Reciprocal Development (HEARD) and the Students of Color Coalition (SOCC) to discuss both organizations’ accomplishments over the semester and plans for future collaborations.

HEARD provides creative arts outreach and programming to residents at MacCormick Secure Center, a juvenile justice facility in Brooktondale, New York. Junior Julia Bertussi, president of HEARD, said the main mission of the organization is to engage in social action surrounding the prison system. She said students have not been allowed to visit the center due to COVID-19 but have been facilitating an art exchange program by mail.

Senior Connor Shea, president of the SGC, asked if HEARD had been able to present budget requests to the SGC.

Bertussi said the organization has submitted budget requests in the past to meet its traveling and art supplies needs but has not been taking advantage of the funding this semester due to the pandemic. She said the group would hopefully like to expand its outreach in the future.

“We are more than happy to brainstorm — we have a bunch on the table — it’s just a matter of being able to actually do the things that we usually do, and so many restrictions are in place right now that make that so difficult,” Bertussi said.

Senior Alex Paredes-Ruiz, co-chair of SOCC, said SOCC is in its second year of being recognized as an official student organization. He said the coalition has been focusing on creating a space for students of color to talk about their experiences.

“I think in a year where we’ve seen a lot of racial trauma and a lot of racial violence, especially nationally and especially in many ways on campus — I know specifically speaking as a theater student and as we saw last fall with the letter that came out — I think many of us have been very exhausted and tired,” Paredes-Ruiz said.

Murtha asked how the relationship between the SGC and SOCC would look moving forward in regard to the SOCC senator position.

Paredes-Ruiz said the SOCC senator role has been a big discussion point for the future of SOCC. He noted the discussion the Cornell Student Assembly had about disarmament of the campus police.

“That’s an important thing because the basis of that was talking about … anti-Blackness and police violence that can exist,” he said. “Granted, there’s a different situation there, but it really makes you think a lot about what’s the model of that and what some ways that we can improve on that, in terms of supporting our students.”