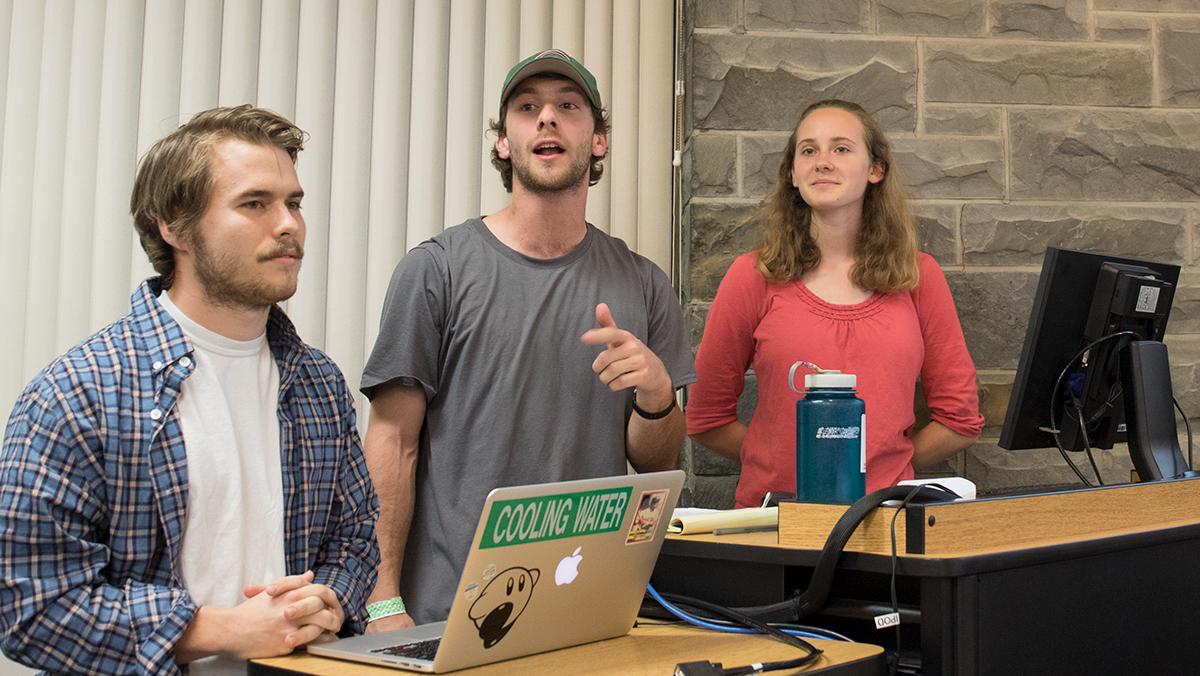 The Turf Yavits Field bill proposed creating an ad hoc committee that would meet in the fall semester to discuss the possibility of installing a turf field on Yavits Field, located next to the parking lot near the entrance to the Office of Public Safety and Emergency Management. Most club sports on campus use the field. The committee would be headed by the clubs sports senator — a position that was added by the constitutional changes made later in the meeting.

The bill was sponsored by sophomore Kirby Wilhelm, who is not on the SGC but participates in club rugby; Mike Moritz, Class of 2019 senator; and Mara Erb, Class of 2018 senator. Dozens of club sports teams representatives attended the meeting to show support for the bill.

According to the bill, Yavits Field is unplayable from late fall to early spring because of how wet the fields get from the weather. This limits the amount of practice time that most clubs sports get, because varsity sports utilize Higgins Stadium, the only other turf field on campus.

Converting Yavits to a turf field and adding lights would make it more available to the 13 club sports on campus that use fields, according to the bill. Erb said it would likely cost between $1.3 and $2 million to install but would not cause a big increase in tuition because the committee would explore alternative ways of funding it, including seeking donations from alumni.

To get support for the bill, Erb, Moritz and Wilhelm circulated a petition that garnered nearly 900 signatures from students.

The bill passed 15–0, with one abstention. Following the passage of the bill, the SGC made changes to, and voted on, a new constitution.

Every two years, the Organization Review Committee within the SGC evaluates the SGC constitution and votes on a revised version. Senate Chair Carlie McClinsey said the process will be beneficial for next year’s SGC.

“I think going through ORC was really beneficial to the eight senators who will be returning next year,” she said. “I think that creates sustainable leadership because we now have senators that are informed about the rules and how the organization works a little bit better.”

Most of the changes made to the constitution were related to spelling and grammar issues, but there were a few tweaks made to the student governance process.

Another amendment requires the SGC president to meet with the college president and provost at least once per academic block. Lastly, the transparency director will now determine the constitutionality of SGC bills instead of the senate chair.

The new constitution passed 15–1, with one abstaining. The Elections Act, which dictates how elections are run, had no major changes made to it. It passed unanimously, 17–0 with no one abstaining.

Sophomore Conor Friend was the only senator to oppose the new constitution, saying he felt it did not address some of the issues he wanted it to. He said he wished the senate chair had voting powers in the Senate instead of the executive board and that the Student Bill of Rights was separate from the SGC’s constitution. Overall, he wanted to make reforms to the SGC’s constitution so that it would function more like the federal government.

“I think there are things that the U.S. does that I think a lot of senators are just overthinking,” he said.

At the end of the meeting, Student Liaison Lima Hossain announced that the Alumni Board had selected freshman Guillermina Castro as the student liaison for next semester.

The last SGC meeting, which will be held May 1, will be a meeting for this year’s SGC council to transition to next year’s elected SGC council.