SGC wraps up semester by voting in favor of Shared Governance 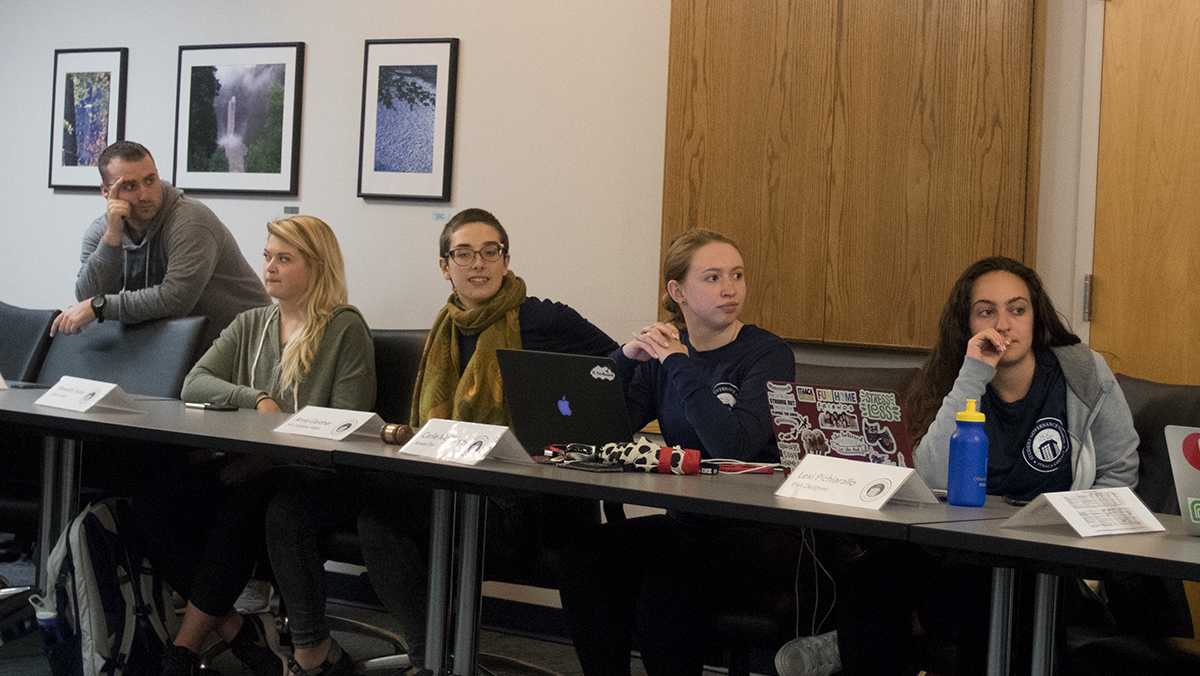 Ryan King/The Ithacan
The eight returning senators elected to serve for the 2017–18 academic year voted to elect freshman Farwa Shakeel as the senate chair for next semester’s SGC.
By Ryan King — Staff Writer
Published: May 2, 2017

During its final meeting of the school year, Ithaca College’s Student Governance Council announced its vote against tabling the latest draft of the Charter of Shared Governance and selected next semester’s senate chair.

At the beginning of the meeting, outgoing SGC President Marieme Foote announced that the SGC voted against tabling the Charter of Shared Governance 59.1 percent to 40.9 percent. The voting took place online via OrgSync because the SGC did not have time left in the semester to hold voting during their meetings.

Four weeks ago, the Faculty Council voted in favor of tabling the charter, citing concerns that incoming President Shirley Collado was not involved in its creation. Foote said having the new president be involved with the charter contradicts the initial goal of having a college-wide governing body that makes bottom-up decisions.

“Obviously, we should definitely take Collado’s perspective into account in the future, but I don’t think that this should be the way for her to weigh in on what happens with the charter,” she said. “I think it should be the constituents that decide this with the board.”

The eight returning senators elected to serve for the 2017–18 academic year voted to elect freshman Farwa Shakeel as the senate chair for next semester’s SGC. The senate chair, a position that is currently held by incoming SGC President Carlie McClinsey, runs the SGC meetings and is required to be neutral during open discussions.

Shakeel currently serves as the secretary for the college’s Eastman/Lyon Community Council. She previously lost her bid to be Class of 2020 senator to freshmen Sarah Horbacewicz and Gabby Picca. She said she is grateful for the opportunity to serve on the SGC next semester.

“This campus has given me so much, and I want to give back,” she said. “I’m just really excited.”

Though she has had no previous experience working on the SGC, she said her experience on Model UN has given her a good amount of exposure to parliamentary procedures. She also said that she will have plenty of time over the summer to get up to speed on all of the SGC rules.

“I think I’m a really fast learner, and I’m sure that over the summer, I’ll get accustomed to it, and then when I come back in the fall, I’ll be ready to go,” she said.

After the meeting, Foote reflected on her time at the SGC.

“I really enjoyed working with such an amazing team and being able to connect with a lot of people on campus,” she said. “Being a student and also being student body president isn’t an easy job. And you’re asked to do a lot, [but] I think that in the end, this position is really rewarding.”

She said she has always felt that activism on campus is important and hopes that students will continue pushing for change.

“A lot of the problems that we see on campus extend far beyond our local communities but [are] also national and global,” she said. “And so, I would encourage our next e-board to continue working on those issues.”

McClinsey will take over as president of the SGC officially after Commencement. She said she felt the school year went well for the SGC.

“I didn’t expect it to come to an end so quickly,” she said. “But I’m really proud of the progress that SGC made and the progress I have seen SGC make with the new senate.”

She also said that next semester’s executive board already has a plan of action in place for next year and has divided up tasks for the board members to complete during the summer.