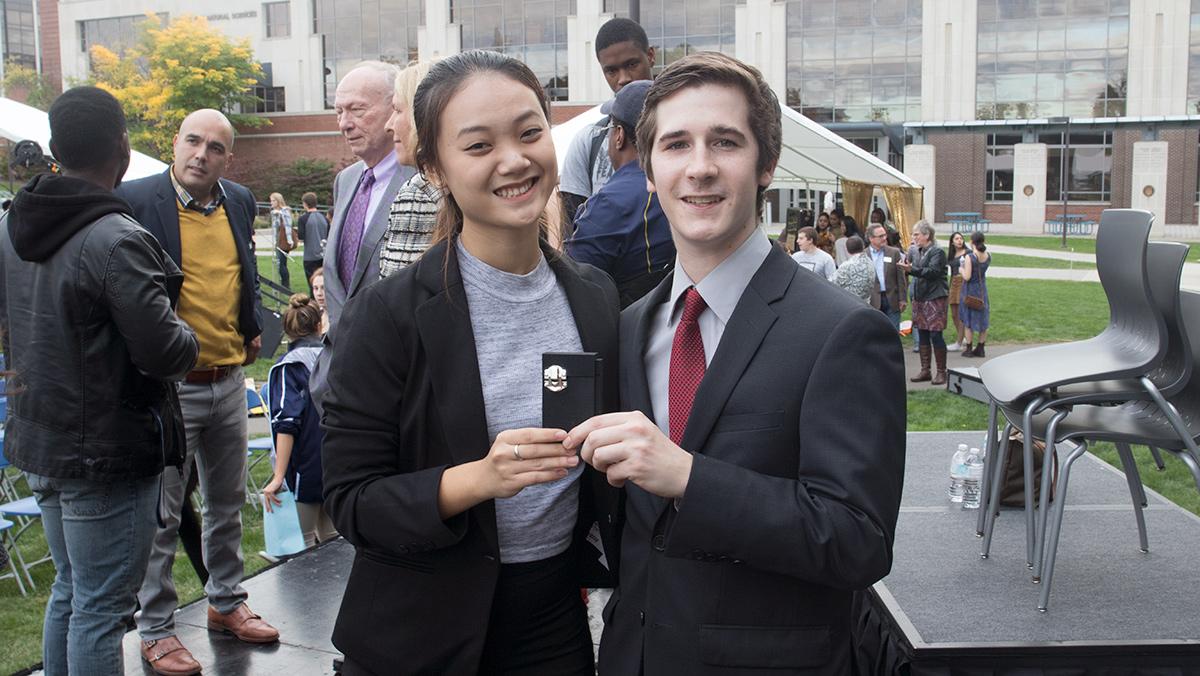 The college community gathered Oct. 7 for the event outside of Roy H. Park Hall. Park Tank is a competition where students pitch their media-focused business ideas to a panel of judges made of alumni and faculty members. The competition was incorporated this year into the first Park Digital Sideshow, which was a daylong showcase of media- and technology-related events led by students from the Roy H. Park School of Communications.

This year, Horner and Limsreng received the first–place prize of $500 for their invention, StopPack, which is a chemical-free device designed to help people quit smoking. Aniebietabasi Ekong ’16 did not attend Park Tank but was one of the other creators of StopPack.

The device is an electronic box smokers put their pack of cigarettes in to track how many they smoke per day, how often and where. Horner said the purpose of the pack is to track smokers’ activity and collect data that will then help wean them off their addiction without using chemicals.

Horner and Limsreng compared their invention to the Fitbit, an electronic bracelet that tracks steps, heart rate and activity throughout the day. With this technology, users visualize their smoking habits and set quitting goals for themselves. Horner said loved ones can connect with them through a smartphone app tied to the electronic pack technology to support them in their journey to quitting.

Horner said the group was inspired to create this product since they knew of family and friends who had been hurt by smoking cigarettes.

“As with any idea, it begins with identifying a problem to solve,” Horner said. “For us, smoking seemed like an obvious choice because it was something that hit home to all of us. We have all had family, friends die or be affected by smoking–related problems.”

He said they will use the prize money to build their business and to help cover the costs of production. Eventually, they are looking to incorporate their product with insurance companies because they often cover smoking cessation aids, Horner said.

Cara LeMieux ’02, a judge on the panel, said she was attracted to the product because she was a former smoker herself.

“I really think StopPack was taking what we know works in the health and wellness base and applying it in a new setting,” LeMieux said.

Senior Michayla Savitt won the second–place prize of $300 for her idea, The Scoop on Mental Health, a podcast that promotes conversations about mental health in the community. Those participating in the podcast also eat ice cream while talking about mental health.

“I’m hoping this has an impact just beyond Ithaca,”  Savitt said. “I hope it’s spread all over, on online platforms, that people talk about it.”

Savitt said she will use the money to fund the costs of producing and provide the “scoops” of ice cream that are eaten during her podcasts. She also said she wants to create a GoFundMe page to help the Center for Counseling and Psychological Services at the college.

Senior Omar Stoute received both the third–place award and the audience favorite award for his concept, Safe Ride, an application that connects students with safe, sober rides home from social events off campus. His combined award was $200.

Bryan Roberts, associate dean of the Park School and host of the event, said the show was a great success. He said the students who competed, as well as the ones who set up the event, can learn from the experience and continue to better their business and innovation skills.

LeMieux said she was impressed with the social aspect of the event because the audience could vote for a favorite and cheer on all the competitors. She also said she liked the way it was executed by an all-student team.

“Every time I come back, I’m more and more impressed with the ability of the students to put on professional-level productions, and this event was no different,” she said.